the innovator of Greek comedy 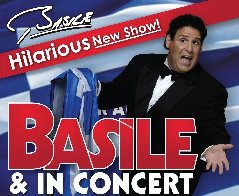 Today I’m really excited to be with the innovator of Greek comedy, a man who is graced the entire planet with his comedy series of  ”Growing Up Greek In America”! From North America to Australia throughout Europe and even in South Africa, Basile has brought his brand of humor to the English-speaking Greek communities throughout the world.

PK)… Am I leaving anything out Basile?

Basile) I would perform my Greek comedy act in Antarctica, but it’s tough to find any Greek Eskimos! There once was a Greek Eskimo named Nanook Papadopoulos… He opened up a diner somewhere in North Jersey specializing in whale & seal meat mixed with Gyro and with a touch of olive oil and feta… Just delicious.

PK) LOL, what’s the name of the diner?

Basile) AHHH, so you’ve been talking to my wife again?

PK) Basile, it’s a pleasure to actually have you highlighted in this month’s Hellenic News of America and I’m very excited to know that you will be at this year’s Hermes Expo in the beginning of the month in late March, early April. My first question is where haven’t you been?

Basile) Home! By the time I come back from England for my UK tour I come directly into Philadelphia to the Hermes Expo just to be here with you. I think my wife likes this idea, and my kids referred to me as “Theo Basile”, and that concerns me a bit! LOL

PK) Do I call you by Vasili or Basile?

Basile) Paul, whatever you feel comfortable calling me, works for me. However, since this is a Greek publication… Let’s go with Bob!

PK) Okay Bob… Let’s go with Basile! But, I must ask why Basile? I know every Greek here in North America and around the world knows you as Vasili. 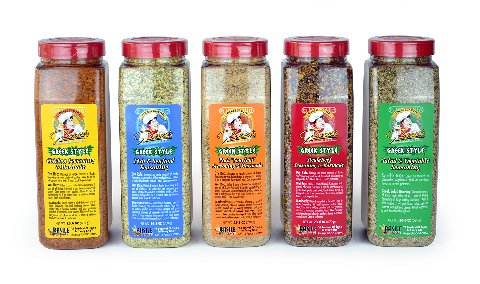 Basile) True, I was born in Woodstown/Salem, New Jersey and registered as Vasili Katsikis (Billy Goat), but since it was the height of the Cold War, my mother thought it sounded too Russian and felt that I would be discriminated in school, so because of that, she decided to change it to Basile.

Basile) Yeah, I joke about it in my “general audience” show, that my mother Rosemary and my father Herb had a great sense of humor and named me Basile!

PK) I know you have two different types of shows, that’s very impressive.

Basile) My general audience show that I perform is truly for the American public as well as all English-speaking people around the world. I perform regularly at the Borgata casino in Atlantic City, always a lot of fun, as well as performing at theaters, comedy clubs and concert venues all over the world.

PK) What type of material do you do in your general audience show?

Basile) As a monologist who is very physical in delivering his material, I talk about family life and everyday things that we all go through. I especially discuss my Greek background and heritage, and what it was like to grow up in a conservative Greek household within the confines of a wide open American society. It’s basically a compare and contrast situation. And thank God it seems that the American public loves it… You know Paul, people all over the world know the importance of what the ancient Greeks have given us today, the basic foundation of what we build our modern day society upon. I think that at times we need to remind society, especially here in North America of the gifts that the ancient Greeks gave to us: Democracy, Philosophy, Architecture, Art, Medicine, Organized Religion, Mathematics, just to name a few, were given to us by our forefathers, and what are we known for today… Yogurt and John Stamos!  Where did we drop the ball as a people?

PK) You make me laugh but you also make a very good point! However there is something else that we Greeks do very well with.

Basile) Besides entertainment, yes! We Greeks also know how to cook! I see all of these cooking shows that are on TV these days, and I laugh… Real cooking is within every Greek! If you look at every diner, restaurant, cafeteria, fast food restaurant, pizzeria, you will see that roughly 70% of all of those food-service outlets are owned by Greeks! That’s what I love about our work ethic! Non-Greeks at times will tell me, well the reason why Greece is in trouble is because the Greeks don’t really want to work or pay tax. And the only thing I can retort to say is that, we Greeks in North America are some of the hardest working, smart and driven individuals I have ever met my life! Our people ‘jumped off the boat” for a better life here in America and they began by washing dishes at a diner. But their work ethic was so strong, that within a 10 year period they wound up owning that same restaurant they washed dishes at! That’s what makes me proud to be Greek!

PK) Vasili, I must tell you it does my heart good to hear you say that and I couldn’t agree with you more! Was your father in the restaurant business?

Basile) Paul, we’re Greek… It’s the law!  LOL  I remember my father not being able to leave the restaurant for he could not be sure that the same taste and quality would be duplicated when he left the short order cook to relive him. That was very difficult for a child to understand that philosophy at that time. As I got older, I kept thinking about what my father would tell me, and then I thought, wouldn’t it be wonderful to have a product that would give you a wonderful, consistent taste delivered at a cheaper price, and still allow the end user to add that extra something to make it his/her own? I remember my father telling me, “I don’t even know if my kitchen staff can read English to know what ingredients I was using”. And Paul, I got to tell you it got me thinking. I have always been somewhat of a novice chef in preparing things in our kitchen for fun. Through the years I started to develop consistent blends that my family thought was delicious and it was also approved by both my mother and my mother-in-law!  Tough crowd!

I created a line of seasonings that I truly believe would bring a consistent flavor to everyone at home not knowing the explosion of sales that now have occurred throughout North America with my various Greek blends products. Basile’s Greek Style Seasonings was developed to help kitchens throughout the United States and Canada to bring that flavorful taste that we were all used to but can never seem to get a consistent handle on it. Paul, you have to understand there was just no way I could ever top anyone else’s recipe there, they’re all fantastic. But if there is a way that I can bring consistency as well as a delicious flavor at a low price and still offer the end-user to add that something special to make it their own, then I believe I’ve done my job. These five seasonings that I have are dedicated to Greek cuisine and offer an easy alternative to everyone in food-service.

I will be at the Hermes Expo introducing my line of Basile’s Greek Style Seasonings, and they’ll also be serving samples to prove to people that we have something SPECIAL in that 30 ounce bottle. I have one blend for Steak/Beef, Pork Souvlaki, Chicken, Fish and also Salad & Vegetable. All of these pre-blended seasonings are used as rubs & marinades and the Vegetable & Salad Seasoning also makes a fantastic Greek Salad dressing that’s easy to create!  Many restaurants have been using them in very creative ways to bring out the flavor of just not Greek cuisine but of all foods that they serve. Try it out for yourself and see.  PFG/Roma as well as Sysco Foods carries my products and I’m happy to be part of their list of wonderful food products they serve!

PK) Basile, I can’t wait to see you at the Hermes Expo…