We face at present a pressing problem created by the revived religious fanaticism in Islamic countries and the concomitant terrorism. This started by the atrocities of the 9/11/01 and culminated in recent attacks in Canada, Australia, and France. But, behind these recent terrorist acts there is a long history of fanatic religious intolerance generated by the spreading of monotheistic, proselytizing, and ecumenical faiths, like the messianic Christianity and the militant Islam. These faiths may appear to enlightened persons as dangerous deviations from both tolerant Hellenic Polytheism and pious Judaism, but the entire civilized world is deadly entangled by now in their snares of religious fanaticism.

A close look at the world history of the last two-thousand-years shows clearly that peace cannot exist between the followers of these monotheistic and fanatical faiths, who are prepared to fight each other and the followers of other religions by all means to the bitter end. For example, when the Christians acquired political power in 4th century AD, they turned their hatred and furry against the civilized and tolerant Ancient Polytheism. They destroyed the beauty of artworks and civil institutions that had been created by the Hellenic genus and secured by the might of the Roman Empire for many centuries. The Olympic Games were abolished and the Philosophical Schools in Athens were closed. As soon as these Orthodox Christians had finished with the Polytheists, they turned their intolerant zeal against their fellow Christians of a slightly different doctrine who opposed the Orthodox. These Heretics were mercilessly eliminated, just like the Pagans. With the rise of militant and conquering Islam in the 7th century, messianic Christian fanaticism met its match and was paid back by the same coin with added interest in terms of terror.

Three waves of militant Islam against Christianity (originally Orthodox and Catholic, but lately Protestant and Evangelical also) may be discerned in world history. In the first wave of militant Islam (7th-8th centuries), the Byzantine Christian Empire lost Alexandria and Antioch, among other great centers of Hellenic and Christian culture in the Middle East and in North Africa, while the faithful armies of Islam reached Spain in the West and India in the East. In the second wave of marching Islam (15th-16th centuries) Constantinople, the seat of Byzantine Empire, was conquered, while the fanatic followers of Mohammed reached Vienna in Central Europe and threatened the Holy Seat of Rome. The third wave of aggressively militant Islam is stirring up in our times (end of 20th and beginning of 21st century). If the winds of history are favorable to it, Europe may be caught napping again as twice before. The Islamic forces may be able now to conquer Rome, Vienna, Paris, and the rest of Europe, from within by infiltration and reproduction.

This third wave of militant Islam, which was stirred up at the end of the twentieth century, is now in full sway due to several historical reasons. I shall mention only two. The first and most important of these reasons was the end of the Cold War with the collapse of the Communist experiment in the Soviet Union and in Eastern Europe. The atheist ideology of Marxism-Leninism and the officially declared atheism of the then powerful Soviet State had an unintended effect: to bring closer together the traditionally hostile, constantly competing for world dominion, monotheistic and intolerant faiths of Christianity and Islam. These two fanatical faiths and sister religions of Hebraic roots had been fighting each other in one or another front for many centuries (from the 7th to the 20th century). Facing the common menace of Communist atheism, Christianity in all of its forms, but especially in its evangelizing form, and the revived purist form of Islam joined forces “miraculously” and fought successfully the Communists, especially in Afganistan.

The ultimate defeat of the invading Soviet forces in Afganistan was the second important factor that contributed significantly to the rise of the third wave of aggressive and militant Islam. From this fertile ground of fanatical Islamic forces at war sprang a few years later Osama Bin Laden and his Al Qaeda terrorist organization. On 9/11/2001, the hatred and horror of Islamic fanaticism reached the heart of the surviving superpower. The United States of America was “at war” and ready to fight back with force. Within moths, the American military might had dislodged the Taliban regime from its seat of power in Afganistan, and had disturbed the operational basis of Al Qaeda. But Osama Bin Laden escaped capture at the time, he went hiding and threatened revenge, while the US prepared to go to war again to disarm Saddam Hussein, in case the UN team failed to do so. The entire Arab and Muslim world is now stirred up once again, just as Bin Laden had wished. Hence there is need of political sagacity, foresight and practical wisdom.

At this critical moment of history the American Foreign policy should be extra cautious and dexterous to avoid the following dangerous pitfalls: First it would be a grave mistake if the unnecessary war in Iraq produces at the end a situation similar to that unfolding in Palestine lately. It would be tragic, if the superpower of USA, Leader of the Free World, ends up policing the Arabs and Muslims in the Middle East. It would be disgraceful if the government of the US imitates Israel’s government, trying desperately to hold down the rebellious Palestinians in the West Bank, who are ready to blow them-selves up in the name of Freedom and God. The only surviving superpower must have much higher and nobler goals than this. It would be sad if it were true, as some think, that US policy on Palestine is influenced by conservative Christians and based on “biblical prophecy” to the effect that, in order for Apocalypse to occur, “Israel must exist to be destroyed!”

Second, it would be equally unwise if US policy makers were to try to imitate the long-dead Turkish Empire in an attempt to bring together Muslims, Christians, and Jews in Palestine and the wider Middle East forcing them somehow to live together peacefully. This would not probably work in the long run because it would not be acceptable to the Arab Muslims. And this for three reasons: Firstly, Muslims believe that they, as true believers, are truly “the chosen people” of God, and thus must have a privileged position among the infidels, similar to Mohammed’s place of honor among all biblical prophets. Secondly, their historical experience as rulers over Christians and Jews for centuries gave the Muslims the “right” to mistreat systematically their Christian and Jewish slaves as dirt or, exceptionally, as second class citizens. Thirdly, the Arab Muslim perception is that, at the present, Missionary Christians and Zionist Jews are conspiring against the “true believers,” their perfect faith, and their rich-in-oil sands. In their eyes, the Western, Protestant, Evangelical, and Apocalyptic Christians are unlike the Orthodox and Catholic Christians of the past, who were either eliminated from their conquered lands completely and mercilessly, or else they were sufficiently domesticated through centuries of slavery.

Third, it may appear to some policy makers as a good idea, and perhaps a better alternative to the above-mentioned, to let different Muslim sects (e.g. Sunni and Shi’ia) fight and exterminate each other in the name of “true God.” In this way, it would become evident at the end, the really “true believers” who are favored by Allah above all others. But in fact, something like this occurred in the 1980ies in the Iran-Iraq war. Thousands of “believers” were killed, but the war ended in a stalemate. Besides, Prophet Mohammed, in his political shrewdness, has provided the necessary means to his followers for an easy and quick replenishment of the ranks of “holy warriors” by encouraging polygamy and high birth rates. So, by the end of this century, decadent, aging, and sterile Europe will be surrounded by an overwhelming, populous, and militant Islamic wave ready to take over.

Consequently, none of the above alternatives, in my view, would be an honorable and long lasting solution to the Islamic problem, for the Middle East, the Muslims, the US, the UN, and the world at large. Therefore, I think that this is the critical time for the great American Democracy to test the power of Democracy and Freedom, the truly “ideal weapons,” guided by rational philosophic thinking rather than by fanatical faith. One is bound to wonder about what would happen if the US, in cooperation with the UN, were to declare honestly that all Middle Eastern and other countries, which share in the Arabic language and the Islamic faith, are invited to form a “Union of Democratic Arab States.” This union could be patterned on the European Union, which is currently under way. Of course, these Unionists would have to come to terms with the State of Israel, which they should recognize with boarders to be determined equitably by the UN.

Such an enlightened and generous declaration could go even a step further. It could promise that, if the “United Arabic Democracies” behave well and democratically, engaging more in the studies of philosophy and science and less in religious studies, they could even be considered as a candidate for a permanent seat in the Security Council of the UN. For this honor they would have to compete with other potential candidates, e.g. India, Japan, and possibly another “Union of Latin American Democracies.” In this ideal situation of a humane and harmonious world of the future, there would not be any good reason for the European Union to have two permanent seats in the Security Council. By offering one of the seats to one of the proposed Unions of Latin or Arab Democratic States, it might perform a “miracle” of appealing to the dignity and pride of these groups of peoples with distinguished historical traditions. As Socrates would say, this may be a dream, but it is a noble dream, worthy of serious political consideration and deep thought.

Dr. C. Evangeliou is Professor Philosophy and author of several books, the most recent is Themata Politica: Hellenic and Euro-Atlantic, in which this essay was included too. 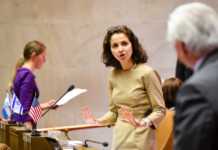 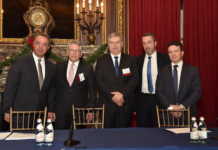 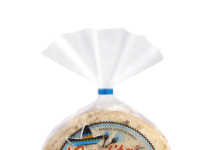 Restaurateur offers a little corner of Greece in Hamilton, NJ