Tsipras: We can create a better Europe for the future of its people 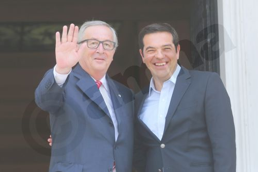 I want to welcome a true friend of Greece and consistent supporter of the European idea, Prime Minister Alexis Tsipras said on Tuesday welcoming the President of the European Commission Jean-Claude Juncker at the Maximos Mansion.

“Juncker comes at a time when Greece can turn page and after six years of recession and austerity, it can design the structural changes needed to achieve fair growth and a more optimistic outlook for the Greek people.”

He concluded that the difficult times will be dealt with the same wisdom as in the past, in order to create a better Europe for the future of its people.

Tsipras and Juncker discussed all the crucial issues for Greece and Europe, with Tsipras afterwards noting that the completion of the first review of the Greek programme ended a major chapter in the implementation of the Greek programme. Greece had now entered a path of growth, as shown by the figures collected by the European Commission and the Organisation for Economic Cooperation and Development (OECD), he said.

The prime minister noted that Greece has met the greater part of the commitments and now it was the turn of Greece’s partners to do the same, in order to speed up implementation of the agreement on the debt also.

Tsipras then referred to labour issues, noting that the recovery “cannot be based on the crushing of labour but on a productive model based on innovation and added value.” He called for a return of collective labour negotiations and said that some views heard on this issue were contrary to the European acquis.

The prime minister said the Juncker package would be used to promote such a model, noting that approval of financing must be given quickly to achieve recovery and a return to growth, while Greece must show that it is a country that is friendly to productive investors. To this end, Tsipras said the government was proceed to reduce red tape, enhance transparency, encourage entrepreneurship, boost scientific research, encourage training of staff and creating new infrastructure and a clear and stable taxation system.

“This is the direction in which we must move, not that of dismantling social rights,” he said.

Referring to the British referendum on the EU, Tsipras said that he, like Juncker, was in favour of Britain remaining but also noted that everyone should be concerned that Europe found itself facing such a close outcome. Europe was in a real crisis and needed to redefine its vision and prospects, convincing the European peoples that a common prospect was both necessary and hopeful, Tsipras said.

“To the dilemma ‘less or more Europe’, our reply is ‘better Europe,” the Greek prime minister said.

and ownership of Greek program

European Commission president Jean-Claude Juncker called for wide political support and ownership of the reforms included in Greece’s bailout program in his speech at the annual general meeting of the Hellenic Federation of Enterprises (SEV) in Athens on Tuesday.

He said all Greek governments must respect the deal achieved between the country and its creditors as this “may be the last chance to do what is good for Greece.” Juncker dismissed the conspiracy theories formed in the country, saying that on the contrary, he sees good will which is why he’d like to see all Greek governments respect the deal. He also said the government decides on the policy mix needed to implement noting reforms are not done to please Brussels or the creditors, but for Greek citizens and the country’s European future.

The Commission chief reiterated the message of hope for the country and declared himself a friend of Greece, adding that friends can sometimes say “some uncomfortable truths”, such as that this crisis is not just economic and social, but concerns the building of a modern state that cares for its citizens. He said mistakes have been made by both sides in the past few years but a Greek exit from the Eurozone was never an option.

Juncker also said that some people who suggested a “Grexit” are today urging Britain to stay in the EU and clarified that the country’s position is “safely anchored” in the Eurozone.

“The efforts made by Greece since the summer, create a window of opportunity. With the completion of the first review and the measures on the debt Greece has the opportunity to turn a page,” he said. “It’s not just the economic adjustment; but the modernization of the economy and the state, so as to create the right conditions for businesses, for tackling tax evasion, corruption, speeding up justice, establishing a modern system of social protection and managing borders,” he added.

He also stressed the EU funds that are available to Greece through the “Juncker plan” and hailed the people’s response to the refugee crisis.

Commenting on Britain’s EU referendum, he said: “History has taught us a simple lesson: that together we’re stronger and safer, achievements which will be jeopardized If there’s an exit from the EU.”

Greek President Prokopis Pavlopoulos met with the president of the European Commission Jean-Claude Juncker on Tuesday.

Pavlopoulos stressed the significant contribution of Juncker to Greece’s remaining in the eurozone.

“Greece, as the program review showed, has done its part and will continue with the big reforms in order to achieve recovery. But the contribution of the institutions is also needed, both for boosting liquidity and supporting investments,” Pavlopoulos underlined.

On his part, Juncker stressed that Greece and EU are together. “That is why I did my best to avert a Grexit. I never adopted the absurd way of thinking of those who wanted to take Greece out of the euro one. And finally we prevailed,” he added.