PM Mitsotakis: Turkey faces ‘not just Greece but all of Europe and our allies in NATO’ 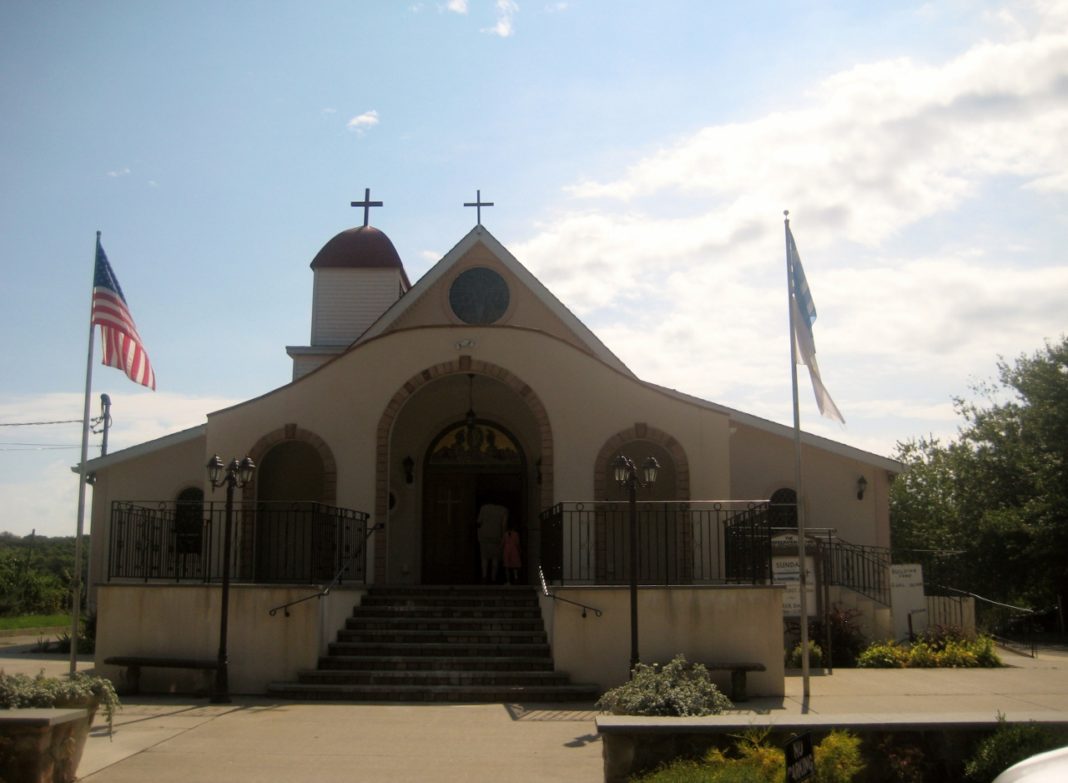 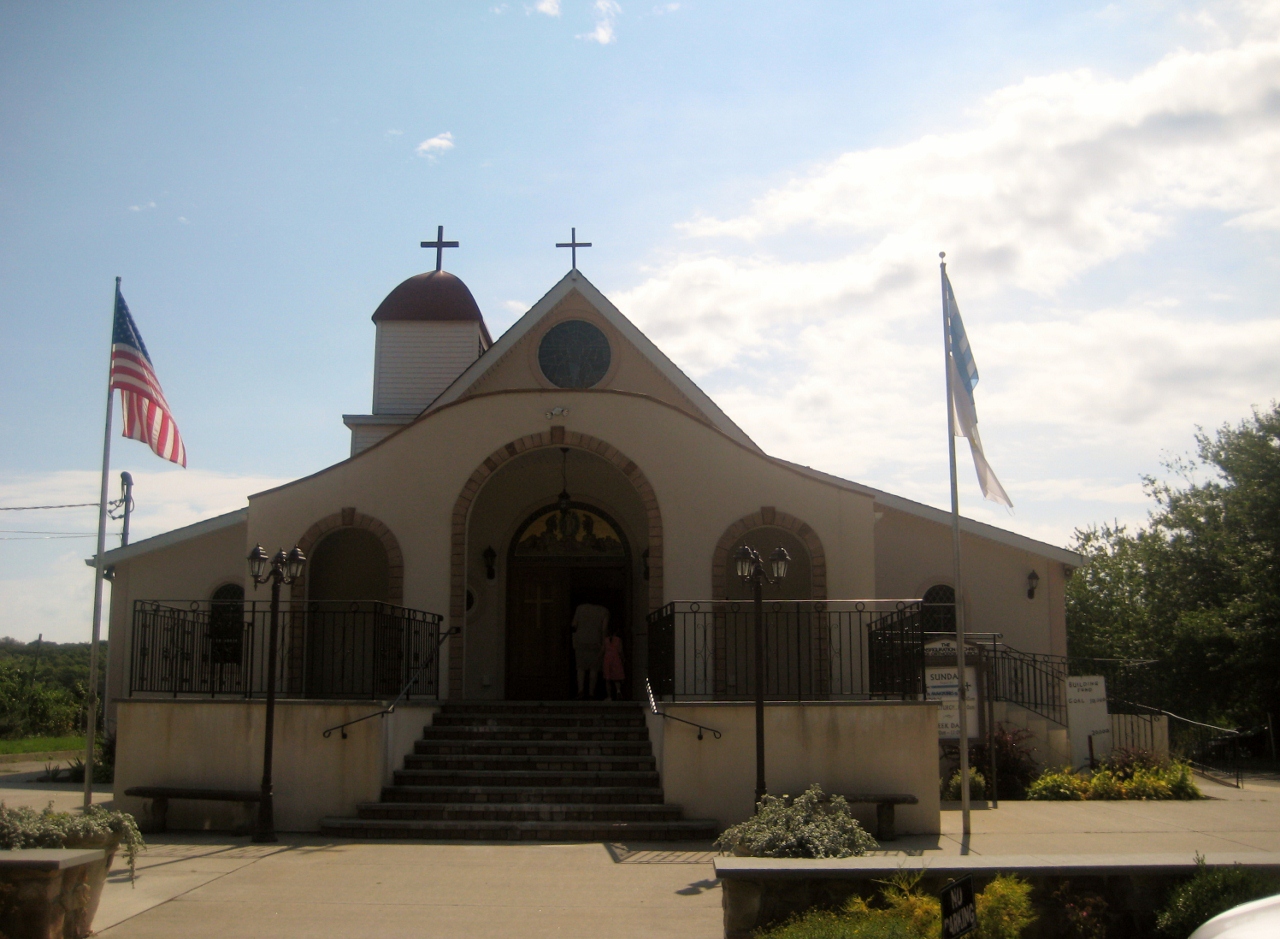 “A true leader has the confidence to stand alone, the courage to make tough decisions, and the compassion to listen to the needs of others. He does not set out to be a leader, but becomes one by the equality of his actions and the integrity of his intent.” —Douglas MacArthur. Anthony (Tony) Coutsouros, the son of immigrants from Heraklion, Crete, is changing the course of a rural church in Mattituck. His honesty, integrity and belonging to no established interests resulted in his election as President of the Transfiguration Church in Mattituck, New York. His new approach is altering the path the church has been taking since the demise of the WWII Greek and Cypriot Americans. The big change is in the reintegration of English in church life and accountability of all expenditures.

In the spring 2013, a letter was sent out to every parishioner by the newly elected President. “I am writing to you on a very important subject,” he said. “Your Beloved Church, at present, is in a dire situation: We have a very low Sunday Attendance; our Church membership is very low; Contributions are very low. I appeal to you to come to Church, to pray for you and your family’s good health and success. Bring your family and friends to feel the joy of the Church. Take Communion and purify your soul. Let’s get the feeling back of the first Christian religion that saved the world.”

He continued saying, “I pass Churches on route 25 and see their parking lots full. I have a heavy heart for our Church. I know you all love your church. I appeal to you to come and renew your commitment to Christ….The Church Council has decided with your support that all Memorial Kolyva be purchased through the Church, except for self-made Kolyva. All proceeds will go to the church 100%.” According to my sources, Mrs. Stella Giannoukakis has been preparing Kolyva since the spring. Her husband, George is in Church every Sunday helping. The new President donates his services repairing and performing custodial work. He is the only President in history to do such maintenance. 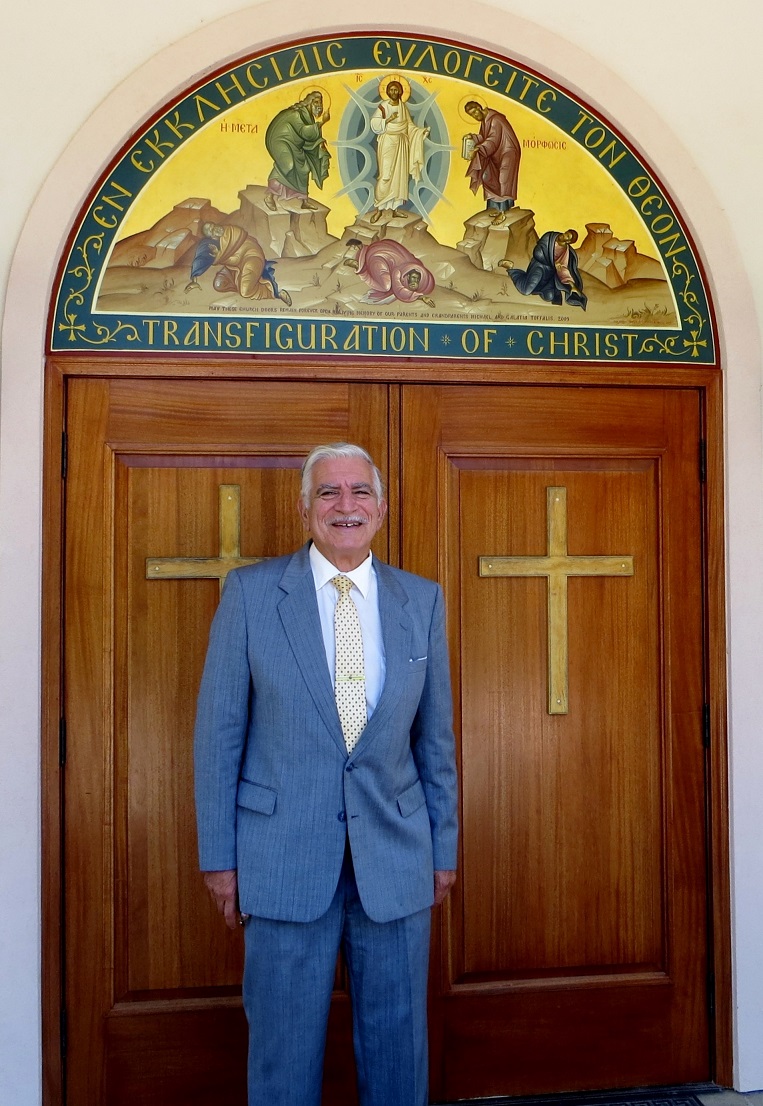 Anthony Coutsouros reached out to the Southold government and mass media for free services. Posters on a grand scale were seen on route 25 from Riverhead to Greenport, Long Island. I actually saw a Festival ad in the Greek News published by Apostoli Zoupaniotis. He initiated a weekly religious booklet with colorful byzantine graphics. A poem on Mattituck in Greek by poet/parishioner Anthoula Gatanas was included in the booklet once.

“I believe this is the Church of love and a bright light,” Anthony Coutsouros said. Some young persons’ view the Transfiguration of Christ Church as a last stop before final rest. Senior citizens, such as Anthony Coutsouros, are changing that image into a new beginning for many late in life. “I was metamorphosed at the Metamorphosis Church in Mattituck,” Coutsouros, a former widower, said. “I went to church depressed, without a reason to live. I saw an angel.” That angel was Elpida Ioanides, a widow for five years.” They were married in September 2011. Jimmy Mihaltses, a family friend, said, “Elpida is my wife, Katina’s, friend. We were her first friends at the church. She is a very good person, a brilliant person from Cyprus.” Elpida is aiding him in his community service through public relations. She has changed the decor of the church hall. “We are blessed from God to be at the Transfiguration Church,” she said.

Mr. George Zachariadis, a famous chanter and leader of the Greek Orthodox Church who was an immigrant from Nisiros, recently passed away. A genuine loss is constantly expressed. Mr. Jimmy Talas, the Choir master, passed away on August 6, 2012,resulting in the elimination of the choir. Themusical vacuum is being bridged by parishioners. Mr. Peter Pappas, former parish council president and a chanter of forty-three years, is now summer chanter. He has always donated his services. Mr. Pappas is encouraging members of the former choir to sing with him. A new chanter comes from the center of the island to create a magnificent Byzantine musical presence. A significant savings will be seen in the annual December 2013 Financial Statement.

“We invite all to our Festival July 26th, 27th and 28th,” said President Coutsouros. . “We want to inspire a new direction bringing in new persons and youth.” The phenomenal success can be attributed to the recruitment of dynamic community activist Manny Constantine. “My right hand lady is Barbara Thermos,” said the Festival Chairman. “My left hand lady is Emily Kavourias. I recruited vendors (over twelve) from New York City. A fabulous flea market, Greek cuisine and pastries are being offered. Saturday night, July 27th, we are having live entertainment.”The Monastery of Agion Panton from Calverton and Michael Peters of GW Greek Superstore in Astoria had booths.Manny Constantine’s family, who is from Asgata, Cyprusestablished residences in 1950’s Mattituck. His wife, Amal, and their children are continuing his family’s presence in the Transfiguration Church. Mrs. Eleni Condos was impressed with the volunteer t-shirts and youth presence. “My son-in-law could not find parking. He walked (1/4 mile) from our home to the church,” she said. “Everyone was cooperative with no arguments. I have been coming to the Festival in 15 years. This is the first time I saw a good system.”

“We ran out of food on Friday, July 27th,” said President Coutsouros. “We cooked fresh cuisine on Saturday morning that was completely sold out that evening. Sunday morning, we cooked again fresh food. None of our cuisine was cooked three weeks before. Everything was sold with persons coming back Monday morning, July 29th for more pastries.”

“Signs are all over the place,” said Lynn Wehrenberg, a staff member of Andrew Stype Real Estate. “I am going to tell my sister to come.” Mersina Stagias and her daughter Helen with Fotini Economou, all members of the Geros Tou Morea chapter of the Arcadian Federation in Astoria, were thrilled with their purchases. Nicholas Zannikos said “we are all working, supporting each other as a team.”

Marika and Jimmy Fotopoulos came from Flushing, New York, went fishing in Greenport and concluded their trip at the Transfiguration Church. This was the trend followed by others who ended an evening in Long Island with Greek cuisine. The 2013 Festival was the best in the history of the Church since it was established in the early 1970’s.

“We must have a cooperative effort of all five churches on the East End,” said Father Constantine Lazarakis, presbyter of Kimisis Tis Theotokou Greek Orthodox Church of the Hamptons to this writer. President Coutsouros said “we had a spiritual event on Sunday afternoon with the presence of Very Rev. Alexander Karloutsos, protopresbyter of the Kimisis Tis Theotokou Church and It was uplifting to have these international religious leaders with us. Father Alex supported our raffles generously.” President Coutsouros had a team of volunteers selling raffles for three days. The 2013 raffle will prove to be a phenomenal success. The President, Festival Chairman and staff have been spending several days in a monumental clean-up of the Church. Cooperation, unity and all working together was the trademark of the 2013 Festival.

Church Secretary Virginia Tripolitis created a unique Journal book with the help of the Greek-American community of New York City in 2012. Her outstanding work as Dance Journal Chairman is continuing. “This year Virginia Tripolitis is undertaking the publication of the 2013 Journal to honor the memory of George Zachariadis,” said energetic President Tony Coutsouros in an official document dated June 2013. One parishioner whose journal page was accidentallyomitted in the 2012 edition, more than doubled his/her donation in 2013 with a sponsor page to support the efforts of this extremely honest, dedicated leader. This trend is continuing. Many look forward to seeing a remarkable 2013 Journal. The 44th Anniversary Dinner Dance will be held on Saturday, October 12th evening in the Transfiguration of Christ Greek Orthodox Church Hall. The Journal pages are as follows: Sponsor Page, $500; Gold Frame Page, $200; Silver Frame Page, $150 and White Page, $100. For more information, call 631-298-9652 or e-mail [email protected].