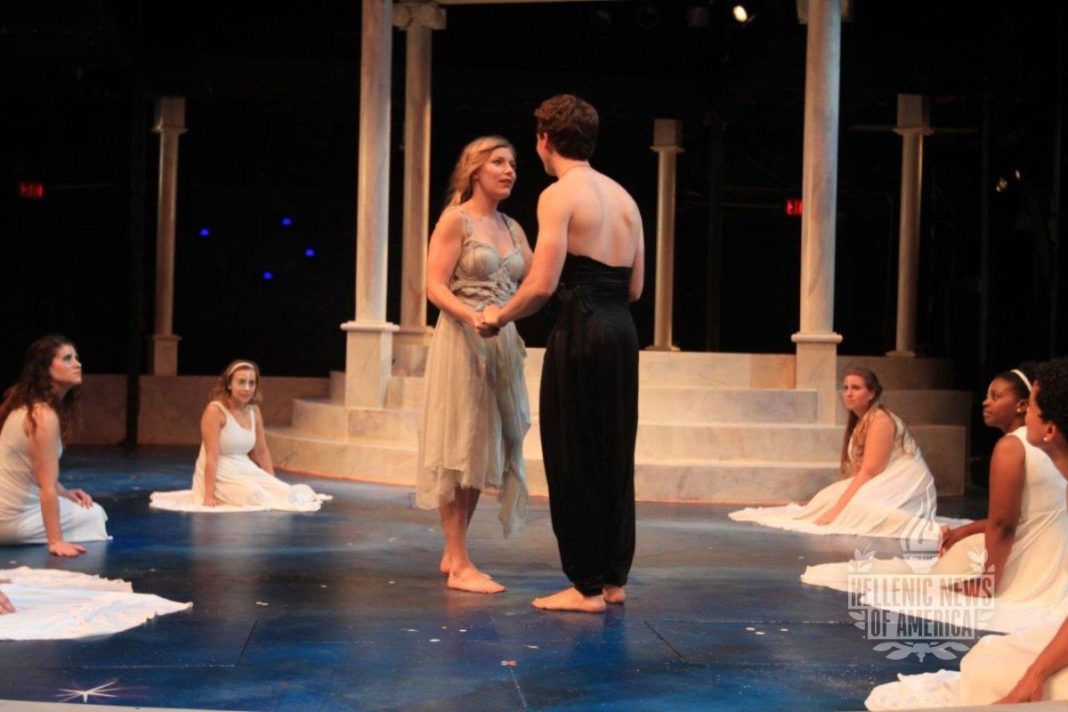 My dear friends and readers,

I’m sure most of you are back from summer travel or vacation and are getting ready for fall. Today I want to speak to you about our immortal classical theater.

I know that theater is something particularly special to us Greeks. We were the ones who created it, and gave it form. Because its roots are buried deep within our souls and minds, I believe we are the ones most naturally responsive to it. It’s for that reason that each time I hear of a production of Greek drama on one of our area stages, I hurry to see it. I’ve had the privilege of performing it myself, and I am always eager to see fresh faces and experience new interpretations.

This year, Villanova University has begun its theatrical season with Sophocles’ masterpiece, Electra, which is being presented at Vasey Hall on the University campus through October 2. Villanova is well known to our Greek community, containing a large number of Greeks among the students and faculty of its six colleges. The University itself takes special interest in preparing the ethical as well as intellectual leaders of the next generation, and it is committed to the classics in which the great moral problems we face are so strikingly expressed.

Electra, the heroine of the play that bears her name, is the eldest daughter of Clytemnestra and Agamemnon, the King of Mycenae and the victor of Troy. Clytemnestra has killed Agamemnon upon his return from Troy in revenge for having sacrificed the youngest of his three daughters, Iphigenia, to raise a favorable wind for his ships bound for the war with Troy. This leaves Electra and her middle sister, Chrysosthemis, who continue to live in the royal palace after Agamemnon’s slaying under the control of Clytemnestra and her lover, Aegisthus. Chrysosthemis lives resignedly under this yoke, but Electra is consumed by the need to avenge her father as both a personal and a religious duty. For this reason she is a prisoner within the palace walls, and treated like a beggar to whom scraps of food and clothing are flung. Electra’s only hope for vengeance is the return of her brother Orestes, exiled as a child and presumed to have been killed on Clytemnestra’s orders. Electra, however, continues to wait for him, unwilling to believe that the gods will leave so great a crime unpunished.

Electra is not alone; she is accompanied by a chorus of women, six in Villanova’s production, which as in Greek tragedy generally comment on the unfolding drama and advise the protagonist. They remain with her throughout her inner journey of anger, passion, and terror. The role of Electra is one of the most difficult and demanding in all of drama, and the theatergoer will recognize the similarities between Sophocles’ plot and that of Hamlet, which is also about a single protagonist who seeks revenge for the murder of a royal father. In Hamlet, the question is whether, when, and how Hamlet can strike down the assassin who has assumed his father’s and his own rightful place. Electra, in contrast, must await the return of a hero in whom necessity compels her to believe, but whose existence is uncertain. The dramatic climax of her role comes when she is falsely informed of his death as a means to relax the palace guard, but from despair she goes to joy when Orestes at last appears to execute justice.

Here, then, is an opportunity to see the first family of Greek drama, the House of Atreus, brought to the stage not in the more familiar guise of Aeschylus’ Oresteia, where Orestes dominates both the action and the argument of the play, but from the female perspective of Electra, who has stubbornly kept her father’s memory alive with the flame of her own life. Electra forgoes her personal chances—love, marriage, children, honor, happiness—to nurse the hope of revenge that will alone right the moral world of the play. As Father Cregan said in the interview I had with him after the show, “I was fascinated at having this ancient story told from a perspective that had never been heard before in literature, that of a woman, who is able to project her own values and articulate her story without the filter of male censorship. I wanted to show what power and agency looks like for a woman trapped within a patriarchal system, yet still faithful to herself. And, as with all of the great Greek plays, Electra wastes nothing. It is completely focused on what it wants to say.”

Our community should take advantage of this rarest of opportunities, to hear a woman’s voice ring clearly in the theater for the very first time.

My dear friends, I wish you the happiest of fall seasons.

Previous articleCrozer-Keystone Announces Annual Food Drive to Help Local Organizations That Could Use a Helping Hand
Next articleDr. Anthony Skiadas will MC the 29th Anniversary Dinner of the Hellenic News of America