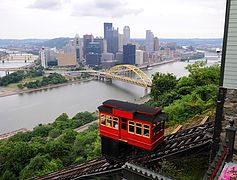 “New waves of transplants are arriving from

Philadelphia, New York, and beyond, lured

by a quality of life that consistently earns

Pittsburgh a perch in the upper reaches of

I was privileged to be among a group of ten members of the International Food, Wine, and Travel Writers Association (IFWTWA) to spend days touring the cultural and culinary offerings of Pittsburgh, PA. In 2014, The Economist ranked Pittsburgh as the most livable city in the continental United States, coming in just after the beautiful city of Honolulu.

Mr. Craig T. Davis, President and CEO of VisitPittsburgh has invited Greek American individuals and organizations to visit Pittsburgh. Special tours can be arranged by contacting his office. For group tours, information may be found on http://www.planpittsburgh.com/group-tour/ .    Individuals are invited to email [email protected] or go to this website:  www.visitpittsburgh.com .

The tour in which I participated began with a ride through our neighborhoods on Molly’s Trolleys and ended with a ride on the historic Duquesne Incline for a superb dinner at Monteray Bay Fish Grotto, with its spectacular views of The Three Rivers. In return for being hosted, the writers will submit their articles to publications in eight US cities and to periodicals in Canada and France.

The writers were welcomed by Davis, during a reception at The National Aviary. The following days were spent visiting The Andy Warhol Museum, The Mattress Factory, Phipps Conservatory, The Nationality Rooms at the University of Pittsburgh, and the Carnegie Museum of Natural History.

Culinary experiences included breakfast at Pamela’s Diner and Waffles and Incafinated, meals at the Conflict Kitchen and Smallman Gallery. A variety of Pittsburgh style food was sampled during the popular Burger Bits and Bites Tour of the Strip District. 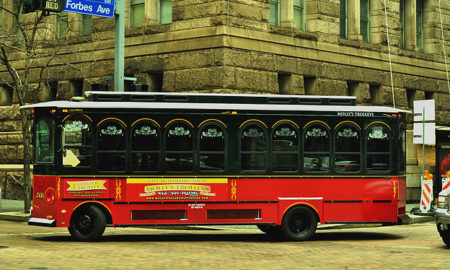