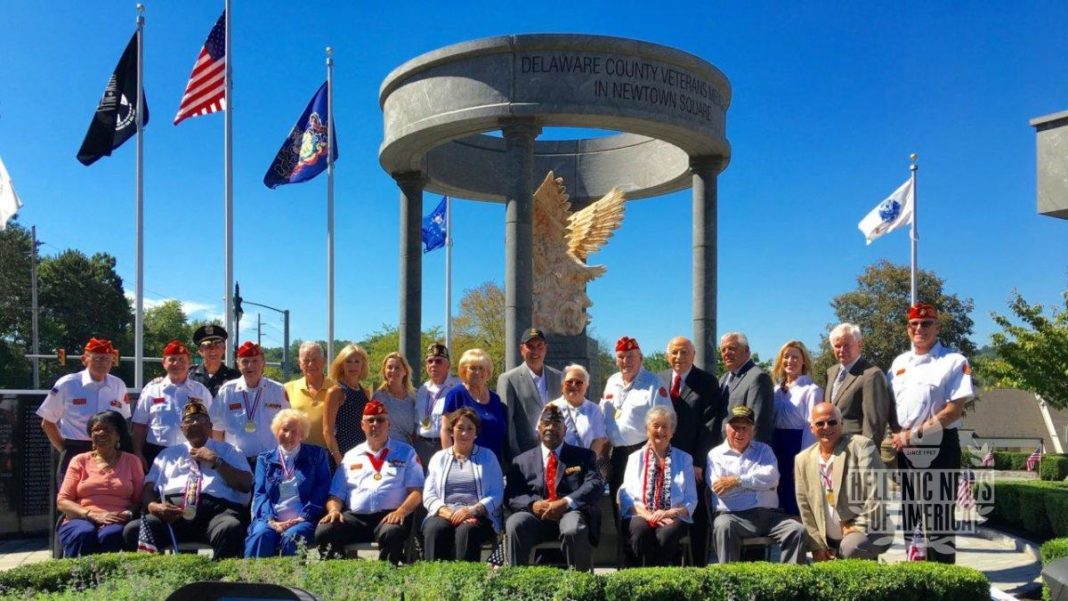 The mood seemed to be shining as brightly as the September sun Sept. 14, when the 2016 Freedom Medal Winners were announced by the Delaware County Veterans Memorial  Association (DCVMA) at the site of the Memorial on West Chester Pike in Newtown Square.  In a special morning ceremony, emceed by Guy Fizzano, U.S. Army Ret., president of the DCVMA Board, the honorees were called by name and  branch of service, and asked to stand for acknowledgement. The Third Annual Freedom Medal Winners will be officially honored at the Annual Freedom Medal Dinner, slated for 6 p.m. Thursday, Nov. 17, at Springfield Country Club.

Awards for Outstanding Contribution To Education will be presented to  Kathleen Breslin and Jeffrey LaMonica. Breslin is the Delaware County Community College (DCCC) Vice President for Institutional Advancement and exectutive director of the DCCC Educational Foundation.  LaMonica is an associate professor of history at DCCC.

The award for Outstanding Community Involvement will be presented to Wilbur and Betty Lea of the Henderson Foundation. The award will be accepted on their behalf by Bill Taylor.

The 2016 President’s Award will be presented to Linda Houldin, DCVMA founding member and longtime supporter of Veterans. Houldin is the executive director of the Delaware County Historical Society and has been instrumental in expanding the Memorial’s progress and visibility.

Fox 29 weather anchor Sue Serio will be the master of ceremonies at November’s Freedom Medal Dinner, which is sponsored by DCVMA and Delaware County Council.  Rock and Roll legend /U.S. Army Veteran Bobby Rydell will be a special guest. Rydell, who is a DCVMA Advisory Board member performed at the Rocking For The Troops concert last year to benefit the DCVMA Educational Program.

Honorees were nominated by a committee comprised of members  of  VFW Post 7390,  the Gen. Smedley Butler Detachment Unit 741, and American Legion Post 805.

“Every year we do a lot of research, and I think the 2016 honorees are outstanding, as people, as Veterans and in their service to our country,” Daly stated. “I hope everyone in our community will try to come out to honor our recipients and show them how grateful we are for their sacrifices and service.”

2016 Honoree Bob Spano remarked after the ceremony, “I am so surprised and so humbled to be honored with this award. In my opinion, these Freedom Medals should be group awards because every  veteran should be honored like this.  I will accept this honor on behalf of all the other Vietnam Veterans.”

Other speakers at Wednesday’s ceremony included board member Joe Daly, who is credited with originating the idea for the Delaware County Freedom Medal dinner;  Dennis Murphy, US Army Veteran, who spoke about  Casket Flag Raisings at the Memorial  at 6 pm on the second Saturday of each month;  and Linda Houldin, who spoke about the Memorial’s Educational Program, acknowledging a group of homeschooled students in attendance. The ceremony’s opening prayer was led by retired Army Col. Rev. Wylie Johnson, DCVMA chaplain.

“I really want to thank the Veterans committees and organizations who helped us choose the honorees for this year,” Houldin said. “I congratulate each and every one of them and we all look forward to this year’s  dinner  on November 17when they receive the recognition they deserve.  I also want to thank everyone who makes the  Freedom Medals and this beautiful  Memorial possible, including our Veterans,  Delaware County officials,  Claude deBotton and family, all the donors and the local community. I thank God for every one of them  and their support. Our Veterans should want for nothing. We need to thank them and honor them every single day.”

To purchase 2016 DCVMA Freedom Dinner tickets, to sponsor a veteran’s dinner ticket, for tribute book ads and sponsorship  or for more information, visit www.DelcoVeteransMemorial.org or call 610-400-8722. Tickets are $100 for non-veterans and $75 for veterans and veteran spouses and include cocktail hour, hors d-oeuvres, dinner and entertainment.