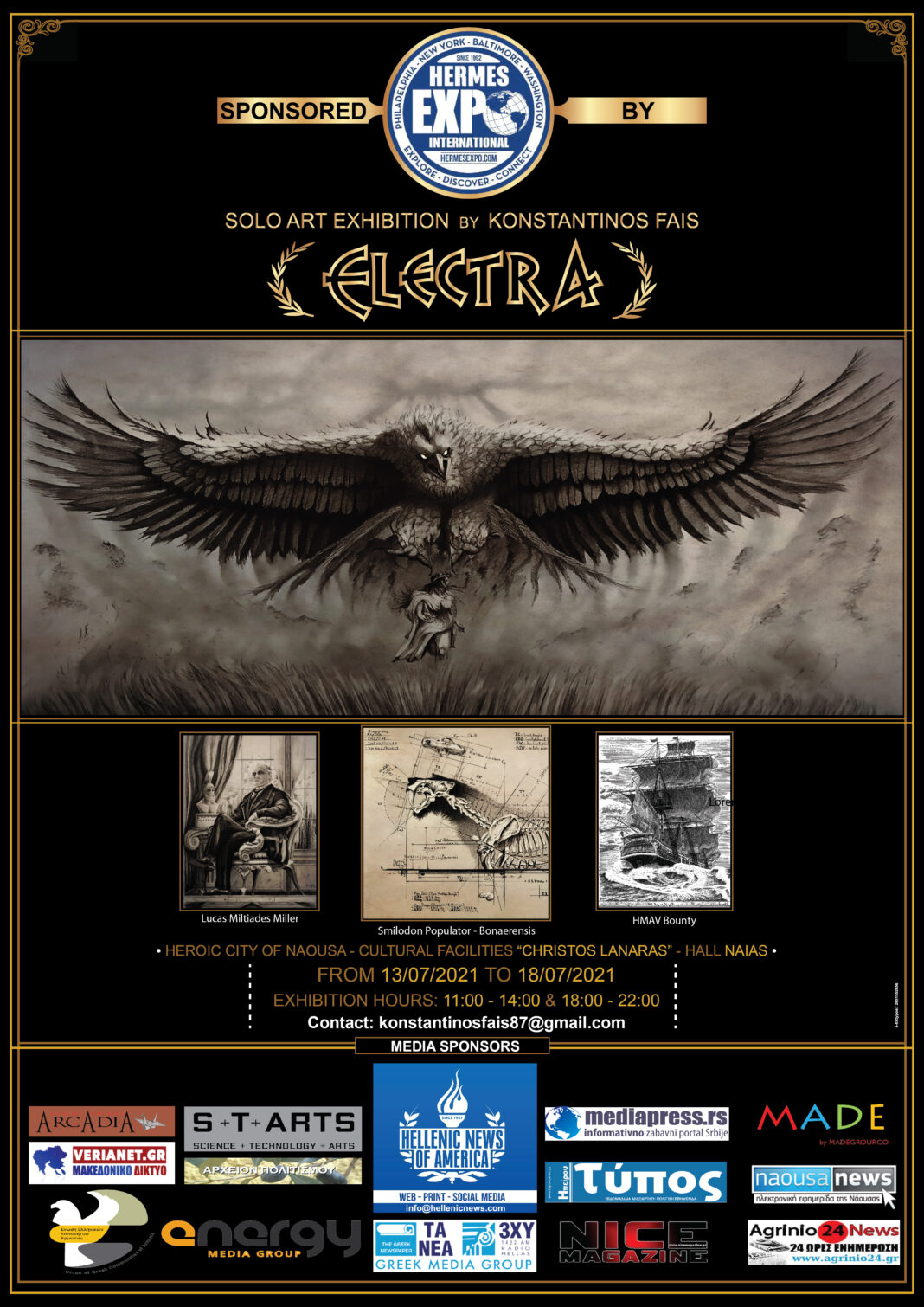 In the Heroic city of Naousa, Greece, in the “Naias” hall at “Christos Lanaras” Cultural Facilities from 13 to 18 July, the solo art exhibition”Electra” will be presented.  The artist is Konstantinos Fais, he comes from the city of Ioannina, in the region of Epirus.

The subject of the exhibition deals with Worldwide History. Visitors will have the opportunity to travel back in Time, with the total specific selection of works of art exceeding 40. All three collections are based on Prehistory, both Mythology and recorded History of Ancient Greece (TLG-TLL) and Worldwide Shipping. Special ink and pencil pieces, created with an extremely realistic approach, a result of thorough research and long-term artistic cultivation of their creator.

On the one hand gods, heroes, mythical creatures, epic scenes, leading figures and predators of the Ancient World and on the other hand, Maritime Giants of the last 250 years that left their mark on the modern World, ships that featured in blockbuster movies, famous shipwrecks, battleships of the 1st and 2nd World War etc.

The event’s flagship will be the Giant Smilodon of Uruguay. A clay-modeled skeleton of a prehistoric, massive feline with a total length of 3 meters, based on the discovery of the largest skull of the Smilodon Populator-Bonaerensis species, that dates back to 1989 in the Latin country. The discovery came to international awareness by the New York Times in March 2020 and brought the scientific community to a standstill.

This giant will be accompanied by another sculptural piece, the Amphimachairodus Giganteus by Roth Wagner (1854), based on the homonymous fossil of Pikermi, in the region of Attica in Greece, a geological site today described as “Akropolis of Paleontology” by the foreign researchers. The event’s purpose is to offer the visitor a unique experience through Science and Art, a passage from allegory and Myth, to the wonders of Nature and Industry. In honor of the 200th anniversary of the start of the Greek Revolution, the event is dedicated to the memory of one of the most famous orphans of that period, the legendary attorney and US Congressman Lucas Miltiades Miller, who, among other achievements during his glorious professional and political career in the USA, was the founder of three cities with Greek names, Arcadia, Athens, and Marathon.

“Electra” is sponsored by Hermes Expo International from New Jersey, the exhibition hours are 11:00-14:00 and 18:00-22:00, while Media sponsors are business and cultural factors from the Greek Communities of USA, Australia, and Armenia, members of the Art world from Serbia and Italy, as well as domestic Greek printed and online media.