A FABULIST TOURS NORTHERN GREECE AND SPEAKS IN ATHENS 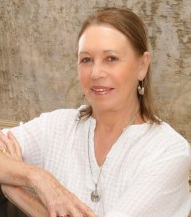 Aurelia Smeltz, writer for The Hellenic News of America, is currently touring Northern Greece visiting outstanding hotels, spas, and restaurants. In addition, she will give two talks in Athens. On September 25 she addresses The American Women of Greece at the Athinas Hoteln and the next evening she will give a talk to artists and writers at Polis Arts Cafe,

Aurelia describes herself as a “Fabulist” and has this to say about her writing:

As a writer I am a fabulist—a person who loves and relates fables. I suppose this is why I travel as a wayfarer to what some call “the unwritten places of Greece.” These remote locales hold so many mysteries.

I have stayed alone on a Cycladic island that is a burial ground for ancient warriors, I lived in a shepherd’s hut on a mountain village of Crete, I wandered through forests and drank from a stream of limpid water in “a place lost in time” high up in the Peloponnesus, and I saw the fabled Bird of Paradise in Megara. I was on a sailing trip when the small craft was lashed by eight foot high waves while a mermaid wailed “Where is Alexander?” The storm did not subside until the captain shouted “Alexander the Great lives and is King!!”

In a mountain village high on a plateau on Crete, I have tasted “Maria’s Bread,” kneaded by the wings of an angel, I have drunk the fire water called tsikouda during an “Evening Harvest” at a vineyard built against all odds on a rugged, unforgiving mountain, I have sailed through paradise, wandered through the heart and soul of Greece, lived where the white mountains meet the Lybian sea, swam in sweet water, frolicked with the Cycladic sisters—two goddesses and one temptress, ate ambrosia in the Garden of the Gods, walked near the Stairway to Heaven, spent a magical evening observing people of Tsintzina engaged in the art of doing nothing, spied on an amorous couple in an ancient love nest in Marathonisi, near Gytho, walked in the footsteps of Lord Byron, and visited the island where people forget to die.

I am a fabulist. Welcome to my world.