GreeceCulture A million dollar gift for Franklin Institute, from a onetime 'bad...
Culture

A million dollar gift for Franklin Institute, from a onetime ‘bad kid’ 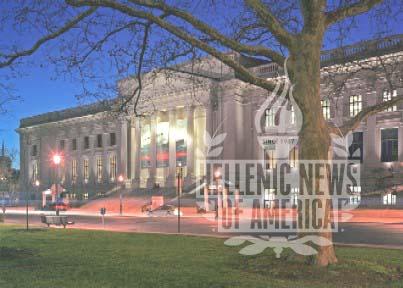 Donors to arts groups tend to be compelled to give after making frequent visits and forging deep connections, but Nicholas Karabots hadn’t been to the Franklin Institute in decades when, several months ago, he accepted an invitation to stop in.

“I sat there and saw what they were doing with all these kids,” said Karabots, 78, who made his fortune in printing supplies, puzzle books, and developing real estate. “I went up to the observatory and there were four inner-city kids who were spending a year learning astronomy. I was impressed.”

Karabots felt a deep connection; he himself was once an inner-city kid – “a bad kid,” said the former South Bronx gang member – which informs his philanthropic decisions to this day. Relatively quickly, he and his wife, Athena, decided to give the Franklin Institute.

It is the largest gift in the institute’s history, according to leaders.

Their commitment, to be officially unveiled Monday, has sufficiently girded the Franklin’s confidence to put a shovel in the ground this spring for a long-dreamed-of building addition. The pledge puts the museum and educational institution within about $6 million of a $64.7 million campaign goal for the addition, new exhibits, refurbishing of old ones, and other upgrades.

The 53,000-square-foot Nicholas and Athena Karabots Pavilion will house not only a id=”mce_marker”0 million multiroom exhibit on the brain and neuroscience, but also a conference center, much-needed classroom space, and additional room for the kinds of traveling exhibitions that have become critical to the Franklin Institute’s attendance and revenue goals. Board chair Marsha R. Perelman says financial projections show the addition will help bolster the budget.

Construction of the $23.3 million building, designed by Philadelphia’s SaylorGregg Architects, is expected to begin in the spring. Its opening two years later will mark the Franklin Institute’s first burst of new building ambition since its Futures Center was opened more than two decades ago.

The addition, on the south side, will fill out a gap where a building was always meant to go if money could be raised. But it won’t be anything like the institute’s imposing neoclassical façade, whose east steps have welcomed aspiring Niels Bohrs and George Washington Carvers since that edifice opened in 1934.

Because 10,000 square feet of the new building is exhibition space (adjacent to the current traveling gallery) that must be windowless, the challenge was to avoid an open expanse of nothingness on the outside, facing Race Street.

And so architects turned to artist Ned Kahn to design a “shimmer wall” of moving metal shingles that will reflect, change, and undulate as the wind rakes across its surface and the sun moves across the sky.

“This is the best combination of science and art you could have, because you can see the wind,” says Perelman.

The addition will fill out the property to meet the line of the rest of the original building, unlike the Futures Center, which sits back. “I think it leaves an open book for others to follow and still attach,” said architect Peter Saylor, hinting at the possibility of future additions.

The Karabotses are fond of the design of the building. In their Fort Washington offices last week, Athena Karabots pointed approvingly to an architectural rendering showing a colorfully checkered outpost of Children’s Hospital of Philadelphia at 48th and Market Streets that the couple have funded with a $7.5 million gift. Construction on that project is to begin Thursday.

But it wasn’t the architecture of the Franklin Institute addition that captured their imaginations. “Never forget where you came from,” said Nicholas Karabots last week. “You’re doomed if you do.”

Recent gifts are a manifestation of that philosophy. They like to give to children’s causes, and especially ones that extend a hand to disadvantaged youth.

“I was from a poor immigrant family,” said Nicholas Karabots, whose shepherd father came to the United States from Greece as a teen, first working as a bookie and waiter and, eventually, a union leader. “When I was 9 years old I built myself a little shoeshine box and went down to Union Square. When I came home, my mother would say, ‘How much?’ I would say $2, and she would take id=”mce_marker”.90 of it.

“Now, we baby our kids. And yet I empathize with the kids in the inner city. These kids don’t know what’s available to them.”

The Karabotses have long been generous, but it’s only in the last seven or eight years that their giving has increased in size and frequency, he said. Before that, he was involved in business, she in family. “Your children are settled, and then you have time to do these things,” she said.

In recent years, “these things” have included the gift to Children’s Hospital; a donation to the College of Physicians for the Karabots Junior Fellows Program, which supports the development of high school students into health-science professionals; a gift to help the Philadelphia Museum of Art acquire an important set of early Renaissance armor; and $7 million to keep Thomas Eakins’ The Gross Clinic in Philadelphia by forestalling its purchase for an Arkansas museum.

All grew out of emotional connections – the gift to help disadvantaged youth in need of medical care or mentoring and career guidance, the armor because the museum’s collection of scabbards and rapiers is a huge draw to children.

But what about the gift for Philadelphia to retain the Eakins masterpiece?

Here, too, emotion played a role. Karabots says he was deeply fond of the late Philadelphia Museum of Art director Anne d’Harnoncourt, and when she asked him for his support, he agreed to give id=”mce_marker” million. But after learning of Leonore Annenberg’s id=”mce_marker”0 million gift to the campaign, he increased his pledge. Walter Annenberg had been a loyal customer of Karabots’ when he sold printing supplies – he did business with Annenberg’s TV Guide for more than two decades.

“If it hadn’t been for the Annenbergs, who knows what would have happened to us,” he said. “The Annenbergs – I owed them. I felt an obligation.”

Philanthropy is like that. For Karabots, business and philanthropy are closely tied, especially now that his companies are passing into the hands of two of his daughters and the husband of the third. He says he continues to evolve his business operations – he is cultivating vineyards on patches of his verdant 240-acre Fort Washington estate and has started a winery that produces 40,000 bottles a year – and expects his heirs to be of similar philanthropic stripe.

In broad strokes, he says, it works something like this:

“I get it from here, and I try to give it over there.”