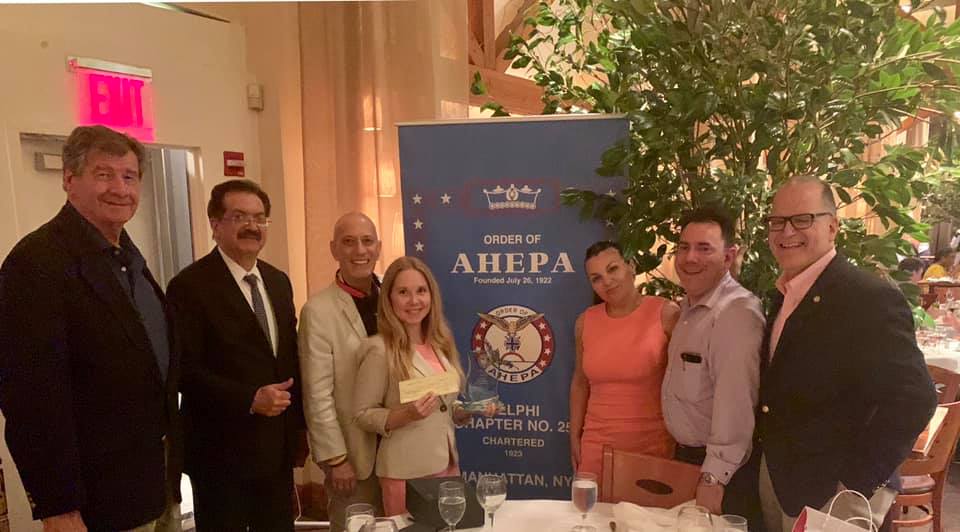 The Manhattan Chapter of The Order of AHEPA, Delphi # 25, on August 19, 2019, honored a member of the Manhattan based AHEPA family – Evryklea Chapter #36 of the Daughters of Penelope – Michele Mitrovich, by issuing a $ 1,000 scholarship grant for her extraordinary academic work, efforts in promoting Hellenism, and work ethic after the recent completion of her graduate archaeological project in Hellas. Michele has selflessly volunteered her time through the past years for the Delphi Chapter, as the Recording Secretary and a core team member that reactivated the Evryklea Chapter #36 in Manhattan. Michele is currently enrolled in the Ph.D. Program in Aegean Scripts and Prehistory (PASP) at the University of Texas at Austin. The Manhattan Chapter of The Order of AHEPA, Delphi #25, is proud of Michele accomplishments and look forward to her future endeavors and successes. ΑΞΙΑ!!!

The American Hellenic Educational Progressive Association (‘AHEPA”) is the largest and oldest American-based, Hellenic heritage grassroots membership organization. AHEPA’s Delphi Chapter #25 was founded in 1923 in Manhattan NYC; it was the first Chapter in New York State and one of the first in the Northeast. The Delphi Chapter # 25 was instrumental in welcoming the early Greek immigrants to the USA as they disembarked at Ellis Island and helping them with their assimilation into the American culture by assisting them with learning the English language, finding employment and eventually becoming citizens of the United States.

The Delphi Chapter # 25 has had many notable and prominent members in its history, including many philhellenes who embraced AHEPA’s ideals and values. In 1924 Seraphim G. Canoutas joined Delphi Chapter # 25 he was at the time the most notable historian and the primary source for the 1880 to 1920 wave of Greek immigrants. Some of the many notable members that followed in Delphi’s rich history were Past Chapter Presidents and later Past Supreme Presidents of AHEPA Dean Alfange and Dr. Kimon Doukas. On March 11, 1931, the then New York State Governor (and later to become President of the United States) Franklin D. Roosevelt became a member of the Order of AHEPA and joined the Delphi Chapter # 25 in New York City and remained a member till his death. In 1954 then U.S. Senator Irving M. Ives of New York also became an AHEPAn with his membership in Chapter # 25 followed in 1955 by New York State Supreme Court Justice Joseph A. Cox; other notable past Presidents of Delphi Chapter # 25 included the late Honorable Federal Judge Nicholas Tsoucalas.

Currently, the AHEPA Delphi Chapter # 25 is one of the most vibrant Chapters of The Order of AHEPA; following a dynamic revitalization this AHEPA Chapter, based in Manhattan, has George Eliopoulosgrown to be the largest Chapter in the entire global AHEPA domain. The Delphi Chapter # 25 was recently awarded the 2019 Chapter of the Year Award at the AHEPA Supreme Convention in Chicago. It vibrantly continues on today in the tradition of AHEPA’s ideals and values of promoting Education and Hellenism through its many efforts of public service and philanthropy.

Dendias: Greece will continue to raise Turkey’s behaviour with EU partners and at international forums