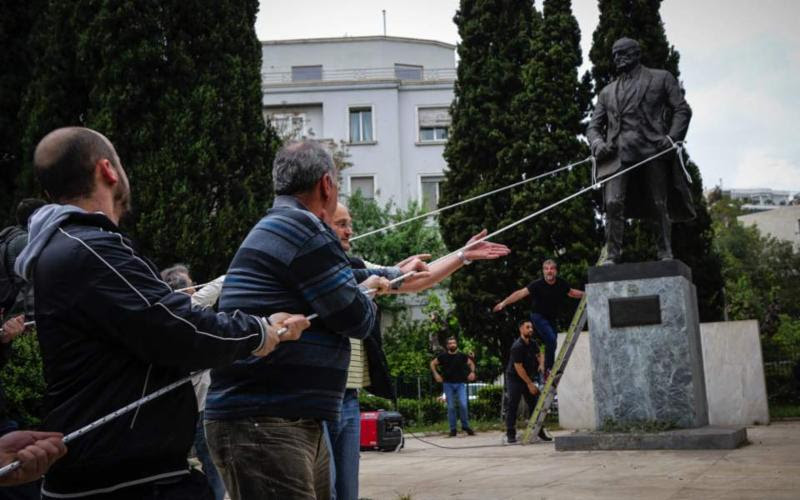 WASHINGTON, DC — The American Hellenic Educational Progressive Association (Order of AHEPA), the leading membership-based service association for the nation’s millions of American citizens of Greek heritage and Philhellenes, strongly denounces the attempted vandalism of the Harry S. Truman Memorial Statue in Athens by left-wing extremists, announced Supreme President Carl R. Hollister.
“AHEPA respects and encourages freedom of speech and the rights of individuals to gather and demonstrate peacefully,” Hollister said. “However, there are certainly more productive and effective ways to express dissent or opposition than to resort to senseless acts of vandalism.”
He added, “We commend the Hellenic Police Unit for the Reinstatement of Order for its effort to prevent the vandalism of the Truman Statue. We will work with the mayor of Athens and the municipality to explore measures to protect the Truman Statue, which has quite often been the target of vandals.”
Background
AHEPA gifted the Truman Statue on behalf of Greek Americans when it was dedicated on May 29, 1963, before an audience of 20,000.
In his message that was read to the crowd, President John F. Kennedy stated: “I hope this outstanding memorial, which the Order of AHEPA has made possible, will come to symbolize not only our common heritage and efforts, but will serve to remind us of the high priority President Truman gave the progress of Greece toward economic development and social justice in peace and freedom.”
Former Greek Prime Minister Constantine Karamanlis stated the importance of the Truman Doctrine at the statue’s unveiling ceremony: “If the Greeks want to survive as a free nation, they should not forget the dramatic period with which Mr. Truman’s name is linked. Should they forget it, they would deserve their fate and have no right to ask for anyone’s help.”
President Harry S. Truman was a member of AHEPA, joining on March 25, 1946, at ceremonies held at the White House. He was a member of AHEPA Chapter 73, Kansas City, Mo.
# # #
Founded in 1922 in Atlanta, Georgia, on the principles that undergirded its fight for civil rights and against discrimination, bigotry, and hatred felt at the hands of the Ku Klux Klan, AHEPA is the largest and oldest grassroots association of American citizens of Greek heritage and Philhellenes with more than 400 chapters across the United States, Canada, and Europe.
AHEPA’s mission is to promote the ancient Greek ideals of Education, Philanthropy, Civic Responsibility, and Family and Individual Excellence through community service and volunteerism.
For more information, please visit www.ahepa.org.
Share
Facebook
Twitter
Pinterest
WhatsApp
Linkedin
Email
Viber