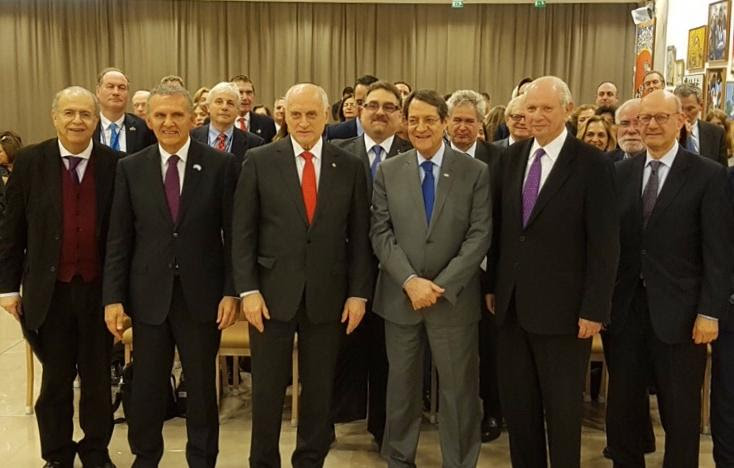 Karacostas said.  “We were pleased to welcome and join our colleagues for their important visit to Cyprus.”

He added, “We are proud to provide continued diaspora support and encouragement for advancing the trilateral relationship between Cyprus, Israel, and Greece, which lends stability to the eastern Mediterranean region.  We are especially grateful to President Anastasiades, and all of the Cypriot government officials with whom we met, for the time they afforded us that helped to make this one-day mission a success.”
In January 2016, AHEPA, the American Hellenic Institute, B’nai B’rith International, and the Conference of Presidents of Major American Jewish Organizations completed their second Leadership Mission to Israel, Cyprus and Greece.  The groundbreaking inaugural mission was held in January 2014.
# # #
Founded in 1922 in Atlanta, Georgia, on the principles that undergirded its fight for civil rights and against discrimination, bigotry, and hatred felt at the hands of the Ku Klux Klan, AHEPA is the largest and oldest grassroots association of American citizens of Greek heritage and Philhellenes with more than 400 chapters across the United States, Canada, and Europe.
AHEPA’s mission is to promote the ancient Greek ideals of Education, Philanthropy, Civic Responsibility, and Family and Individual Excellence through community service and volunteerism.
For more information, please visit www.ahepa.org.
Share
Facebook
Twitter
Pinterest
WhatsApp
Linkedin
Email
Viber