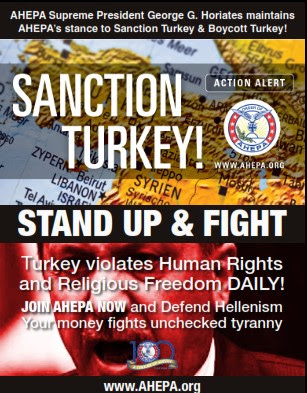 In a September memo to organizational leaders, Supreme President George G. Horiates provided instruction for Ahepans to mobilize against Turkey’s provocations.
Turkey has escalated tensions in the Eastern Mediterranean to dangerous levels not seen since 1996 through violations of international norms and international and U.S. law, Horiates writes in the memo.
“Turkey’s actions are not only illegal, but they are not in the best interests of the United States and place lives unnecessarily in harm’s way,” Horiates states.
The memo recaps actions taken by AHEPA to address Turkey’s provocations and how Ahepans, and by extension, the community, can help going forward.
“We stand ready to assist you with this most important mobilization to address this pressing matter that threatens NATO ally, Greece; strategic partner, Cyprus; and U.S. interests in the region, overall,” Horiates concludes.
Share
Facebook
Twitter
Pinterest
WhatsApp
Linkedin
Email
Viber