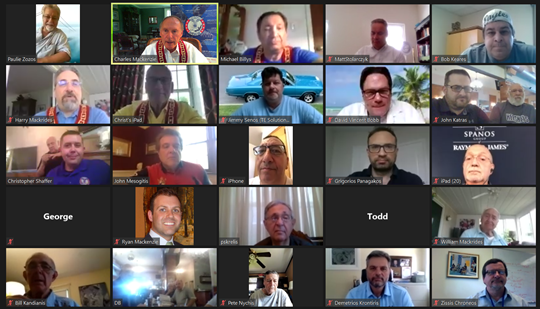 AHEPA Power District #4 of Pennsylvania held a zoom conference on Saturday, June 12th, 2020 from 9 am to 1 pm, which was attended by 35 delegates online for a very successful business meeting. It was welcomed and commended as a viable communications system for conducting business and a highly successful event.

Congratulations to the newly elected officers for ‘2020-2021 AHEPA District #4:

Chapter of the year: Chapter #64 Harrisburg

Chapter with most increase in membership: Chapter #445 Upper Darby (+16)

Chapter with most reinstatements: Chapter #400 (+6)

PSG John Mesogitis was elected as convention chairman and we thank him for leading this convention through our business exchanges that proved to be highly worthwhile for the undertaking of great decision-making. Much was accomplished and discussed for our future endeavors. Supreme Governor George Papaspyrou also greeted the delegation and thanked District #4 Lodge and Delegation for their efforts during this past year to provide charity and philanthropy throughout our communities. The 35 delegates who participated were enchanted by the remarks given by Supreme President George Horiates who gave a full welcome message for our delegates accompanied by congrats to District #4 for a full year of many successes.

SP Horiates gave an inspiring message of goodwill, challenging our delegation for leadership to plow through the obstacles facing us at the present time to achieve our goals for the future. He touched upon the present danger to Hellenism and our ‘patrida’ (homeland of Greece) from Turkey.  Also, mentioning the hardship that the pandemic has presented at the present time, he lamented the cancellation of this year’s national convention but encouraged us to ‘keep up the good fight’ to accomplish our goals. We thank brother SP George and wish him all of God’s blessings as he leads us once again this year as much as he did this past year in all his challenges. godspeed!

All our significant business listed on the agenda was achieved and the newly elected officers were sworn in by Past Supreme President Carl Hollister. Also attending was our esteemed Executive Secretary Basil Mossaidis of our own District #4 who also congratulated Past District Governor Charles Mackenzie and his officers for leading a successful and vibrant year for District #4 full of many successes including the ‘mass initiation’ achieved by Chapter #64 Harrisburg, our 3rd consecutive service dog for warriors campaign spearheaded by Dr. Billys, and the many achievements accomplished by the 20 chapters of Power District #4.