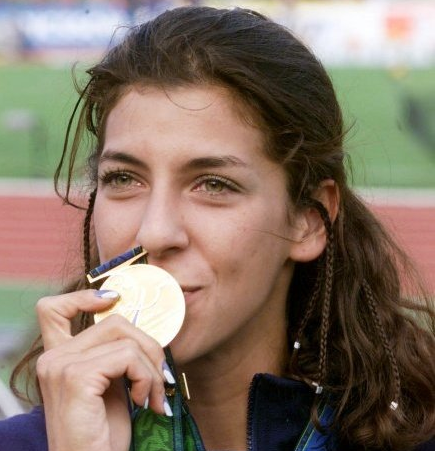 When asked how she has been in Greece during the quarantine, she shared that in Greece they were quite lucky, since they prepared for COVID-19 early on. “We were able to adapt faster,” she said. “Initially, I thought that the circumstances would have been more difficult, but we listened to our leaders and we stayed home. The hardest part wasn’t the quarantine, it was the economic impact on the country of Greece, where people were unemployed for a couple of months yet they still needed to make ends meet to pay their bills. The Greek public showed great discipline.”

“Personally, I liked the triple jump since it was a more technical sport,” she said. “It was more challenging than the long jump, and I excelled in it in the Greek national championship. It was a new sport and new records emerged. I was drawn to the triple jump because it had more rhythm.”

She credits every major triple jump competition that she participated in to be a great learning experience in her career. She is a firm believer that adversity and the difficult times made her stronger in her athletic journey.

Throughout her remarkable career in track and field, Vasdeki won the gold medal in the women’s triple jump (14.55 meters) at the 1998 European Championships in Budapest, where she made history becoming the second female Greek athlete to be named “European Champion” after Anna Verouli won the women’s javelin throw event in the 1982 European Championships. “Every track and field athlete has high goals: to run as fast as possible, to throw as far as possible, and to jump as far as possible,” she said. “When you are competing in the race, you don’t only want to win a medal. As an athlete, I wanted to do something more for myself and for Greece, my country.”

Following her European Championship win in August of 1998, a few weeks later, in September, she won the World Cup in Johannesburg, with a jump of 14.64 meters. “That was a great feeling because it involved different countries coming together and we all became a team representing Europe. We became a team indeed and we all bounded. It was an incredible atmosphere,” she said.

“Winning the World Cup competition in Johannesburg is a moment that will always be engraved in my memory. Not only was it a personal joy for me, but for the country and the entire continent of Europe as well, since my win was able to secure points for Europe,” she added.

In 1999, she claimed the bronze medal for Greece in the women’s triple jump at the World Athletics Championships in Seville, Spain, behind fellow Greek triple jumper Paraskevi Tsiamita (first place) and Yamile Aldama (second place).

“Being a world-class athlete has some great moments, as well as some difficult and challenging moments,” she explained. “The hard and challenging times are essential for one to grow and get better in the sport.”

For young and aspiring track and field athletes, especially those that would like to do the triple jump, she remarked, “Whatever sport or task you do, you need to love it. The more you love it and the more you want it, then they will be able to achieve something. If they give their best effort, that’s a big plus. That’s a big success for the person. Set goals, love what you are doing, and work towards their goals to become better as a human being. You need to enjoy and love what you are doing.”

Vasdeki had the greatest remarks about fellow Greek athlete and Olympian, Niki Bakogianni, who still holds the Greek national record in the women’s high jump (2.03 meters) to this day. “I’ve known Niki Bakogianni for a very long time. Back when we were both competing, we would be together each day for training. We would go on to dorm together as roommates in many competitions starting with the 1996 Olympic Games in Atlanta. We both did really well in the Atlanta Olympics. Niki was already an accomplished athlete when I had met her, so I had a great deal of respect for her and for all the other Greek athletes that came before me. I was honored to be roommates with Niki,” she said.

On her definition of the word success, she said, “Success can be something very simple such as finding a person that will make you happy and make you a better person. Having a life with health. Success has a variety of factors. Setting goals for yourself and achieving them, or coming really close. Whatever you strive to do, do it correctly since every person is unique, and we can’t all be first place winners.”

Vasdeki expressed her sincere gratitude to her fans, all over the world. “Greeks from all over the world support us, and they love us. In every race and competition, Greek fans would also be near us and supporting us. They were our strength and our pillar of courage. They would always give us tremendous energy when we would see them on the bleachers rooting for us. Even in foreign territories, the Greek fans made us feel at home. Their love and support were always palpable. We thank them very much for their wonderful support,” she concluded.

Previous article
“Full and Understanding Support”: A Response to “The Wrong Side of History”
Next article
AHEPA Power District #4 of Pennsylvania elects news officers