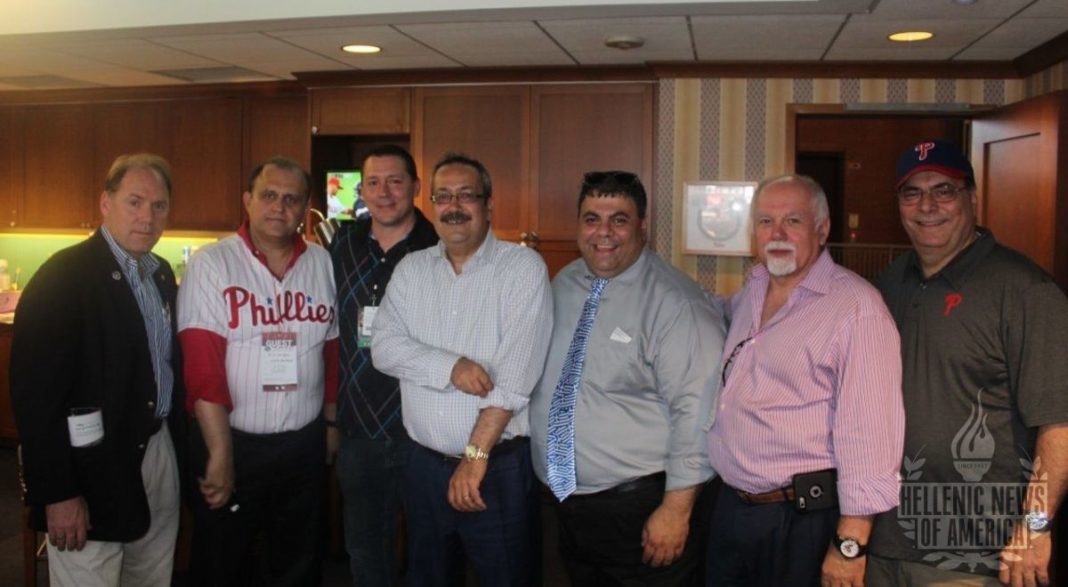 “On behalf of AHI, I sincerely thank the Philadelphia Phillies, especially the unbelievable unwavering efforts of the Phillies’ Director of Publicity, John Brazer, and Director of Group Sales, Vanessea Mapson, without whose support the event could not have been a success,” AHI President Nick Larigakis said. “I am also deeply grateful to the Greek American communities of the Tri-State Philadelphia area who came out in droves to support Greek Heritage Night and proudly displayed their Hellenic pride.  Finally, the event could not have been a success without the incredible backing of certain individuals and entities that helped to promote it and to sell tickets.”

He added, “We continue to receive positive feedback about the event, and we will continue to work to see it grow every year.”

At the baseball game, cancer-survivor Gabriella Pethokoukis, of Chicago, threw out the ceremonial First Pitch.  Pethokoukis played collegiate women’s volleyball at Villanova University. In April 2014, she was diagnosed with Burkitt’s lymphoma, a fast-growing form of non-Hodgkin’s lymphoma.  Today, she is cancer-free.  At the 112th Annual Philadelphia Sportswriters’ Association Dinner, Pethokoukis received the 2016 Most Courageous Athlete Award, the association’s most prestigious award.

“She is the comeback player of the year and a courageous athlete,” Larigakis said.

The popular Phillies mascot, The Phillie Phanatic, sported an Evzone costume. The Phanatic and The Olympians, a Greek dance troupe under the direction of Betty Tsarouchis, from Saint Luke’s Greek Orthodox Church, Broomall, Pa., performed Greek dances upon the Phillies’ dugout during the 7th Inning Stretch. The Olympians also preformed pre-game at the main entrance gate. Also, Olympians’ performer Kathryn Corbino had the honor of a solo performance, singing “Take Me Out to the Ballgame” at the end of the 5th Inning

A promotional video about Greece, made possible by the Press Office of the Embassy of Greece, was played on the ballpark’s Jumbo-tron. Greek Heritage Night also featured a Greek cuisine stand.

AHI is grateful to the many individuals and entities that helped to make this event in a success.

Special acknowledgment and thanks goes to CosmosPhilly and Hellenic News of America for media coverage.