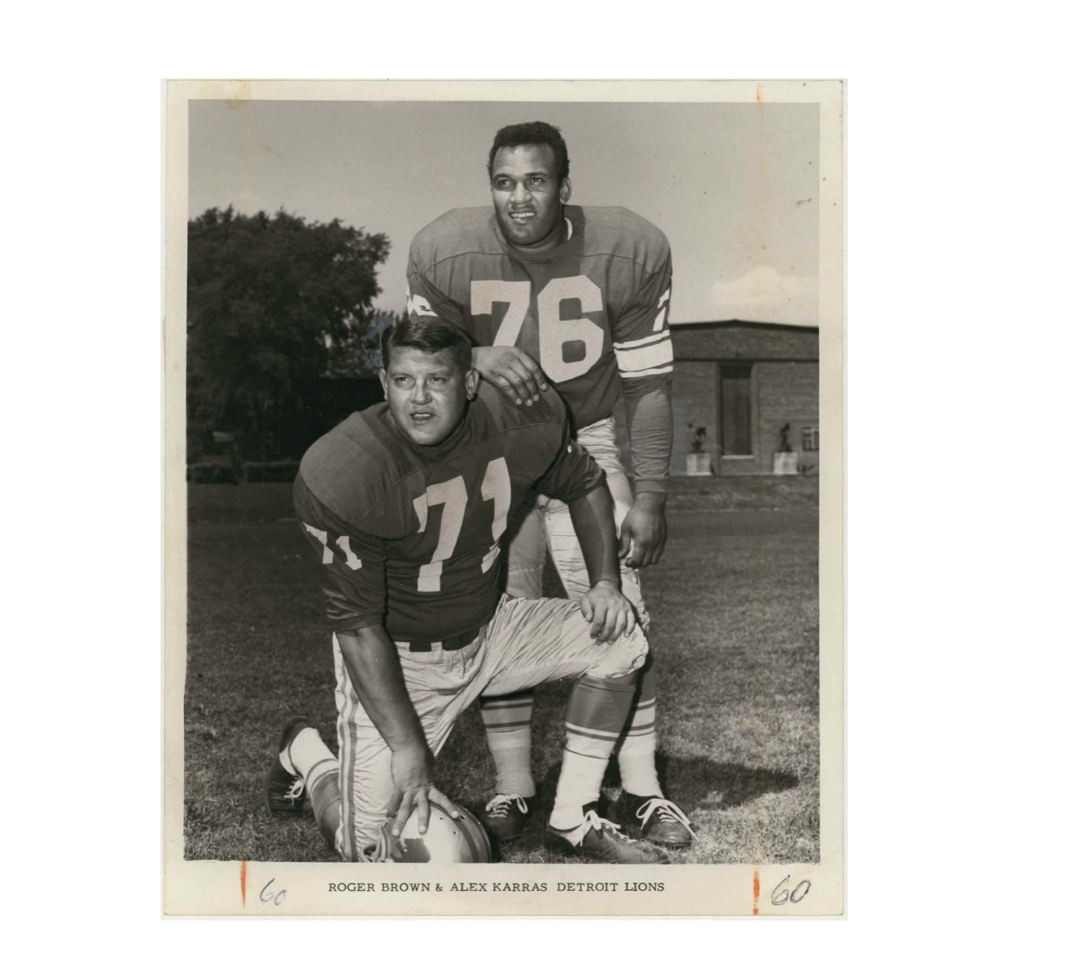 By Raymond Rolak (Former President of the DSBA)

This special added class into the Pro Football Hall of Fame was expanded to celebrate the National Football League Centennial.  Karras was known as the dominant defensive tackle of his time who utilized a variety of innovative moves and stunts to elude his blocking opponents.

Karras played for Detroit from 1958-70 and was named first-team All-Pro three times, earned four Pro Bowl berths and was a member of the NFL’s 1960s All-Decade Team.  He was selected by the Lions in the first round (10th overall) of the 1958 NFL Draft out of the University of Iowa.

Mrs. Martha Firestone Ford, the Lions owner and chairman said, “We would like to congratulate the entire Karras family on the selection of Alex into the Pro Football Hall of Fame.

While we were thrilled to induct Alex into our most recent Pride of the Lions Class in 2018, today’s announcement solidifies his place as not only one of the all-time great Lions players, but also one of the best to ever play in the NFL.  We also would like to congratulate all of Alex’s fellow Centennial Slate Hall of Fame inductees.”

He also was a member of what many consider to be the NFL’s original “Fearsome Foursome” – Karras, Roger Brown, Darris McCord and Sam Williams.  These four defensive linemen dominated the NFL in the early 1960’s.

In 2018, along with Herman Moore and Roger Brown, the Lions inducted Karras into the ‘Pride of the Lions’, the highest honor bestowed upon former Detroit Lions players.

He was previously snubbed by the Pro Football Hall of Fame because of his NFL suspension in 1963.  Karras’s partial ownership in Detroit’s Lindell A.C. Bar became a source of controversy.  League officials urged him to sell his financial interests in the place because of reports of gambling and organized crime influence.  After first threatening to retire rather than give the bar up, Karras admitted placing bets on NFL games and was suspended by the league, along with Green Bay Packers’ running back Paul Hornung.  The suspensions were harsh.  Both received banishment for one season.  During his exile, Karras had a celebrated pro wrestling match, taking on the memorable character, Dick-the-Bruiser, in front of a standing-room-only event at the Olympia Stadium in Detroit.

Karras’ story telling skills and unique sense of humor came to the attention of writer George Plimpton.   Plimpton had heard many funny Karras stories while training with the Lions for his book Paper Lion.  When the book was made into a full featured movie in 1968, Karras made his film debut, playing himself.  The film premiered in Detroit on October 2, 1968 and starred Alan Alda.  That was the start of a new career for Karras.

A very memorable role came shortly after.  In the western parody and comedy, Blazing Saddles (1974), Karras played Mongo, a very strong and slow-witted thug.  Mongo rode into town on a huge Brahman Bull and knocked out a horse with one punch.  His famous line came next.  He responded to a question from the Sheriff with, “Don’t know …… Mongo only pawn in game of life.”  The scene made pop-culture history.

Alex Karras was born on July 15, 1935 in Gary, Indiana.  Besides football, he excelled as an actor, sports broadcaster, author and producer.  Other hit credits also included Porky’s (1981) and Victor Victoria (1982).  In the 1980s, Karras had huge success with the TV sitcom Webster, playing George Papadapolis.  It was the story of an inter-racial adoptive father and son.  It was a role that showcased his softer side.

Karras had a contentious relationship with his college coach, Forest Evashevski.  On Evy’s 90th birthday, Karras called his old coach and apologized for being such a ‘Malakas‘ (Greek for jerk), at Iowa.  Karras was very proud of his Greek heritage.

Karras was selected to the College Football Hall of Fame in 1991.

He was married to the actress Susan Clark.  His first wife was Ivalyn Joan Jurgensen.  He had six children.  He died on October 10, 2012 of chronic kidney failure in Los Angeles, California.