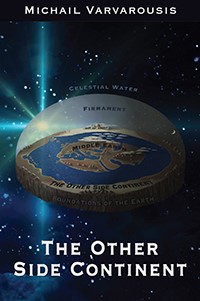 This new book presents the shocking results of a 20-year study on the seamanship of the ancient world.
Outskirts Press Announces the Release of The Other Side Continent by Michail Varvarousis
https://www.mvarvarousis.com/wp-content/uploads/2017/02/theothesidecontnent-199×300.jpg

The book includes 133 photographs, drawings and watercolor paintings that help illustrate the results of a 20-plus-year study of ancient explorative voyages. Presented in a simple, understandable format, The Other Side Continent details sea voyages on the world’s great oceans, including all those components that give light to an ancient effort to explore the Atlantic Ocean and probably even the American continent.

Particular emphasis is given to the ancient case of crossing the Atlantic, which seems to have preoccupied some of the first maritime Mediterranean cultures. The matter has provoked mixed reactions in the past due to the phenomenon of pseudoarcheology and human tendencies to rewrite history for ethnic, religious and political purposes.

The book gives the lay reader an opportunity to understand some unknown aspects of human history that have affected the evolution of human civilization up to modern times.

Varvarousis spent more than 20 years researching historical and technical details about the seamanship of the ancient and medieval world, including shipping, and he studied, designed and constructed astronomical and nautical instruments and mechanisms (astrolabes, quarters, and nocturnals) to be evaluated in the open sea.

His extensive research included studying ancient Greek literature and medieval documents and conducting personal interviews with leading scientists. He also traveled to the Southern Antilles, Great Britain, Scandinavia, historical cities of renaissance Italy, the Canary Islands, Egypt, and many areas in his native metropolitan Greece and the monastic community of Mount Athos.

The Other Side Continent gives the reader a rare opportunity to explore the most arcane aspects of this mystery: the possible crossing of the Atlantic in ancient times. A Greek language version, Η Απέναντι Ήπειρος, is also forthcoming.

About the Author: Michail Varvarousis was born in 1974 in Thessaloniki of Greece, where he studied medicine and specialized in anesthesiology. In 2004, he published a two-book collection, Mystikon Fylakas Agelos, and he is a member of the Writer’s Union of Northern Greece. Along with his interest in researching ancient and medieval maritime history, Michail also participates in offshore sailing races as the captain of the sailing vessel Agia Irini GRE1390. About Outskirts Press, Inc.: Outskirts Press offers full-service, custom self-publishing and book marketing services for authors seeking a cost-effective, fast, and flexible way to publish and distribute their books worldwide while retaining all their rights and full creative control. Available for authors globally at www.outskirtspress.com and located on the outskirts of Denver, Colorado, Outskirts Press, Inc. represents the future of book publishing, today. # # # Outskirts Press, Inc., 10940 S. Parker Rd – 515, Parker, Colorado 80134 http://outskirtspress.com 1-888-OP-BOOKS

About Outskirts Press, Inc.: Outskirts Press offers full-service, custom self-publishing and book marketing services for authors seeking a cost-effective, fast, and flexible way to publish and distribute their books worldwide while retaining all their rights and full creative control. Available for authors globally at www.outskirtspress.com and located on the outskirts of Denver, Colorado, Outskirts Press, Inc. represents the future of book publishing, today.