On March 3, the American Hellenic Institute honored the best and brightest of the Greek American and Philhellenic community.

This was the 43rd anniversary for The Hellenic Heritage Achievement & National Public Service Awards Dinner held in Washington, D.C.

The dinner honors Greek Americans, philanthropists and philhellenes based on career achievements and contributions to the Greek American community or community at large.

“Tonight we honor four outstanding members of the Greek American community for setting an example not only of professional excellence but of selfless service to others, which is the ultimate definition of the ideas of Hellenism,” said Hellenic Institute President Nick Larigakis. 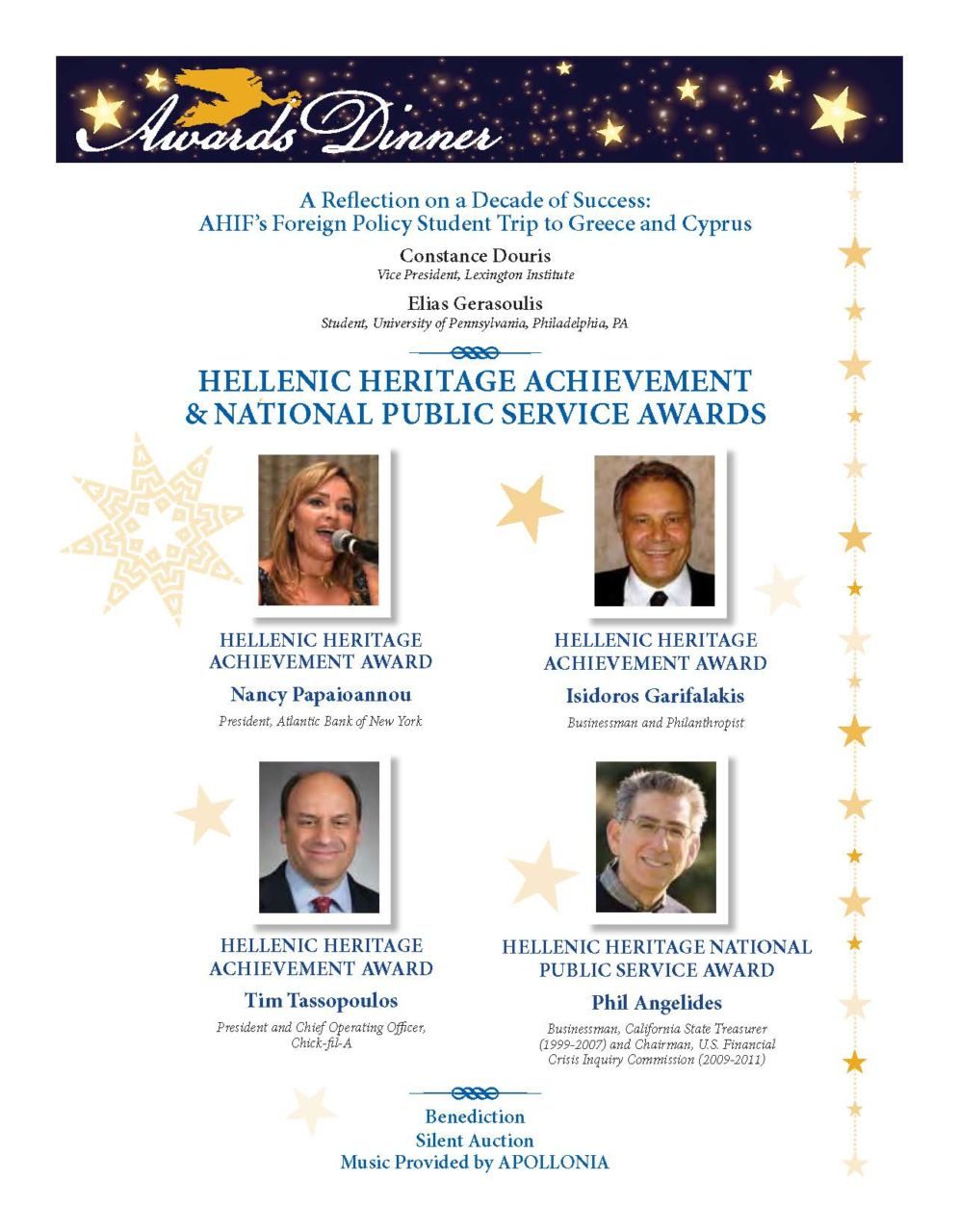 It was an impressive roster.  Honorees included a former California state treasurer, a philanthropist doing good works in his Greek hometown, a bank president who provides financial support to New York Greek Americans, and the president and chief operating officer of Chick-Fil-A.

Phil Angelides earned a public service award for his “record of achievement in public policy and reform.”  Angelides is president and owner of Riverview Capital Investments, which focuses on developing clean energy products and sustainable urban communities.  He served as California state treasurer from 1999 to 2007, the first and only Greek American elected to a state-wide office. Under his watch, the state saw many innovative projects and policy initiatives that created affordable housing, clean energy and jobs.  From 2009 to 2011, Angelides served as chairman of the U.S Financial Crisis Inquiry Commission studying the factors that led to the 2008 Recession.

President Larigakis described Angelides as a “faithful public servant” and the “conscience of a nation when it examined such important topics as housing affordability and the causes of the Great Recession.”

Angelides was also the Democratic nominee for California governor in 2006 and chairman of the California Democratic Party in the early 1990s. The 64-year-old was born and raised in Sacramento, California. His mother, Eleni Papadopoulos, from Alexandria, Egypt came to the United States in 1949, marrying his father, Jerry, a San Franciscan.

Isidoros Garifalakis is the founder and CEO of Omega Industries, Inc. in Vancouver, Washington, the nation’s largest railroad crossing supplier and a world-wide leader in street fabrication, railroad track products and dredging equipment.  He earned an achievement award “for his passionate commitment to integrity and honesty in business, philanthropic achievements and his support of Orthodoxy.”

“The first designation of an American dream can still be a reality as personified by another honoree, Isidoros Garifalakis, President Larigakis said. “He started with nothing, built everything and has never forgotten where he came from as he continues to support his hometown of Palioxori.”

Born in 1947, Garifalakis immigrated to the United States after marrying at age 23 and within five years had learned English and earned his U.S. citizenship.

Active in his church, he is a member of the National Hellenic Society and sponsor of the Hellenic American Cultural Center in Portland.   Garifalakis has been honored with the PLATO award and received the Humanitarian Award at the Annual Greek Folk Dance Festival. He serves on the Advisory Board and Council to the Greek Orthodox Metropolis of San Francisco and on the Archdiocese National Council.

Nancy Papaioannou was elected president of Atlantic Bank of New York in July 2013. She earned an achievement award “for her commitment to the Hellenic ideals of entrepreneurship and service.” President Larigakis described Papaioannou as a “smart, intelligent woman, who rose to the top of a male-dominated field with nothing but hard work, grit and an authentic expression of her Hellenic values.”

Her bank is a key financial partner for the Greek American and Cypriot American communities in New York and also works to assist Greece with its financial difficulties. A native of Greece, she is chairman of the board of the Hellenic American Chamber of Commerce, on the Board of Directors of the  National Hellenic Society, a member of the board at Mt. Sinai Queens Hospital and a member of the Archdiocesan Cathedral Philopinchos Society. She was named Distinguished Person of the Year at the Hellenic News of America’s 2017 30th anniversary gala and Greek American Woman of the Year at the 2016 Association of Greek American Professional Women Annual Awards Gala. This year, she will serve as chairwoman of the 2018 Greek Independence Day parade in New York.

Tim Tassopoulos began as a restaurant team member at Chick-Fil-A 40 years ago and in 2016 was named its president and chief operating officer. He earned an achievement award “for his visionary leadership in business and fidelity to Orthodoxy and youth.”

“While Greek Americans are used to success in the restaurant business, Tim Tassopoulos has redefined what it means to be successful as he shepherds one of the largest and most innovative restaurant powerhouses in the world,” President Larigakis said.

Tassopoulos embarked on a career at Chick-Fil-A because the cultural ethos of the restaurant chain closely resembled his own Hellenic heritage. He was a business consultant to Chick-Fil-A in the early 1980s and was instrumental in evolving the business from a mall operation to free-standing restaurants.

A native of Atlanta, Georgia, his grandparents were born in Greece and came to the United States in the 1900s. Tassopoulos currently serves as chairman of the board of trustees at Oglethorpe University in Atlanta, where he graduated in 1981.  He continues to be passionate about youth and education and is a board member of Hellenic College and Holy Cross Greek Orthodox School of Theology. He also sits on the advisory board for the Atlanta Area Council for the Boy Scouts of America and is an active board member of the Boys and Girls Club of Metro Atlanta and the national board of Orthodox Christian Fellowship.

“Tonight we honor four distinguished Greek Americans whose achievements not only inspire us but remind us that being Greek American is also about being part of something bigger than yourself,” President Larigakis said. “As we honor these four deserved individuals tonight, we honor not only their achievements, but their contributions to the rich tapestry of Hellenic heritage.”

Previous articleEllinopoula.com Gives the Flexibility of Online Learning
Next articleTimoleon Kokkinos: Educating the Mind and Heart