Vassilis Tourikis is on a mission to include Greek’s ancient heritage on its flag. The graphic designer who now works as a real estate broker came up with the idea many years ago to include the 16-pointed Star of Vergina on Greece’s blue and white flag. The logo represents Macedonian royalty and the Hellenistic empire of Alexander the Great.

Tourikis, who holds a political science degree in International Law studies and Intellectual Ancient History from the University of Washington in Seattle, had been designing graphics for universities and thought he’d do something for his own countryman. The proposed design showed up on T-shirts that Tourikis brought to the Hermes Expo more than a decade ago and were well received, he said. He’d like to present his concept again at the 2018 Hellenic Expo to continue gaining public support on a grass roots approach for his mission.   Recently, “pseudo-Macedonians” put the Macedonian Star of Alexander the Great on their flags, generating protests in Greece, Tourikis said.

“This Macedonian issue’s been getting on my nerves so I thought I’d contribute something,” he said. His ultimate goal is to have his flag proposal presented to the Greek nation for a vote. He’s talked to some prominent Greeks about it but nothing officially has been introduced yet, he said.

“It’s a fact that the modern Greek nation flag is blue and white, and there are reasons for that, but we’ve forgotten our Pre-Christian heritage! There’s no symbol on it so I selected that one,” he said.  There’s plenty of archeological evidence that the Star is a legitimate symbol for the Greek people, he adds.

“Macedonia was rooted in the culture and it’s significant that it has not been implemented on the current flag.  It’s been incomplete,” he says.

The Star of Vergina has only been seen in museums, as a tourist promotion, or as a symbolic art form.  “I think the Greek people ought to review if they are seriously concerned about the fact that the Macedonians have raised the flag with the logo and all they do is protest,” Tourikis says. “If Alexander the Great was back he would say, ‘this is really strange. I’m from Greece, yet the neighbors up north and beyond are making incorrect claims of my identity as a legitimate Hellene!”

Tourikis’ campaign is partly a patriotic tribute to his father, who died 21 years ago. George Tourikis fought victoriously “almost barefooted” against the Italians on the Albanian front in World War II.

“I would like to thank my father George H. Tourikis for his inspiration to enlighten my Hellenic character to rise to the call of duty. Tourikis also thanked Hermes Expo founder and organizer Paul Kotrotsios for giving him a forum to share his proposal with his fellow Hellenes and to “display my patriotic duty.”

Tourikis has written an article explaining Greece’s connection to the logo and his reasons for adding it to the Greek flag. 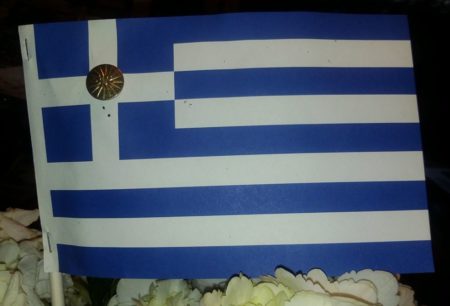 The symbolism of any national flag reflects a unique aspect of its cultural history. Regrettably, the flag of the Hellenic Republic (except for the cross, a product of the late Hellenistic, Byzantine period) lacks any symbol or logo from its myriad ancient heritage. There is not even a reminder of its remarkable classical period or the Glorious Alexander the Great, the advancer of the Hellenistic Age. Perhaps it has been an oversight by omitting any ancient symbols on the current flag of the Hellenic Republic.

“Signifying the sixteen pointed golden star of Vergina on the white cross of the flying blue/white stripes would give an appropriate added dimension to the Greek flag. The golden sixteen pointed star would enhance symbolically the vast manifestation of the legacy—namely the Macedonian Hellenistic Empire of Alexander the Great. Consequently, the two color flag    would accurately represent that distant epoch, thereby tying the past to the future.

“The issue is not to elaborate on Alexander’s conquests but to comprehend the fundamental influence of the Hellenic culture and its profound consequence toward the history of the Eastern Mediterranean. The Hellenic language was the official or rather the administrative language in the Eastern Roman Empire that cultivated the birth of Christianity. The instrumental feature –Hellenic Paideia—nurtured the development of Christianity. With it, Christianity could not have materialized.

“As Orthodox Christians are preparing to celebrate the resurrection of Jesus Christ on Easter Sunday who was sacrificed at thirty three years of age, let’s not forget that Alexander died also at the age of thirty three. It was common, when Hellenes greeted one another in the Levant that they would ask the whereabouts of Alexander the Great. The reply would be, “He lives and reigns.”