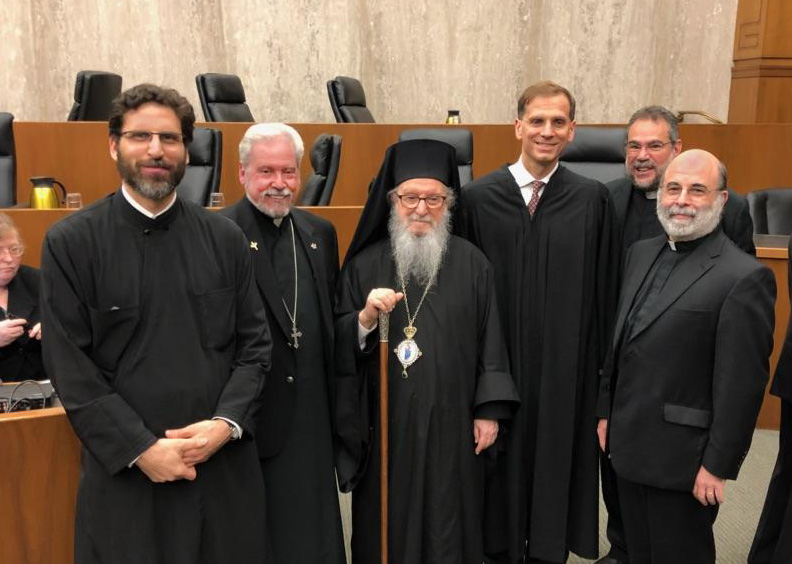 WASHINGTON – His Eminence Archbishop Demetrios of America offered the invocation of the Investiture of the Honorable Gregory G. Katsas as Circuit Judge of the U. S. Court of Appeals for the District of Columbia Circuit, Friday, April 27.

The Investiture took place in the ceremonial courtroom of the United States Courthouse, with over 150 people in attendance, including Supreme Court Justices, White House staff, members of Congress, clergy, past and present colleagues, family and friends. Judge Katsas is only the 62nd judge to hold this prestigious office.

In the presence of the Chief Justice of the United States Supreme Court, John G. Roberts, Jr. and the sitting judges of the United States Court of Appeals for the DC Circuit, the oaths of investiture were administered by Associate Justices of the Supreme Court Clarence Thomas, for whom Judge Katsas clerked during his first term on the high court, and Neil Gorsuch, with whom he worked closely at the Department of Justice.

Married with two daughters, a graduate of Princeton University and Harvard Law School, Judge Katsas is a devout steward of St. Katherine Greek Orthodox Church of Falls Church, Virginia, and is as distinguished by his humility as he is by his brilliance.