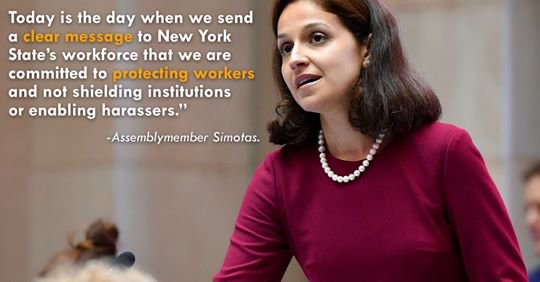 Meet Aravella Simotas, the NYS Assemblywoman representing Astoria and Northwest Queens. She is an inspiration and role model to all women and young girls of Hellenic decent since ascending to her public service role in 2011. She sat to talk with us about her background and what motivates her to be a change maker. Her experiences, insights and advice are a window into what motivates her to devote her life to fighting for us.

Aphrodite Kotrotsios (AK): Where were you born and raised?

Aravella Simotas (AS): I was born in a town called Que Que, in Rhodesia, in what is now known as Zimbabwe. My parents immigrated from Greece to the United States and settled in Astoria, which has been my home since I was sixth months old.

AK: What is your educational background?

AK: Where are your roots in Greece?

AS: My parents are both from the beautiful island of Kefalonia. My father, Aristidis, is from the southern region, Asprogeraka/Poros, and my mother, Eleni, from the northern region, Lavonikes/Vasilikades. My husband, John Katsanos, has family roots in Karpenisi. My husband and I were married on Kefalonia in 2004, and we baptized our daughter, Eleni Evangelia, on the same island in 2013.

AK: You have been in public service since 2011, what was your inspiration to get involved?

AS: I came from an immigrant family without much means, and I was very focused on achievement at a young age.  So I graduated from college at 20, law school by 23, and eventually got a high powered job that paid well.  But then realized I wasn’t working for things I really believed in, and that my work lacked a larger purpose. I also witnessed that the culture of my workplace was not supportive of or sustainable for women, who were actually treated pretty poorly.

I started looking at other options and I happened to speak to then-Assembly Member Michael Gianaris, who was actually my neighbor, and he said he was going to take a run for Senate, and I should consider running for the Assembly seat.

At first, I wasn’t sure it was a fit for me.  I’m a person who likes to work more than I like to take credit. I didn’t think I was a politician.  But I realized that there were so few women in important roles in Albany.  There were so many ways we could improve how New York treated vulnerable and deserving people, that just weren’t happening.  So I decided to run.

AK: What matters do you tend to focus on most and why?

AS: I am naturally drawn to focus on issues that improve the lives of women and children.  This year, I authored and was successful in passing landmark legislation that strengthens protections for New Yorkers who experience sexual harassment or discrimination in the workplace. I was also successful in extending the time to prosecute civil and criminal cases of second and third degree rape, and incest, to give survivors more time to process their trauma.  My successful push to require that law enforcement actually test all rape kits and that sexual assault victims are notified of their rights, including not having to pay for their rape kit, was particularly satisfying. This year, I was also able to fight against the powerful insurance companies so that many New Yorkers experiencing infertility can have access to IVF, which has long been considered the gold standard of care for this heartbreaking affliction.  I am also proud that pregnant women can now obtain insurance at any time during their pregnancy because of my effort to have New York be the first state in the nation to create an exception to the Affordable Care Act.  Generally, I focus my legislative work on creating positive, progressive change for my community and New York state at large.

AK: Did you have any additional legislative wins this year that you are proud of?

AS: This session, I was also proud to lead reforms that established equal pay protection for public employees, and assist small business owners with understanding and complying with new regulatory requirements.  As a kid, I used to help my parents run their delicatessen and remember how hard it was to keep up with changing regulations after long, exhausting days and weeks.  As a member for the Assembly, I try do to the heavy lifting for our small businesses, because I never will forget the challenges my parents faced.

AK: What is your greatest accomplishment?

AS: This one is easy.  My greatest accomplishment, and gift, is my daughter, Eleni Evangelia. She is seven now, and I gave birth to her during my second year in office.  She inspires me every day to work as hard as I can to improve my community and New York State so that it can provide better opportunities for her and all children her age, then I had.  Eleni is the person who inspired me to fight so hard to improve New York’s sexual harassment and discrimination protections—I was laser focused on changing the unacceptable culture of many workplaces that permit these type of vile behaviors to exist and fester so that by the time Eleni enters the workforce, she will not have to deal with behavior that I have encountered.

AK: How is public service evolving?

AS: I am excited by the degree to which communities in New York State are re-energized and fired up to get more and more involved in national, state and local politics. I am seeing so many of my neighbors passionately engage in public debate, organize open forums and lead movements of all shapes and sizes. In 2019, we are all learning that you do not necessarily need to be in elected office in order to be a public servant. All of us can have a voice at the table and, indeed, it is all of our responsibilities to advocate for change and improve our communities.

AK: What new direction have you taken in order to reach your constituents, especially the youth?

AS: It is energizing to see so much engagement in my district, especially among young voters. To reach the youth in Northwest Queens, I visit my local schools regularly to talk to the students about the importance of civic engagement, and their responsibility to give back. I also provide many students with opportunities to intern at the office so they can make a direct impact on issues they are passionate about.  Right now, I am speaking to students about the upcoming Census, and the importance of making sure that every resident in our community is counted.  The Census will have a direct impact on their lives, since the results will affect how much money their school receives, whether they or their neighbors will have access to adequate social services, and even whether we are able to get adequate federal funding to fix our subways.

I also love to knock on my constituents’ doors and to call them just to introduce myself and hear what issues they believe I should focus on. There are so many laws I’ve written that were a direct result of a conversation I had with a constituent.  I remember meeting a widow who lived in rent stabilized housing but who could not qualify for assistance with rent increases because her deceased husband had been the only name on their lease.  Not only did I make sure New York City granted her that benefit, I also wrote the law that mandates that leases be transferred to the name of a surviving spouse or child with disabilities after the death of the lessee.

I cannot fulfill my oath if I do not have regular contact with my constituents. Public service is a calling that requires me to serve my neighbors.

AK: How has your Hellenic heritage guided you to get to where you are today?

AS: Growing up, I witnessed my parents’ strong work ethic and unique form of resilience that I can only assume is a result of their journey from Greece to Zimbabwe, back to Greece, and then to the United States. My roots keep me grounded and are a guiding force in moments of uncertainty. I hope to pass on those same values to my daughter.

AK: What do you think about the future of Hellenism in America?

AS: The future of Hellenism remains very bright. Our community continues to produce a growing number of elected officials, influential professionals, groundbreaking artists, business leaders, and educators who will carry on the Hellenic traditions and ideals that the United States respects. These include innovation, philanthropy, and above all, community service. I have no doubt that Hellenes around the United States will continue to succeed and maintain an important part in America’s story.

AK: How are you involved with your Greek American community?

AS: First, as a parishioner of St. Catherine’s and mom of a St. Demetrios student, I am incredibly close to the Greek American community in Astoria and greater New York. I regularly attend functions hosted by different organizations all across the country that are linked together by our common faith and heritage. I have attended or marched in every Greek Independence Day parade since I was in the third grade, and as a member of the Assembly, have proudly authored the resolutions honoring the 25th of March every year since I was first sworn into office. I was particularly proud to lead the charge to get my colleagues in government to recognize the significance of the Ecumenical Patriarch and need for greater religious tolerance.

AK: What are your plans for next session and what would you do differently?

AS: In 2020, I will build upon the workplace protections I was able to cement in law this year, and pass a package of bills to protect patients against sexual abuse by health care providers and expand transparency in the medical field.

I will work to make sure that my bill providing youthful offenders the opportunity to expunge their criminal records, which often act as barriers for people to move on with their lives, passes the upper house. I will continue my ardent push to redefine rape in New York to make sure that it adequately encompasses all of the heinous crimes that we all consider to be rape. This is an issue I have been fighting for since 2012, that has passed the Assembly every year since 2013, and that I have secured a new Senate sponsor for in 2020. Finally, I will fight hard to achieve a robust campaign finance system that does not consolidate power, but rather allows for more voices to be heard.

AK: What advice do you have for young aspiring professionals?

AS: I still remember the sage advice that was given to me on my first day in law school—they are known as the 4 Hs. (1) You cannot achieve any professional milestone without Hard work.  (2) Integrity means everything in professional life, so always remain Honest with yourself and with others. (3) Since none of us got to where we are by ourselves, always remember to Help others and pay it forward. (4) Finally, all of us need to maintain Harmony in our lives to fulfill our potential.