At Loi, the Compass Points to Greece 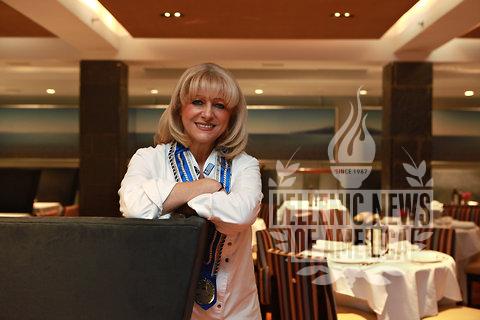 When Maria Loi, a vivacious, entrepreneurial Greek chef, restaurateur, cookbook writer and teacher, came to New York this summer, she talked a great deal about how her restaurant, Loi, which is opening tonight, would show the city how Greek food should be prepared.

She has softened her tone since then and now credits a number of established Greek restaurants with good food, but still says that hers is different, more varied and based on her family’s traditions.

“Nothing is fried, I do not use butter and add olive oil at the end so it’s healthier,” she said. “I cook most of my food slowly, in the oven.”

What had been Compass now has pleasant Aegean photographic murals on one wall, and an embroidered white curtain enclosing a private dining room. The menu is long, and lists many familiar dishes like phyllo pies, grilled octopus, fish baked in salt and braised lamb shank. Wild salmon is also offered because Ms. Loi insists that at one time, centuries ago, there were salmon in Greek waters. Her moussaka and pastitsio are distinctive, light enough to float off the plate.