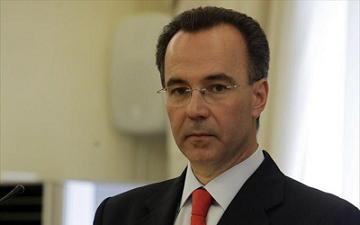 From early 2013 through May 2016, Konstantinos Koutras served as the spokesperson of the Hellenic Ministry of Foreign Affairs, heading the Ministry’s Information and Public Diplomacy Department. These duties were initially entrusted to him by the then Foreign Minister and current EU Home Affairs Commissioner, Dimitris Avramopoulos.

Earlier in his career, Mr. Koutras served a four-year tour (2003-2007) at the Greek Embassy in Ankara, Turkey, headed the Justice and Home Affairs Department of the Greece’s Permanent Representation to the European Union from September 2007 to the summer of 2011, and, from June through December 2012, was the Diplomatic Counsellor to the Minister at the newly established Ministry for Shipping, Maritime Affairs and the Aegean.

Mr. Koutras and his wife Popita have a son, Dionysios.

As of May 2016, he is the Consul General of Greece in New York City.

Previous articleNew Democracy’s Law Proposal for the Postal Vote of Greeks Abroad: A Chance (Under Certain Conditions) for a True Policy Concerning the Greek Diaspora
Next articleEurogroup statement on Greece