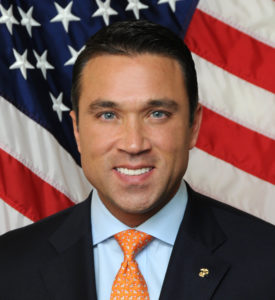 Greek Americans continue to worry about Turkish aggression over the Aegean Sea and they want a former U.S. Congressman to do something about it.

Republican Michael Grimm, who represented the 11th and 13th Districts in Staten Island and Brooklyn from 2011 to 2015, is running for his 11th District seat again in 2018. During a campaign fundraiser May 8, 2018 at the home of Dr. and Mrs. George Drogaris, Hellenic News of America Publisher Paul Kotrotsios asked the former Congressman about the escalation of Turkish aggression in the Aegean.

The former FBI agent, businessman, attorney, and U.S. Marine who served in the Persian Gulf War pointed to President Trump as a solution.

“We have a strong president that is not going to tolerate this type of aggression,” Grimm said. “I really believe this, President Trump will take a stronger position against Turkey then President Obama did and I do believe that we are going to be able to push back against this aggression before it gets any worse because they are getting very aggressive.”

Turkish jets have been violating Greek airspace for decades, and the incursions have increased over the years, according to an April 14 article in Business Insider. On April 12, 2018, a Greek fighter jet crashed in the Aegean Sea near the island of Skyros killing the pilot who was reportedly returning from a mission to intercept two Turkish Air Force jets.  Turkish officials said there were no Turkish forces in the area.

Fueling the incursions are territorial disputes centered on the hundreds of islands in the Aegean Sea. There is debate between the two countries over the extent of the area that those islands’ airspace and territorial waters cover.

Grimm, who is of German, Irish, and Sicilian descent, considers himself an honorary Greek and said he has served as chairman of the Greek caucus in Congress.  “All of my Greek friends tell me that because my mother is Sicilian, that means I’m Greek, so I feel like I’m an honorary Greek,” he joked.

Grimm added, “I’m hearing from recipients that they’re concerned they (the Turks) are going to take over all of Cyprus.”

Cyprus has been divided into a Turkish north and a Greek south since 1974. The internationally recognized government is on the Greek Cypriot side.  Turkey recognizes the breakaway north and keeps thousands of troops there.  Grimm related an experience he had while visiting Cyprus when they traveled through a Turkish occupied area. At one point, the driver stopped in front of a small house and started crying. When asked if he was OK, the driver apologized and said it was the house he grew up in. “During the war, we were thrown out by the Turks,” the driver told him.  They could not take any personal items with them, not even photos.  “It really struck a chord with me,” Grimm said. “I went to all the churches. They were destroyed, defaced, the icons destroyed. In certain instances they put mosques where the churches used to be.”

Grimm, who was raised Catholic, said it was a very personal moment for him as a Christian to see what went on there.

Kotrotsios acknowledged the good deeds the former Congressman was doing on behalf of the Greek American community and asked him to take initiatives to prevent Turkish aggression.

“If you don’t take initiatives, the Turkish aggression will escalate in the future and then who knows?” Kotrotsios said.

“I think the Greek community knows me very well and knows that I’m extremely aggressive and that I get things done,” Grimm responded. “I don’t just say things. A lot of politicians speak. They offer a lot. They make a lot of promises. I’m a person that actually gets things done. That’s my track record and I’m looking forward to getting back to work,” Grimm said. “As an honorary Greek, the Greek community can always count on me.” 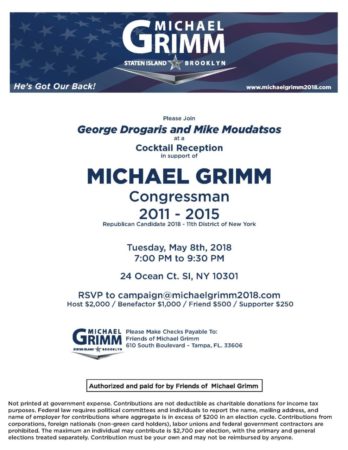