Capital Link Forum: Why Invest in Greece?    By Penelope Karageorge 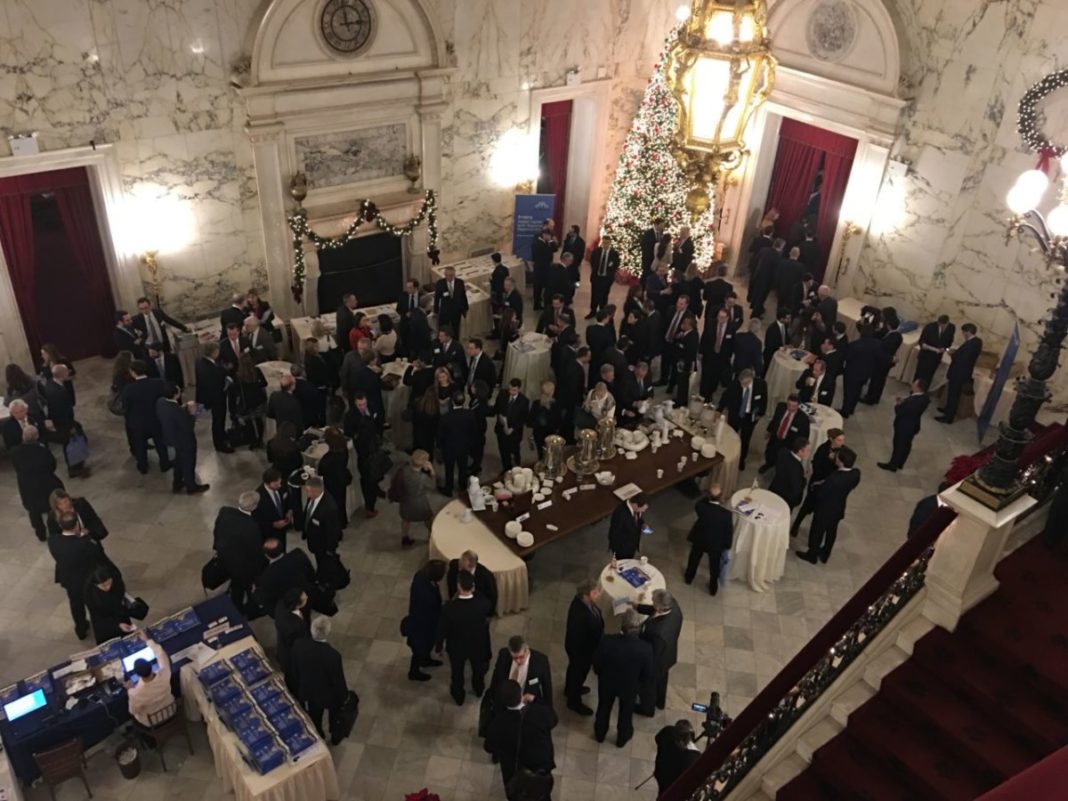 “Greece is open for business.” That message came across loud  and clear, sounded by Dimitri Papadimitriou, Greece’s Minister of Economic Development at the  18th Annual Capital Link Invest in Greece Forum, an all-day symposium of political and economic leaders in Manhattan. The magnificent Metropolitan Club, erected in 1861 by Cornelius Vanderbilt and friends, offered a marble and gilded backdrop  — as well as an ironic setting — for debate about Greece struggling its way out of an extended period of privation, pushing  forward into what portends to be a positive future. In a brief on-screen welcoming message, Prime Minister H.E. Alexis Tsipras urged: “In 2016, the government regained an economic friendly environment. Greece is once again a safe and promising place with great potential. Choose to be a part of this revitalization.” If not everyone agreed, hope was in the air.

Nicholas Bornozis, president of Capital Link, Inc. welcomed speakers and forum goers  to the symposium with an “18-year track record of fostering closer relations between the Greek and American business and investment communities.”  Bornozis deserves enormous credit for creating this annual gathering . Greeks are talkers, and speech flowed in a day that proved numbing as well as exhilarating. The traditional bugaboos kept popping up.  The tax problem. The red tape nightmare.

In his opening keynote speech, Papadimitriou,  head of Economic Development, stressed that Greece was “returning to positive growth. We are exiting the economic turndown. Last year saw an all-time peak in tourism. A new tax law is in place that will reduce the tax burden for the private sector. New developments include a modern land registry system. Greece offers competitive advantages, a developed country with a high caliber labor force.”

A roundtable discussion by private investor business leaders titled “Moving Forward – Investment for Growth” shed some vitally needed light on the problem. Speaking out for Greece, Theodore Fessas, chairman of Quest Holdings said: “Greece is a blessed country. The climate and the people make it optimal for investments. The political climate creates the difficulties. But the time has come when the politicians  are going  mainstream for business.” Anastasios Kallitsantsis, chairman of Ellaktor,  claimed that Greece was dragging its heels. “Few reforms are complete There’s an urgent need for the state to work with the business community. We could do marvels if we worked together.”

John Catsimatides, well-known New Yorker,  chairman and CEO of the Red Apple Group, said:  “I was born in Greece. I always wanted to invest, but things stopped us. The European Union and Germany must straighten out. Otherwise – putting money in Greece now – it’s hard to write the check.  It must be a long term deal and we’ll go in, but there must be European and German commitments. With Germany, Greece has a constant gun at its head that creates uncertainty. Perhaps President Trump can sit down with the European community. I love Greece, but why take a chance?”

Michael Psaros, cofounder and managing partner of KPS Capital Partners won spontaneous applause with his brutal assessment of the issue. “There is no prouder Greek-American than myself,” he said. “I’m a manufacturer and industrialist who has facilities in almost 100 countries. Greece must understand that it’s competing for foreign investment from countries around the world and all the states in the United States.

“It’s inconceivable that I would invest one dollar with this government in power. Greece needs a government that’s pro business and pro capital. They should stop talking and invest to help you make money. Greece has brilliant people, but we go to Poland to invest, to Portugal. In Lisbon, we created hundreds of jobs. We went to China and invested. They welcomed us and encouraged us to make money. Nobody wants to invest in a country suffering from imposed austerity. Greece has huge intellectual and human capital, smart people with English fluency. Its people are its biggest resource. Change the government and increase the creativity.”

Elena Kountoura, Greece’s Minister of Tourism, provided the Forum with good news. Notable for her imaginative, far-reaching approaches, as well as her energy, Koutoura said that 2016 was a record year for Greece tourism, with visitors exceeding all previous years. New developments include extending the tourist season, offering new destinations,  reaching out to  new markets abroad, more direct flights to Greece. Athens is being developed as an important tourist destination – not just the place to stop before going to the islands. Ski resorts, golf courses, new marinas, and theme parks are all on the horizon in Europe’s “Florida.” Mixed use resorts (hotel rooms and permanent apartments) are another new development. Spyros Spyropoulos of Oaktree Capital Management said the new goal is to reach the affluent traveler.

Kountoura pointed out  potential dangers. “We want to create a friendly environment for investments,” she said, “but we don’t want to endanger the authentic Greece. The traditional islands. We want luxury travelers and the middle class. There are so many opportunities for investors. We want a balance. Greece has safe waters. Yachting can be strong. Consider it a win/win situation offering great opportunities for investors.”

Richard Scoutfias,  manager in Greece of TAP (Trans Adriatic Pipeline) said: “The experience has been overwhelmingly extremely positive. Everything went on schedule. We had great government cooperation.”

At the end of the day, the majority of Forum goers agreed that with the ups and downs, positive and negatives, Greece was definitely on the way  up. Christos Antonopoulos of KPMG-LLP said, “I have a positive vibe. Fifty percent of the economy is psychology. There was a miserable atmosphere surrounding the Greek economy for many years. This is changing. Of course, Greece needs to share its views with the world. We can’t be the scapegoat forever.”

Wilbur Ross, chairman and CEO  of WL Ross & Co. received the 2016 Capital Link Leadership Award for his outstanding contribution to Greece. Presenting the award, Bornozis said: “Besides being a significant and long-term investor, Mr. Ross has provided unique leadership and direction in terms of how to put the Greek economy back on the sustainable growth trajectory.” President elect Trump has selected Ross as Commerce Secretary.