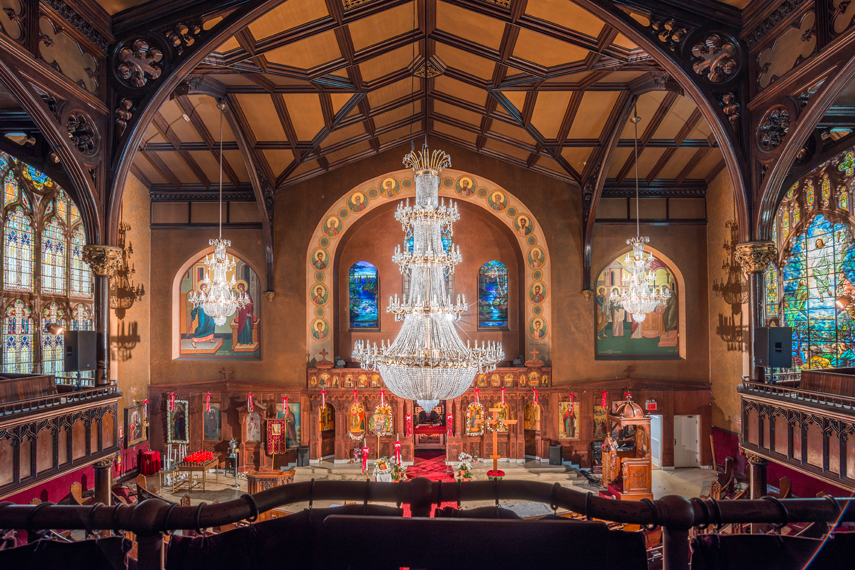 New York City’s Oldest Greek Orthodox Community Celebrates 125th Anniversary with Historic
Walkathon, Divine Services, and Celebratory Luncheon
New York, NY – August 15, 2017 – In celebration of 125 years of faith, community, and culture since its original
founding in 1892, the Annunciation Greek Orthodox Church invites all New Yorkers to participate in Anniversary
events: historic Preservation Walkathon fundraiser on Saturday, September 30 and Hierarchical Divine Services
with following celebratory luncheon on Sunday, October 1, 2017.
On Saturday, September 30, 2017 members of the Parish and guests from the community follow in the footsteps of
the church history, participating in a Walkathon to raise funds for the preservation of our church building. The
historic walk begins at 9:45 AM at Judson Memorial Church (Washington Square South) stopping at three
additional stops historic church sites (West 30th St., West 54th St., and West 85th St.) ending at the current Parish
home. Along the route, costumed characters from the period will meet walkers, informing them of world, social, and
church events relating to each site. Those who wish to walk or donate to the church restoration may do so by going
to the church Web site: www.annunciation-nyc.org
On Sunday, October 1, 2017, 8:30 AM church hierarchy, dignitaries, community members, and guests come
together for Divine Services. His Eminence Archbishop Demetrios, Geron of America presides over the 125th
Anniversary Hierarchical Divine Liturgy. Co-celebrants include V. Rev. Archimandrite Father Chrysostomos Gilbert
(current parish priest), Rev. Archdeacon Panteleimon Papadopoulos, and Rev. Deacon Eleftherios Constantine.
Christos Stavropoulos, Protopsaltis and the Annunciation Choir under the direction of Michael Janaros Cofield will
sing the hymns and responses for the service.
Immediately following Divine Liturgy, a formal 125th Anniversary Luncheon honoring the philanthropic works of
parishioners Nicholas and Julie Sakellariades will take place in the Parish hall. Luncheon tickets are available for
purchase online through the church Web site. Limited seating is available.
At the time of its founding, the New York Greek Orthodox Society of Athena community was one of only three
Orthodox parishes in the contiguous United States, and the only one east of the Mississippi River. Since its 1892
founding, the community of Orthodox faithful has evolved from assembling at a restaurant in the Two Bridges
neighborhood of New York’s Lower East Side, to the basement of a German-Swiss Evangelical Church located at
340 West 53rd St. to the basement of Judson Memorial Church (then at West 4th St.). By 1894 the community
found itself operating out of the Asbury Methodist Church at 5th Street and East Washington Square. In the years
1907, 1908, and 1909 there were three respective moves.
After dotting its way across the city, the growing West Side Greek community created a few church homes that
were newer, larger, and more permanent. In May 1913 the “Down-Town Greeks” purchased Amity Baptist Church
at 308 West 54th St, (whose design was inspired by Aghia Sophia in Istanbul [Constantinople], Turkey). To make
way for the new 18th Police Precinct, in 1938 the City of New York forced the community to move yet again. This
time further north to 325 West 85th St. where the church found a home until 1953.
With the 85th St. Church operating at near capacity, in December of 1953 the Evangelismos community purchased
the historic church edifice owned by the Fourth Presbyterian Church on the corner of 91st Street and West End
Ave. The 1894 Gothic Revival/Richardsonian Romanesque designed by noted Philadelphia architectural firm Heins
and LaFarge boasted not only an ample-sized sanctuary but also a five story formal rectory and a two story Parish
House. Decorated with the finest of stained glass windows by L.C. Tiffany and Benjamin Sellars the Greek
community also inherited a landmark clock tower by E. Howard of Boston, and 1927 symphonic Skinner Organ.
Late January of 1954 witnessed a great solemn procession through West Side streets as the community of faithful
carried forward their treasured church artifacts and icons to officially transition into their new home. 1957 saw the
installation of a large hand-carved orange and lime wood Byzantine iconostasis commissioned by the community.
Carved by famed woodworker Theofanis Nomikos, the iconostasis at Annunciation is a scaled-down of his original
1931, larger work found in Athens at the church of Aghios Dionyssios Areopagitis. Completing the iconostasis are
six large-scale icons by Bronx-based iconographer Constantine Youssis.
# # #
Share
Facebook
Twitter
Pinterest
WhatsApp
Linkedin
Email
Viber

Previous article
Crozer-Keystone to Host Event Aug. 16 to Celebrate National Recognitions for Crozer Burn Center
Next article
The Fallacies of the Cyprus “Problem”