The Chicago Bulls and Calamos Investments today announced a multi-year partnership that makes the metropolitan Chicago-based global asset manager the first company to display its logo on the Bulls court apron in the United Center.

Calamos will sponsor a new Chicago Bulls “Rising Player” content franchise that will appear regularly on the team’s social media channels throughout the season highlighting a player whose performance is on the rise. The partnership also provides Calamos with digital signage in-arena, as well as access to unique Bulls hospitality experiences.

“Today’s announcement represents the beginning of a strong relationship between the Chicago Bulls and Calamos, a company that shares our belief in the value of hard work and a commitment to true partnership,” said Michael Reinsdorf, President and COO. “We gave a great deal of consideration to what company would be featured so prominently on the court when we play at the United Center, and so we are thrilled to have a company of the Calamos’s caliber be the first to have its logo on our court apron.”

“Our special partnership with the Chicago Bulls aligns values that go beyond typical sponsorship agreements,” said John Koudounis, Chief Executive Officer of Calamos Investments. He continued, “Not only do we share our love of Chicago, but both our businesses depend on teamwork, strategy and high levels of execution to succeed for the long term. We are confident that Calamos’ affiliation with the Chicago Bulls’ renowned franchise will support the visibility of our global brand as we continue to execute our growth strategy.” 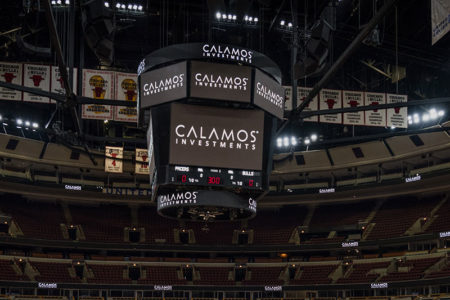 About Calamos Investments – Calamos Investments is a diversified global investment firm offering innovative investment strategies including alternatives, multi-asset, convertible, fixed income, and equity. The firm is ranked #1 in asset flows within Morningstar’s alternative mutual fund category for 2018 and has seen significant overall asset growth in recent years. Clients include major corporations, pension funds, endowments, foundations and individuals, as well as the financial advisors and consultants who serve them. Headquartered in the Chicago metropolitan area, the firm also has offices in London, New York, San Francisco, and the Miami area. For more information, please visit www.calamos.com.