Orthodoxy and Hellenism: A Potent Force Together 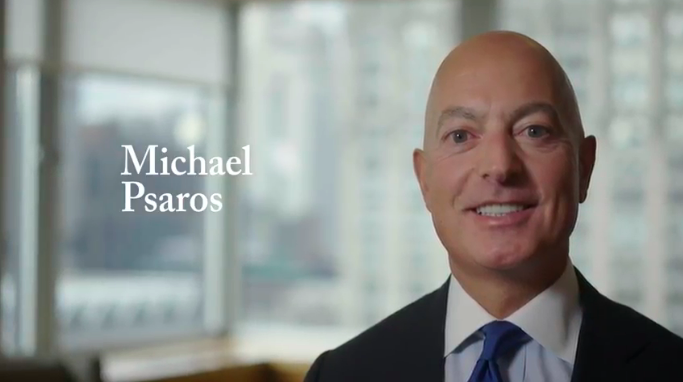 By David Bjorkgren & Aphrodite Kotrotsios, Special to the Hellenic News of America

The future of Hellenism in America is assured as long as there are people like Michael G. Psaros to lead the way.

Psaros is co-founder of KPS Capital Partners, LP, a private equity fund manager, but his passions take him far from the office. The second-generation Greek American is an Archon of the Order of Saint Andrew and former Treasurer for the Greek Orthodox Church of North America.

He is known for his charitable works and for leading and supporting several philanthropic groups.

“To those whom much has been given, much is expected,” he said, quoting from the Gospel of Luke. In that spirit, he is a founding member of FAITH: An Endowment for Orthodoxy and Hellenism. He serves on the Board of Trustees of The Leadership 100 and on the Executive Board of The Hellenic Initiative.  He is a benefactor of the Washington OXI DAY Foundation. He has supported the Orthodox Church in Korea, Mexico and Africa.

He counts his family, his church and Georgetown University as the major influencers in his life.

His parents were born in West Virginia. His maternal grandmother, from Chios, Greece; and his paternal grandfather, from Halicarnassus in Asia Minor, orphaned at age 4; were the “two giants in his life.”

His grandfather lived his teen years in the British Merchant Marines and worked on a hospital ship during World War I.  His grandfather remembered sailing into the Constantinople harbor at the end of the war. “Greek flags were flying all over the city. It was the king’s birthday and all the Allied Navy fired their guns off in salute.”

His grandfather came to the U.S. around 1919 at age 20. He worked 12 hours a day as a barber, and was “the toughest guy I ever met” but would cry at the drop of a hat because he had such love in him, Psaros said. He learned politics and history at his grandfather’s side and was the best teacher Psaros would ever have.

His grandmother was a poet who went no further than the third grade in Chios, yet was the most educated girl in her village. She taught Psaros the power of the written and spoken word, reading him passages from The Iliad before he was even in kindergarten.

She was also deeply religious, which gave Psaros his love of church.

His parents gave him his work ethic. His father was a steel mill executive, working 12 to 16 hours a day, seven days a week, as head of maintenance at a massive, blast furnace, integrated steel mill.

His mother was a public school teacher for 37 years who devoted her life to her students and her family.

“You just work hard in our family. That’s what we do. You expect nothing is going to be given to you.”  There was also a love of home and community growing up in West Virginia. He learned from his parents and the community where he lived that people took care of each other.

It was from those influences that Psaros emerged determined to give back as much as he could, and shares his passion for philanthropy with his wife, Robin. They created the Michael and Robin Psaros Family Foundation that they are funding to further their philanthropic interests.

Psaros is a benefactor of the St. Nicholas National Shrine at Ground Zero and it is a project close to his heart. Construction has stopped because of the financial and administrative issues.

“I fear in our community outside of New York, the St. Nicholas National Shrine is viewed as just another church. It is not. There were 3,000 human beings massacred and martyred by Islamic fanatics on 9-11,” he said. “It is a sacred place.”  He points out that the Greek Orthodox Church is the only religion of any kind that has a church at Ground Zero.  Estimates from New York officials and the Port Authority are that the rebuilt church would be the most visited church in the United States and possibly the western hemisphere. “It is the ultimate emblem of orthodoxy in the United States.”

Psaros said he intends to be involved in the next fundraising effort for the Shrine, conditioned on the creation of a new legal entity and organizational and administrative structure for the project, with proper independence, governance and controls.  “Elaine Allen is working on this new structure. This is an absolute requirement. It is going to be designed to provide future donors with a level of confidence that they can donate to the construction of the church with a full level of transparency and accountability,” he said.

Going forward, he sees the church and the secular Hellenists working together to keep Hellenism alive in America. When the church or Hellenism stands alone, it is like they are breathing with only one lung.

What is often missing in America is that the Greek community does not feel a part of the church of Constantinople with its direct apostolic succession, he said.

“If you ask any Catholic kid who is the Pope, they’ll tell you it is Francis. If you ask the youth in the United States who is the Ecumenical Patriarch of Constantinople, you will receive a blank stare.  That cannot continue. We are the most important Eparchy of the Mother Church and have a responsibility to support Constantinople in every way.”

Psaros is a big booster for The Hellenic Initiative, a secular organization that has seen explosive growth. “One of the most important things THI has done, it has connected with the youth.”

Unlike other immigrant Americans, Greeks have a strong connection back to their homeland. “We are not just some group of hyphenated Americans. We know exactly where we’re from. We know the island. We know the village. We know the house.” That provides Greek Americans with dignity, knowing who they are and where they came from.  Greek Americans have contributed greatly to the American fabric across all fields and they did it by themselves, often starting off with nothing.

Keeping later generations of Greek Americans attached to that sense of place is critical for the Greek community. Organizations like The Hellenic Initiative, with is business and philanthropic approach, could help socialize those that are interested in their heritage back into the community.

To preserve Hellenism, everyone must work together, church organizations and secular. “I think it’s very important that these organizations start coordinating with each other.” A good test case to bring everyone together would be the St. Nicholas Shrine, he suggested.

Fixing a lot of the problems facing Greek Americans—a confidence crisis in the church, keeping the youth engaged—requires leadership, he said. “At the end of the day, the way you solve all those challenges is through leadership and engaging all, including those who aren’t part of our active community,” he said.

Everyone talks about focusing on youth in their organizations, but it’s always the same people at the meetings, he said.

“To the young people that are energetically enthusiastically and emotionally involved in our community to you I say ‘Αξιοι’.  Talk to your peers. Share your enthusiasm. Share your commitment. Explain to them why you are so involved.”

The only thing any of us really leave behind is our children, Psaros said. He remembers his grandfather would look at photos of his children and grandchildren. “He would say I have more than Rockefeller. ‘Eδώ είναι τα πλούτη μου’.   At the end of the day, that’s all you leave behind. It doesn’t matter how big your estate is, how much money you have, but family and legacy is all that matters.”