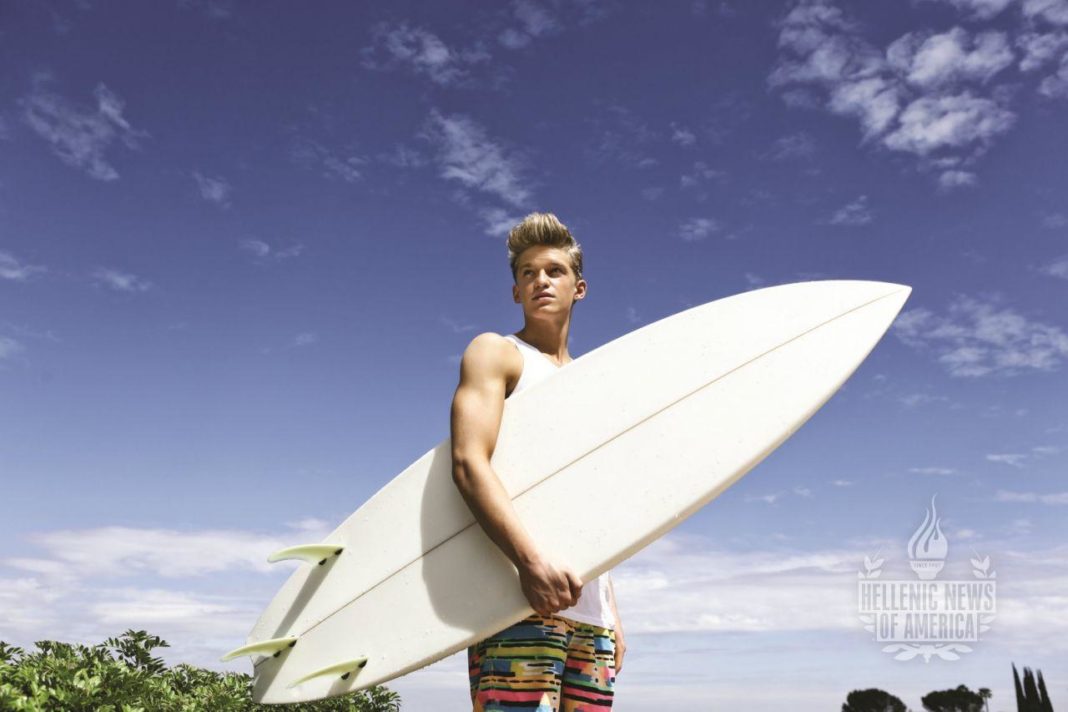 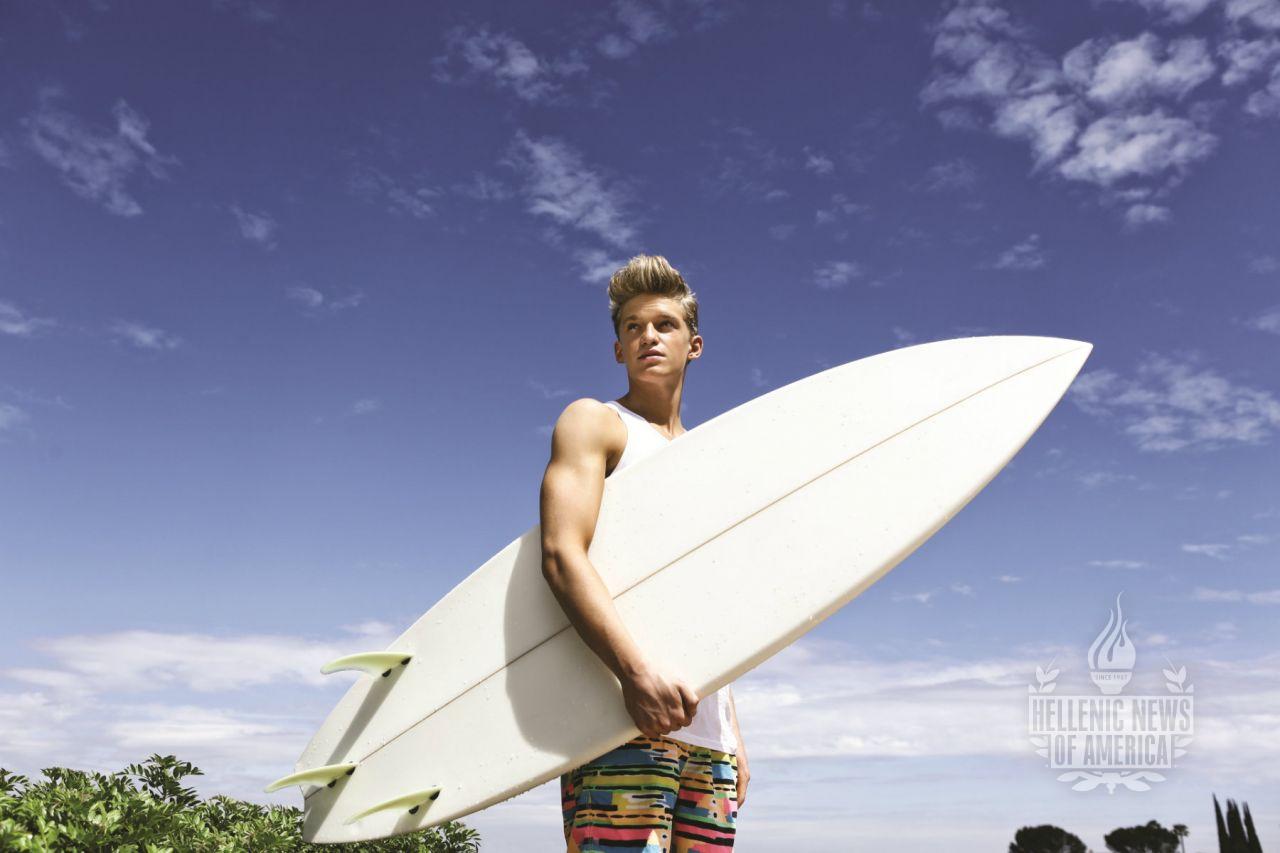 On April 23, pop music sensation Cody Simpson chatted via telephone with Markos Papadato about his newest radio single “Pretty Brown Eyes” and his upcoming studio album, as well as his musical endeavors and plans for the future.

His latest single “Pretty Brown Eyes” is available on iTunes and its music video premiered on YouTube, which was well-received by pop music fans worldwide. “I wrote it about a girl with pretty brown eyes. It is a quite simple song, but it is a fun summer record,” he said. “I thought it was the perfect song to put out.”

Cody has shared the stage with pop superstar Justin Bieber and he completed his very first headlining tour in Europe. “First of all, Europe was incredible and we had the opportunity to travel in many different cities. Every day I woke up on a tour bus and I would be in a different country, where people spoke a different language and it was a mind-blowing experience to meet fans from so many different cultures. Also, touring with Justin was cool too. It was an honor to tour with him and it was pretty crazy trying to balance both tours (my tour and Justin’s) but it was a great experience,” he acknowledged.

He will be kicking off a headlining tour on May 30 in Jacksonville, Florida. “I am excited about this since it’s a big headlining tour for me. It begins in one month and within the next two weeks, I will start rehearsals. I have opened for a lot of artists over the years, but it means a lot to have my own headlining tour. I am excited to be on tour once again. I cannot wait to go out and perform again. It is an awesome opportunity,” he said.

Cody is expected to make a tour stop in New York City’s Best Buy Theater on July 18. “I am excited to perform in New York. My fans can expect the best show that I have ever put together. It will have more production than the past, as well as more opportunities to showcase the different things that I do live. I would really like to take my fans on a journey to ‘paradise’ on this tour,” he stated.

Cody noted that although his hectic travel schedule is the hardest part of his job as a musician, it is simultaneously the most rewarding. “The positives outweigh the negatives, so it is definitely worth it,” he admitted.

He revealed that “Awake All Night” is one of his personal favorite songs that he has ever recorded. “It’s an acoustic record that I put out online a few weeks ago and it’s going to be on the new album. I wrote and produced this song entirely myself so I am really proud of that,” he said.

Cody noted that another favorite song of his is “Wish U Were Here,” which is a collaboration with Becky G.

On April 27, he will be performing at the Radio Disney Awards, where he is nominated in three categories, which include “Best Male Artist,” “Best Crush Song” and “Fiercest Fans.” “That is great. I plan to put on a great performance and I am honored to be nominated in these three categories. That is pretty insane to be in the company of such great artists. That is exciting for me, whether or not I win, it’s a thrill to be nominated,” the Aussie native said.

Presently, he is working on his forthcoming studio album, which is expected to be released this summer. “The album should be coming out in July and I am close to finishing up the process. I think I hit the nail on the head with this album and it’s going to be awesome. We have a lot of songs on there that are acoustic and mellow and some other songs that fit the ‘Pretty Brown Eyes’ vibe,” he revealed.

Cody shows no signs of slowing down anytime soon. He will be releasing his autobiography “Welcome to Paradise: My Journey,” which will be published on Oct. 24. “I would like to bring my fans closer to me than I already have. I have so much to tell and I wanted to tell them my story in my own words, the way that I wanted it to be told. I would like to share with them some information that they might not already know about me,” he shared.

Although Cody has had the great fortune to sing “Good Time” as a duet with Carly Rae Jepsen while on tour with Justin Bieber, he listed Taylor Swift and Colbie Caillat as his dream female duet choices in music. “Taylor and Colbie are really cool and I would love to do something with them one day,” he remarked.

For aspiring musicians, Cody underscored the importance for them to believe in themselves. “Trust your own abilities and instincts. It’s important to take advice and opportunities from other people. It’s important to follow your own heart and do what’s best for you. Work as hard as you can since nobody has ever done anything great without the hardest of work behind it,” he said.

In his spare time, Cody enjoys staying active by partaking in such activities as surfing, skating, going to the movies and spending time with friends.

For Cody Simpson, there is no measure on the word success. “It involves being happy with where you are and when you have achieved what you wanted to achieve. I always want to take the next step and do more and be better,” he concluded.

For more information on Cody Simpson, visit his official website and to view his music video for his latest single, click here.