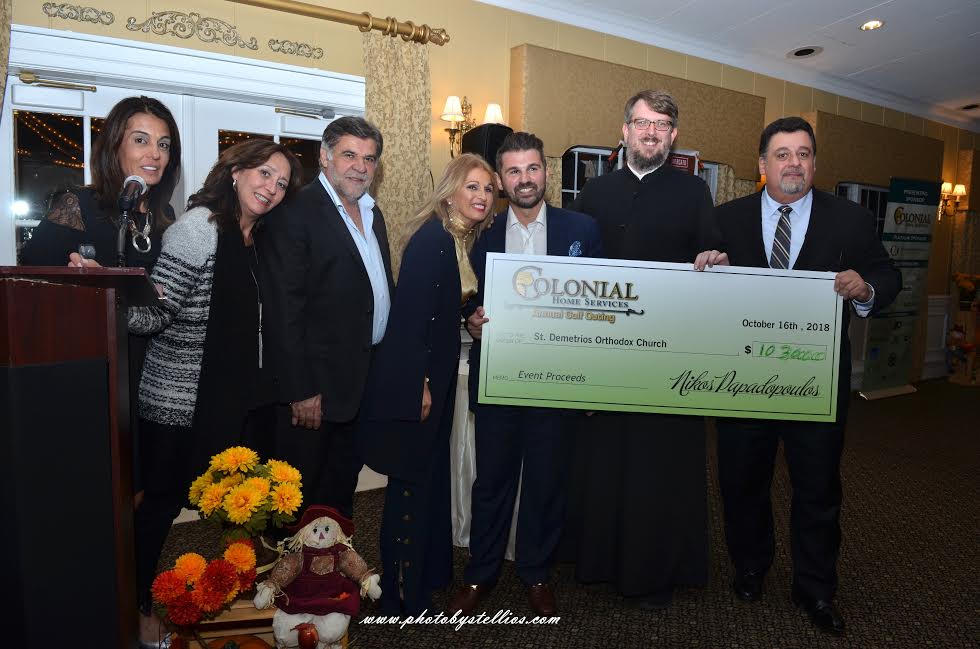 West Chester, Pa. – On Tuesday, October 16, Colonial Marble & Granite raised over $103,000 at the Third Annual Golf Outing, to support the Saint Demetrios Greek Orthodox Church in Upper Darby, PA. The event, held at Penn Oaks Country Club, brought out more than 70 golfers and over 100 guests who were greeted with a warm welcome from Nikos Papadopoulos, President, Colonial Marble & Granite. Papadopoulos thanked those in attendance for their continued support of the church as well as their charitable donations. The proceeds from the event directly benefit the Saint Demetrios church.

Saint Demetrios, which has provided for those in need for over 75 years, has contributed to causes like the “Feed the Homeless” project, which feeds about 250 homeless people every month. The church also donates winter jackets and dry foods to orphanages throughout Greece, in addition to donating year-round to the Ronald McDonald House.

“Colonial Marble & Granite is honored to be able to provide help and support to the Saint Demetrios church through this event,” said Papadopoulos. “They are a church that consistently goes above and beyond to help those who truly need it. Our contribution pales in comparison to the incredible work they do all year-round. Each year this event draws an even bigger crowd and I’m happy to support a congregation that I’ve been a part of since I was a child.”

Golfers were encouraged to build their own beverages while snacking on a variety of Greek foods served by the church. As participants and guests made their way inside the country club for cocktail hour, they were greeted with a scotch and bourbon tasting bar and gifted a Colonial Marble & Granite windbreaker. A raw seafood bar and a gourmet dinner rounded out the elegant menu.

Philip Nicolaides, President of Parish Council, spoke on behalf of the church. “We are so grateful that Colonial Marble has been doing this with us for three years in a row,” said Nicolaides. “We hope to do it for many years to come because we’re able to give so much to the charities.”

The successful event generated an impressive number of donations that will fund various causes supported by the church.