Entertainers, Comedians, Music and Sports Legends Join Forces for One

Tickets are available now at CrissAngelHELP.com

With the same passion and grandeur Criss lends to his craft, he is setting the ambitious goal to raise $1 million in a single evening. Every dollar generated will benefit pediatric cancer research, treatment and ultimately a cure through the Johnny Crisstopher Children’s Charitable Foundation, a nonprofit organization named after Criss’s young son who was diagnosed with Acute Lymphoblastic Leukemia (ALL) last year.

“Every three minutes a child will be diagnosed with cancer, and less than 70 cents out of every $100 raised by the American Cancer Society goes to pediatric cancer,” Criss said. “We must bring awareness and funding now to help these children and families living with this nightmare.” 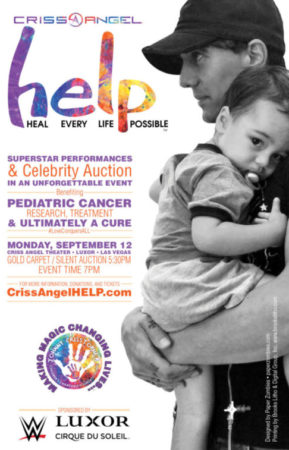 In addition to celebrity performances, attendees will have the chance to win priceless experiences and memorabilia in HELP’s live and silent auction. One-of-a-kind experiences including a weekend at Criss’ personal estate, Serenity, with all the VIP trappings; a private magic lesson and behind the scenes backstage pass to see how Criss pulls off the spectacular illusions in MINDFREAK! Live; a luxurious Caesars Palace Celine Dion weekend including dinner at Restaurant Guy Savoy, a two-night stay and weekend including dinner at Restaurant Guy Savoy, a two-night stay and tickets to see and meet Celine Dion; a UFC 207 VIP package with tickets and a meet and greet with Dana White; show tickets and meet and greets with Jennifer Lopez and Britney Spears; autographed memorabilia from Oprah Winfrey, Shaquille O’Neal, Floyd Mayweather, Elton John, Mike Tyson and many more.  Additional experiences and items will continue to be added.

“I can promise this will be a night to remember,” said Criss. “Thanks to my celebrity friends, many unsung heroes and my insanely generous partners,

Cirque du Soleil and MGM Resorts/Luxor Hotel & Casino, for the outpouring of love and support and making this incredible night possible,” Criss said.

HELP will be held at the Criss Angel Theater at the Luxor Hotel & Casino in Las Vegas on Monday, Sept. 12, 2016. Doors open for the silent auction and the gold carpet begins at 5:30 p.m. followed by a celebrity auction at 7 p.m. and the live show at 8 p.m.

Please go to CrissAngelHELP.com for more information and to join the fight against pediatric cancer.

For more than a decade, Criss Angel has been tireless in his efforts to help children. As a result of his work and dedication to the Make-A-Wish Foundation, he has received the Make-A-Wish Grantor of the Year Award and the Chris Greicius Celebrity Award.

Unlike many organizations, the Johnny Crisstopher Children’s Charitable Foundation donates 100% of every dollar raised. No expenses are deducted out of any donation. Criss has funded the charity out of his own pocket since the foundation was formed on March 11, 2009 (originally named Believe – Anything Is Possible) in honor of his father, John Sarantakos, who passed away from stomach cancer on February 12, 1998. The foundation was renamed and refocused last fall when Criss received the horrible news that no parent ever wants to hear: “Your child has cancer.” Criss and Shaunyl Benson, the parents of two-year-old Johnny Crisstopher, were devastated when he was diagnosed with Acute Lymphoblastic Leukemia (ALL). It was at that moment when Criss decided to revitalize his commitment to cure pediatric cancer.

Now, Criss’s mandate is to raise awareness about pediatric cancer and expose the disproportionately low amount of dollars spent on this leading cause of death by disease in the U.S. “The National Cancer Institute’s federal budget was $4.9 billion in 2015,” Criss said. “Less than 3% of those funds were spenton the 12 major groups of pediatric cancer combined. This needs to change and I’m committed to do whatever it takes to get it done. I hope that you’ll join us in our mission to shine a light on a very difficult reality. Innocent children and their families are dealing with life and death every moment of every day. We can all play a part together to one day make this dreadful disease disappear.” Criss and Shaunyl are currently shooting a documentary about their son’s battle with cancer entitled 1095 for the amount of days he will undergo treatment for his leukemia.

Previous articleNew Ambassador of Greece to the United States Haris Lalacos presented his credentials to President Barack Obama
Next articleEntrepreneur brings Greek American support to Donald Trump. Marafatsos has been selected to represent the Greek and Cypriot American community on the National Diversity Coalition for Trump