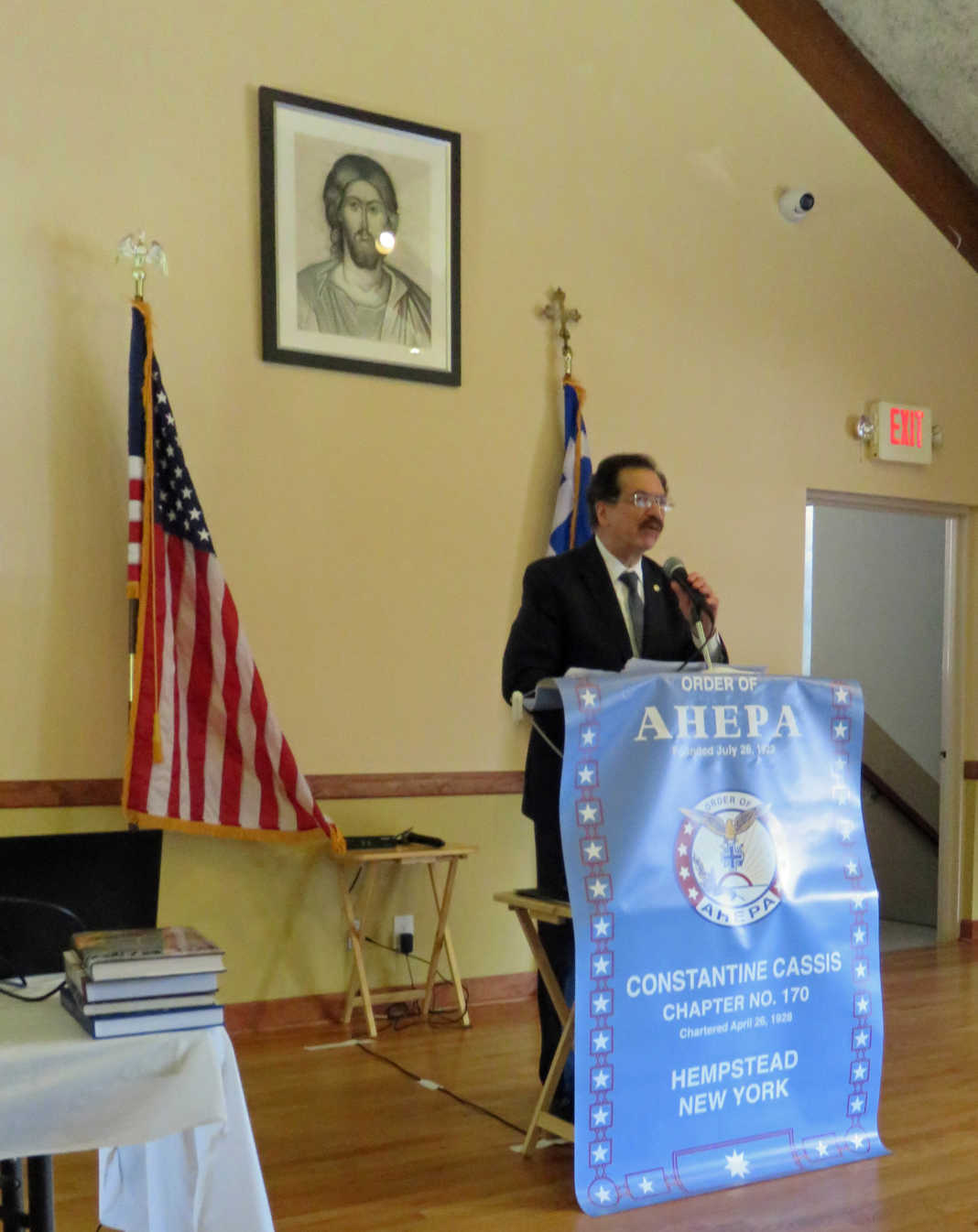 5,000 years ago, Greek civilization emerged in Western Anatolia about 3,000 B.C. “Sparked by the Aegean search for metals and technological skills, these seafaring contacts inevitably led to cultural and artistic influences from east and west, with the islands of the northeastern Aegean and the Cyclades acting as stepping stones between the Greek mainland and Western Anatolia.”1 The Golden Age of Greece was ignited by Smyrna and the Greek Cities of Asia Minor, Western Anatolia.

“Right now, at this time, Hellenism was wiped out in Smyrna,” said President Lou Katsos EMBCA (Eastern Mediterranean Business Cultural Alliance) and AHEPA District 6 NY Governor. President Katsos is the recipient of the 2018 Panagiotis Sekeris Award of the  Pan-Arcadian Federation “Geros tou Morea Chapter”, New York. “Why should we be concerned over Smyrna? ” he stated. “It wasn’t just a city. Smyrna was the major business capital of the Middle East, Europe and the world. Business was operated primarily by Greeks and Armenians.”

President Katsos continued “The Smyrna Catastrophe  (in the Hellenic – Καταστροφή της Σμύρνης) refers to it being deliberately set on fire four days after Turkish forces entered and captured the port city of cosmopolitan Smyrna in Asia Minor and which completely destroyed its Hellenic and Armenian quarters. The estimated Hellenic, Armenian, and other deaths resulting from the fire range up to 100,000 and approximately up to 400,000 Hellenic and Armenian refugees in the city from other parts of Asia Minor to escape the Turkish Troops and irregulars cramming its waterfront and quays to escape from the horrific flames.”

The AHEPA Family of Hempstead including Constantine Cassis Chapter# No. 270, NYS AHEPA District 6, National AHEPA Hellenic Cultural Commission and EMBCA presented Seraphim Cannoutas Lecture “The Hellenic Genocide 1895-1823”, on September 15, 2019, at the Hellenic Room of the Greek Orthodox Cathedral of St. Paul’s, Hempstead, NY. A filled room of over 150 persons attended.

The Program featured: Moderator / Panelist—District 6 Governor Lou Katsos on “Η Σμύρνη μάνα καίγεται.. / Mother Smyrna is burning.”; Panelist—Dr. Peter Stavrianidis, on “Asia Minor – A Journey of Glory, Tradition and Genocide” and Panelist—Supreme President of the Sons of Pericles Paul Pavlakos on “Ensuring Never Again – How you can get involved in Hellenic Genocide Recognition Efforts”.

Anastasis Stampolis, dedicated President of AHEPA Constantine Cassis Chapter# No. 170 was the reason many of us attended. His charismatic personality is helping this chapter grow. ‘Our lecture had many questions,” he explained. “People were intrigued, asked questions and wanted more answers during the Refreshment Hour. Many prominent persons attended including: Cleanthis Meimaroglou, President of the Federation of Hellenic Societies of Greater New York with Bill Gournelos, Board Member; Metaxia Liza; Evageline Plakas; Parthena Neofytidis Vassiliadis; Dr. Louisa Patsis: Dr. John G. Siolas and other prominent members.

Dr. Peter Stavrianidis gave an informative powerpoint presentation. He is of Pontian background, describing catastrophic events. “King Constantine did not want the Asia Minor refugees, because they would have swayed elections and vote for Eleftherios Venizelos as prime minister. They were called “Turko spori”, the seeds of the Turks. ”At another meeting that day, educator Mrs. Efrosini Mancini explained, “not only the King but no one wanted the Greek refugees, who were better educated and middle and upper-middle class.”

Mr. Paul Pavlakos said “What are we doing to make awareness of the Hellenic genocide? We must inform the government and politicians and social media to recognize the systematic elimination of Christians.” For more information, contact ORDER OF AHEPA American Hellenic Educational Progressive Association WWW.AHEPA170.ORG.

Mr. Katsos revealed the latest scholarship on the rescue efforts in Smyrna in 1922, citing the January 5, 2018, National Herald article by Mr. Stavros T. Stavridis. Christos Papoutsy’s 2008 book “Ships of Mercy” was reviewed by Catherine Tsounis on greeknewsline.com on September 21, 2009. She wrote that according to Papoutsy, “Japanese naval ships were not the primary rescuers of the Greeks…but Japanese naval ships were not even present in the Smyrna Harbor during September 1922, never mind leading the rescue.” Three sources of the Japanese Military History Department, the Japanese National Institute for Defense Studies, and the Information and Culture Center of the Japanese Embassy in Washington, DC are cited which indicate that “no Japanese military or merchant vessels were in these waters.” However, Papoutsy believes “that a Japanese fishing vessel or merchant ship was present in a nearby harbor…such a vessel provided some help.”2 Dan Georgakas, from family accounts, and Embros Athens newspaper September 4, 1922 described the event in details at https://www.thenationalherald.com/186540/tokei-maru-japanese-ship-smyrna-september-1922/.

The cutting edge scholarship by Christos Papousty in “Ships of Mercy: The True Story of the RESCUE OF THE GREEKS Smyrna, September 1922” was not mentioned. Mr. Papoutsy uncovered “Asa Jennings, a Methodist pastor, evacuated 350,000 persons from Smyrna.” For more information, visit http://www.helleniccomserve.com/tsounisshipsofmercyreview.html

During the lecture’s questions, Dr. Stavrianidis was asked “did the Greek Christians Have arms to protect themselves?  Dr. Stavrianidis amazed us with an answer that is not promoted on social media. “NO GUNS. THEY WERE SECOND CLASS CITIZENS.” This explains the Genocide of Armenians, Assyrians, Greeks and Christians of Lebanon during the Ottoman Empire. He inspired my research after the lecture. My grandmother, about the 1914 persecution,  said “we heard they were coming” in Tseme, 7 miles off the coast of Chios. They left their homes, lands, wealth with only what they could carry and a family icon. They were the defenseless, unarmed civilian population, who worked for their government, the Ottoman Empire, as businessmen with their fishing and cargo boats.

Dionysios Tsokos oil painting, “The Flight from Parga” (1847), is on display in the National Gallery of Athens. The painting, that was obtained through the help of former Benaki librarian Pitsa Tsakonas, displays a boat navigated by a maritime captain in a turbulent sea. The boat has average persons: despondent young, middle age and old in Greek dress, with a priest holding an icon and cross. Many Americans are descendants of refugees fleeing their homes with few belongings.” This painting was the face not only of Epirotans, but the Asia Minor refugees.

“In the Ottoman Empire, in accordance with the Muslim dhimmi system, Greek Christians were guaranteed limited freedoms (such as the right to worship), but were treated as second-class citizens. Christians and Jews were not considered equals to Muslims: testimony against Muslims by Christians and Jews was inadmissible in courts of law. They were forbidden to carry weapons or ride atop horses, their houses could not overlook those of Muslims, and their religious practices would have to defer to those of Muslims, in addition to various other legal limitations.[2] Violation of these statutes could result in punishments ranging from the levying of fines to execution. They wore a blue turban (sarik) on their heads.4  My deepest appreciation to Dr. Stavrianidis in explaining: the “no Guns for Christians” law; the persecution in Greece of Asia Minor refugees, who were not viewed as Greeks but children of the Ottoman Turks.

Congratulations to AHEPA District 6 NY Governor and EMBCA President Lou Katsos for the courage in creating this program. It is not politically correct in mainstream media. “Join us on Thursday, September 26 at the 3 West Club (3 West 51 St.) at 6 P.M. for EMBCA’s event entitled “Burnt Offerings and Whispering Voices: The Smyrna Catastrophe (September 1922), a Historical Remembrance,” he concluded. “The event will include presentations by EMBCA’s President Lou Katsos on “The Japanese Ship Tokei Maru- A Profile in Courage and Humanity”; Peter Stavrianidis, PHD Educator/Community Leader in Hellenic Genocide Issues on “Smyrna 1922, The End of Hellenism in Asia Minor; and  Professor Ismini Lamb the Director of The Modern Greek Program in the Department of Classics at Georgetown University on “Correcting Three Popular Misconceptions about the 1922 Catastrophe in Smyrna.”