CYPRUS, BELOVED SMYRNI AND OTHER LOST MOTHERLANDS, BELOVED Until when will Hellenism pay for its own blunders? 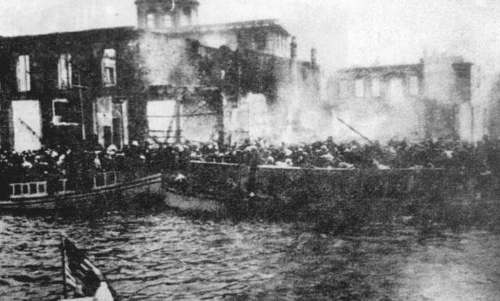 My dearest, when your beautiful body was up in flames reaching the stars

There was no God nor a human being to help you.

The day was speechless and the night was sullen

because people turned into monsters and God had gone away…

On the 14th November 1922 a Revolutionary Court martial was set up in Athens, which sentenced to death former Prime ministers Demetrios Gounaris, P. Protopapadakis and Nicolaos Stratos, former Ministers G. Baltatzis and N. Theotokis and Field Martial Hadjanestis and also sentenced to life imprisonment former Ministers Michael Goudas and X. Stratigos.   Those sentenced to death were executed in the morning of the 15th November 1922.  The legendary Greek leader Eleftherios Venizelos sent a telegram from Lausanne, Switzerland and tried in vain to stop the executions, pleading that the convicted persons “had acted with the consent of the people”.

Although the above judgment was reviewed in recent years, it constitutes the tragic epilogue of the Asia Minor catastrophe, which was the result, inter alia, of a number of blunders of hellenism.  The Lausanne Treaty of 1923 followed, which, according to Greek historians, was one of the saddest moments of  the history of Greece.  “The hellenism of Ionia, Thrace and Pontos had terminated its long and glorious march in history”.

It was a history and a civilisation of 3.000 years that perished.  And a population of one and a half million people who were displaced or slaughtered.

Smyrni, beloved, and also you Mimi Denisi, who through your excellent theatrical performance have brought to us the memories of those years.  It all started, Smyrni, with the landing of the Greek army into your embrace in May 1919 in a frenzy of patriotism and great dreams of the people and their leaders:  It ended up three years and three months later with the sad final curtain and the termination of 3.000 years of history, as a result of blunders and lack of planning by hellenism.

The great poet Angelos Sikelianos wrote about the above, in his “Prayer”:

“Spirit of pain, elevated through your sad struggles into the centuries

Listen to the people who are hamming like bees…

In their divine sorrow…

Fifty-two years later, in July 1974, Cyprus moved into the maelstrom of carnage, invasion and occupation.  Like Smyrni, what happened in Cyprus did not come fortuitously:

It was preceded by the glorious but very   poorly programmed struggle of 1955-1959 for union with Greece.  The outcome was not “union” but a crippled independence, with an upgraded turkish Cypriot element, which was elevated from minority to community with many privileges.  The Republic of Cyprus which was born in 1960 was the “orphan of the Mediterranean”, because its people (Greeks and Turks) never believed in it.  After all, the head of state, Archbishop Makarios, in a letter addressed to Greek Prime Minister George Papandreou in March 1964 wrote: “I am the signatory of these Treaties (London-Zurich, by which the Republic of Cyprus was created).  But not even for a moment did I believe, that this constituted the creation of a permanent state”, (Ambassador Kranidiotis: “Unfortified State”, Volume 1, page 135).  This is what the head of state wrote about the country he had created, even if four years earlier he had taken an oath of “faith to and respect for the constitution of the Republic of Cyprus”.  In parallel the Turkish Cypriots were working for partition.

So, what could be the chances and expectations of the “Orphan of the Mediterranean”?  None.  And the tragic outcome came about with the Greek coup d’ etat and the turkish invasion of 1974.  Something similar to the carnage of Smyrni:  37% of the territory of the country under occupation, 40,000 Turkish troops, foreign guarantees, 160,000 refugees, 2000 Greek and Turkish missing persons, 3000 people killed.

We now anticipate, 42 years on, the tragic epilogue, our own “Lausanne Treaty”.  But Lausanne like all types of “Lausannes”, after a lost war, are always, ruthless, hard and painful.

I personally lived through many of the tragic moments of Cyprus, either as a private individual or as a politician.  I took exception to the decisions taken, I shouted, I resigned from the post of Minister of Foreign Affairs.  But the course was always the same:  Empty rhetoric, unsubstantiated enthusiasm, lack of political acumen and wisdom, cheap “patriotism”, corruption, pursuit of public office.  Nothing else.  What a shame!!

During these critical moments I would like to repeat and underscore once more some of our tragic failures:

Nimetz told me that “Ankara was not negative”.  However, we rejected the Plan, despite my strong objections.  It was rejected by the “great patriots”, who gradually destroyed Cyprus, the same people who are objecting and shouting today as well.

Nothing happened.  We were always pursuing the unachievable.  In a world where, around us, people are bombed and perish, almost one half of the globe is immersed in blood and poverty we split hairs and we debate for weeks whether “Antigoni” should go to the occupied Salamis Theatre (which apparently must be punished because it was occupied, as a result of our stupidity as well).

We forget, dear Smyrni, that Ionia does not exist anymore and that none of the mighty people ever cared or were annoyed or did not have their whiskies, because Ionia was gone.

Similarly, nobody’s comfortable life was ever disturbed when Cyprus was occupied in 1974 and there was not even a single helping hand.

Perhaps God is still gone away.

I am glad that President Anastasiades is exerting a titanic effort, before it is too late.