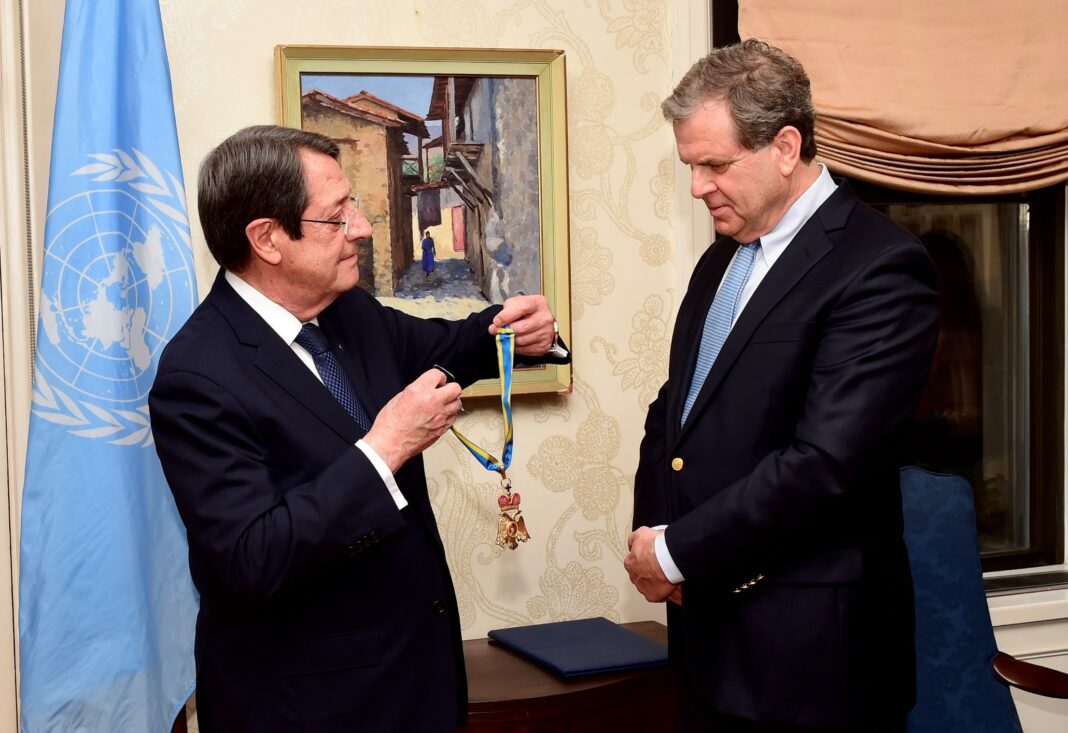 Cyprus honored American Jewish Committee (AJC) CEO David Harris today with one of the country’s most prestigious awards, the Grand Commander of the Order of Makarios III. Cyprus President Nicos Anastasiades presented the medal to Harris during a ceremony at the residence of the Cypriot Ambassador to the United Nations in New York.

“At the helm of AJC for more than three decades, your role has been absolutely instrumental in steering the evolution of your prestigious organization’s strong collaboration with Cyprus and expanding Cypriot ties with Israel and the United States,” Anastasiades said.

“Through your uprightness, resilience and creativity, you managed to promote a practical and tangible cooperation between many of the countries of the Eastern Mediterranean and to advance a strategic partnership between Cyprus, Greece, Israel and the United States, all of which share your vision of a peaceful and prosperous region,” he continued.

Harris, who has been visiting Cyprus since the 1980s, expressed gratitude for the honor. “Cyprus is a valuable, indeed essential, partner of Israel, the United States, and the Jewish people,” said Harris. He has often met with President Anastasiades over the past eight years, both in Cyprus and the United States. Anastasiades addressed the AJC Global Forum in 2017, and received AJC’s Light Unto the Nations Award in 2016.

The President saluted Harris for the “global recognition of your extraordinary work in defense of human rights and dignity, and in combating intolerance, antisemitism, discrimination and hate of any shape or form.”

And he extolled Harris’s leadership in seeking an end to the 47-year Turkish occupation of northern Cyprus and reuniting the island nation. “The Government and the people of the Republic of Cyprus are indebted to you for your steadfast support to our efforts in reaching a comprehensive and viable settlement of the Cyprus issue, in line with relevant UN Security Council resolutions,” said Anastasiades.

Representatives of Cypriot and Hellenic organizations in the U.S., as well as Greek, Israeli and American officials, attended the award ceremony.

“For nearly four decades, Cyprus and Greek-Cypriots around the world have been lucky to have enjoyed ‘philia’ or ‘friendship’ with David Harris. David’s contributions to this friendship were many,” said Endy Zemenides, Executive Director of the Hellenic American Leadership Council (HALC).

“He recognized the friendship’s potential – both in the Eastern Mediterranean and among the Greek American and American Jewish communities – from the start. He never allowed Cyprus to stand alone, and he supported landmark initiatives like the establishment of the Congressional Hellenic Israel Alliance and the Eastern Mediterranean Security and Energy Partnership Act,” Zemenides continued. “Cyprus is most certainly better off for this ‘philia’ and this honor is a fitting way to say ‘efharisto’ (thank you).”

Andy Manatos, a longtime Hellenic-American leader, also congratulated Harris on receiving the award, named after the first president of Cyprus.

“We welcome Cyprus President Nicos Anastasiades’ selection of David Harris to receive this prestigious award. As one of our nation’s leading foreign policy minds, Harris has significantly elevated the international status of the Republic of Cyprus,” Manatos said.

“In an earlier era, a prominent American Jew, Congressman Ben Rosenthal, Chair of the House Foreign Affairs Europe Subcommittee, played a profound role in the history of Cyprus. So, too, has David Harris today. Just as Rosenthal was instrumental to America’s imposition of an arms embargo on Turkey following its invasion and occupation of Cyprus, Harris has been instrumental to America and Israel’s understanding of Cyprus’ exceedingly valuable and supportive role in the volatile Eastern Mediterranean,” he added.

Described by the late Israeli President Shimon Peres as the “foreign minister of the Jewish people,” Harris has been decorated by foreign governments more than any other Jewish organizational leader in American history. In addition to Cyprus, he has also been honored, in some cases multiple times, by the governments of Azerbaijan, Belgium, Bulgaria, France, Germany, Greece, Italy, Japan, Latvia, Moldova, Poland, Spain, and Ukraine for his international efforts in defense of human rights, advancement of the transatlantic partnership, and dedication to the Jewish people.