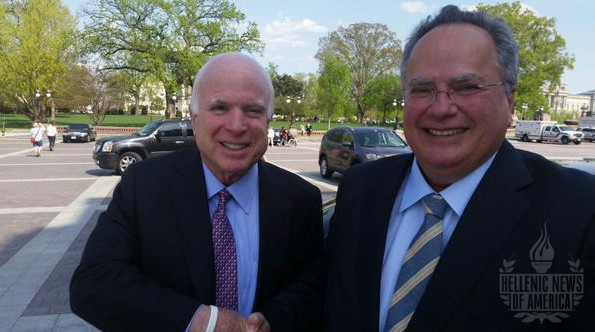 Greece and Albania agreed on Monday to create a road map to resolve all outstanding issues dividing the two neighboring countries.

The agreement was made during an official visit by Greek Foreign Minister Nikos Kotzias to Tirana, which, however, was marred by protests by several hundred supporters of the Party for Justice, Integration and Unity, who skirmished with police during a rally to demand compensation for members of the Cham community who were expelled from Greece during WWII.

Greece has long claimed that the Chams living in Greece were Nazi collaborators.

Despite the tensions outside the Foreign Ministry building, Kotzias and his counterpart Ditmir Bushati struck a conciliatory tone, saying that stronger bilateral ties are in the interest of both countries.

Apart from the Chams, other issues dividing the two countries include Albania’s treatment of its ethnic Greek minority and an unresolved maritime dispute.

Previous articleHAGIA SOPHIA PETITION
Next articleWe will be changing our name from Unifrutti of America, Inc., to Tastyfrutti International, Inc.