CommunityWe are very excited to invite you to our upcoming event on...
CommunityGreeceCultureFeatured 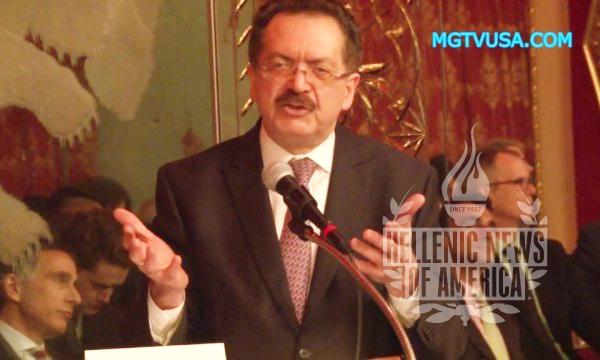 The New York Chapter of the American Hellenic Institute

Greetings friends. The season is packed with wonderful events (including our Christmas party at wonderful Kellari Taverna on Dec. 12 – You MUST RSVP to [email protected])  but we know many of you will be interested in this panel discussion on the incomparable (and endangered) Aghia Sophia presented by EMBCA, which was founded by our AHI – NY president Lou Katsos.

Let us fill you with food and drink Monday and nourish your mind and soul on Tuesday,

“Solomon, I have surpassed thee!”
– Flavius Petrus Sabbatius Iustinianus Augustus (AKA Justinian I), upon first entering and seeing his completed patriarchal cathedral.

This December marks the One Thousand Four Hundred and Seventy Ninth (1,479th) anniversary of its inauguration by the Emperor Justinian I. Born out of the fires and unrest of the Nika uprising in Constantinople, this magnificent structure was inaugurated just 5 years and 10 months after construction commenced. The 20th Century historian and Philhellene Robert Byron, maintained that the greatness of Byzantium lay in what he described as “the Triple Fusion”: that of a Roman body, a Greek mind, and a mystical oriental soul. The same can be said for Aghia Sophia, for it was soon after its inauguration, that this building was perceived far and wide as a unique and crowning achievement of The Eastern Roman Empire.

Aghia Sophia over its long history, has been an Orthodox Patriarchal Cathedral, Catholic Church, Mosque and Museum. More than any other building which has survived from late antiquity, it symbolizes the crossing and meeting of religions, cultures, empires, civilizations and regional hegemons. 1,500 years after its dedication, it has transcended its original function as cathedral, and transformed into both a celebrated and contested symbol emblematic of the history of the Eastern Mediterranean.

We thought it fitting to honor and remember the anniversary of this inauguration by having a panel discussion which will examine the architectural, cultural, historical and geo-political impact that Aghia Sophia has had.

Our evening will commence with an introduction by EMBCA President and Founder, Lou Katsos. John Fotiadis, Vice President of EMBCA, and an Architect with a keen interest in history, will then moderate and participate in a panel consisting of author Alexander Billinis, journalist and commentator Constantine “Dean” Sirigos, and composer Billy Chrissochos. The panelists will give brief presentations and then participate in an open discussion.

This event is being held in association with the New York Chapter of the Hellenic American Institute (AHI) and AHEPA Delphi Chapter 25 of Manhattan.

We hope you will join us for what promises to be a very stimulating evening!