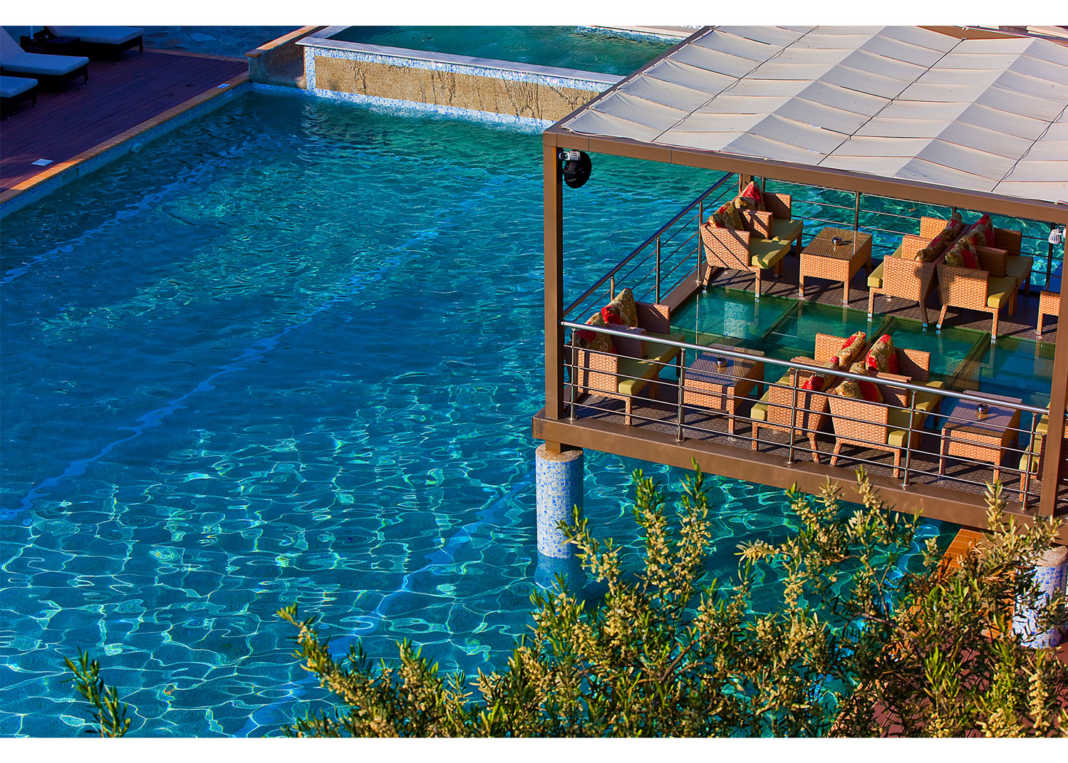 I doubt if there is a more charming mother and daughter team in Halkidiki’s hospitality industry than the most congenial Evi Nikolelou and her lovely daughter, Eleni.  My odyssey through Northern Greece took me to their hotels and my reward was a triple treat—a visit to both hotels, introduction to the famous Loutra Spa with its healing waters, and a lunch at their seaside restaurant, Asterias, which I can say with all honesty was the best meal I have ever had in a seaside tavern in all of Greece.  Kudos to Mrs. Nikolelou and Eleni, and a gracious bow to the talented chef.

We met at the Flegra Palace Hotel in cosmopolitan Pefkochori. My host, who asked me to call her Evi, founded the Palace in 1989 with forty-three rooms and, after two extensive renovations, it now offers eighty-two rooms.  The second hotel is Flegra Beach, located on Pefkohori Beach. The hotels are ideally located close to each other on the beautiful Kassandra Peninsula.

My “day-to-be-remembered” consisted of an initial tour of Flegra Palace, followed by a visit to the renowned spa, and a fitting end at Flegra Beach with the splendid lunch by the sparkling waters of the Aegean Sea.  A triple treat, indeed. A day not only to be remembered, but cherished.

Flegra Palace is 150m from a soft sand beach in Pefkohori and 500m from a Village where one finds many restaurants, bars, and shops .The Makedonia (SKG) airport is about 100 kilometers away.  I was guided through the completely renovated, four-star hotel.  It offers eighty distinctive room and its amenities include a lovely swimming pool and the “Soleil Bar,” next to ‘Titanes,” a garden restaurant In a lush setting that invites relaxation. Coffee and cocktails are prepared throughout the day at Soleil bar, next to the pool, the focal point of the attractive complex.  I imagined myself relaxing by the pool, ordering afternoon tea and then an evening dinner and never leaving. It is that inviting.  For guests who desire leisure facilities, however, there is a beach volley court, table tennis and LCD satellite TV, a playground and hot tub.

The Ambrosia Restaurant overlooks the pool and it is here where guests indulge themselves with delectable dishes inspired by the “Mediterranean Greek diet.”  For accommodations, you may choose bungalows surrounding the property or executive rooms and suites in the main building. All are tastefully furnished and designed to promote tranquility and relaxation.

Flegra Beach Hotel is ideal for the guest who wants to be “on the beach.”  And what a lovely beach it is. The hotel is brand new and opened in 2014. It consists of three buildings on two floors with access by elevator. There are twenty-nine apartments, including spacious rooms and suites, the “Starfish” beach bar, and the splendid Asterias beachfront restaurant where I had that famous best meal.  When I am on the islands in Greece, I always choose to dine as close to the sea as possible and dining at the Asterrias was exactly like dining on an island with the beautiful sea views before me.  Perfection.

Ideally located on the beachfront on the beautiful Kassandra Peninsula, Flegra Beach Hotel is a mere 300m from Pefkohori shopping center.  Also, there are a number of attractions within easy driving distance of both hotels and the two most famous are the Thermal Baths of Loutra and the Petralona Cave, one of the wonders of Halkidiki.  Bejeweled with stalagmites and stalactites, it is nestled on the western side of the limestone Katsika Mountain, 700m in height and 300m above sea level. The cave became internationally known when the fossilized skull of Petralona man was found by a group of six men (three of them scientists), guided by a villager.

The day ended with a visit to the Spa Thermal Baths of Loutra.  I would not have been able to easily find my way there through the mountainous roads and it is a testament to the gracious hospitality of my two hosts, Evi and her daughter, Elena, that I had the privilege of visiting the thermal waters.

The Village of Loutra, is on the west seaside of the Kassandra Peninsula, in a lush pine forest.  It is located approximately 57km from Paralia Dionislou Beach, and it can be reached from main roads, but in order to give me views of the lovely countryside, Evi drove through winding, rural roads where scenes of pastoral beauty were beyond each turn.

The springs, discovered accidentally sometime after World War II, have important therapeutic qualities due to the water’s special chemical composition. First discovered by a farmer, who was looking to sprinkle sulfur on the vines, residents became aware of the healing quality of the waters because of their high sulfur content.  (The strong, unmistakable smell of sulfur is apparent as soon as you enter the facility and even before entering.) When residents decided to see if they could release the waters they blasted the rocks with dynamite and precious, hydrosulfide water at temperatures of 39C gushed forth, as from a volcano. The result was a healing combination of sulfur and seawater and a therapeutic Spa was born; it was first named St. Nicholas and then Agia Paraskevi.

It has to be one of the most reasonably priced spas in all of Greece.  Most treatments cost between five and nine euros and include a hydro massage in the hot, sulfur springs; warm and soothing baths in personal tubs; a Turkish steam bath; dry steam sauna; a swim or soak in a pool of curative water; and a luxurious, sixty minute sauna-hydro massage.  The “taking of the waters,” as the treatments are commonly known, promote revitalization and relaxation and a provide relief from a vast array of medical conditions, (the Spa lists sixteen), ranging from osteoarthritis and rheumatoid arthritis to tendinitis, psoriasis, and urologic and gynecologic disease.

I did not have time to sample the spa treatments, but I took the literature and stored it with all the information I collected on Flegra Palace and Flegra Beach hotels.  The information will be at my fingertips when I am fortunate enough to plan my next visit there.

For detailed information on both hotels, please visit www.flegra.gr, and for information on the Spa, visit http://dionisiou-realestate.com/pages/SPA-center_in_Loutra_Halkidiki/

ABOUT THE AUTHOR:  Aurelia is a free-lance writer and the author of A Lone Red Apple, a novel set on Mykonos, Delos, and Rhinia.  Her second novel, Labyrinthine Ways, is set on Mykonos and Crete.  She writes for The Hellenic  News of America and for a variety of travel publications.  She is currently working on a third novel set on Rhinia, a magical, barren island near Mykonos. Her articles can be found on www.sweetspotsofgreece.blogspot.com

Photos courtesy of the hotel