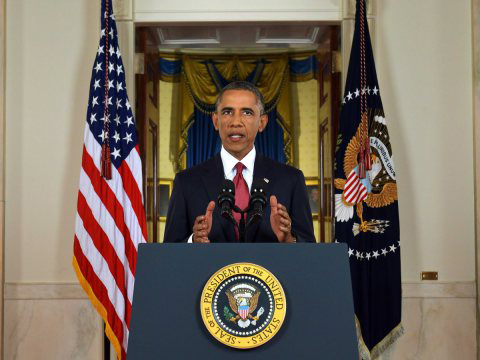 This week, the House and Senate considered measures concerning the Armenian American community. Congress was expected to pass a Continuing Resolution (CR) to avoid a government shutdown on September 30th, when current funding is set to expire. However, after President Obama’s primetime address on September 10th calling for the arming of Syrian rebels, the House voted on a measure to do just that and attached it as an amendment to the CR, setting up a complex and very interesting pattern of voting.

According to several interviews with Armenian American community leaders across the United States, an overwhelming majority support US airstrikes against ISIL. However, they do not support President Obama’s call to train and arm Syrian rebel factions, especially in the wake of the Turkish-backed rebel assault on the Christian Armenian town of Kessab, Syria earlier this year.

Everyone else stood with President Obama in supporting the amendment to arm Syrian rebels and for the CR.

While it is clear that Armenian Americans support the President’s vow to “destroy and ultimately defeat ISIL,” they are wary of training and arming Islamic rebel factions with known ties to al-Qaeda and that have a record of attacking Christians just like ISIL.

Florida Armenians have an important role to play in this debate. Many Armenian American families in Florida emigrated from Syria, mostly descendants of the 1915 Armenian Genocide. Some still have relatives there. They are uniquely familiar with the regional dynamics and can provide critical insight into what groups truly respect and protect and respect religious minorities, be they Christian Armenian, Assyrian, or Yezidi.

On Wednesday, the Senate voted 98-0 to confirm John R. Bass as the next U.S. ambassador to Turkey. Senate Foreign Relations Committee Chairman Robert Menendez (D-NJ), and Senators Barbara Boxer (D-CA), Mark Kirk (R-FL), and Ed Markey (D-MA) submitted to the nominee questions on the Armenian Genocide and Turkey’s blockade of Armenia. “We commend Chairman Menendez, and Senators Barbara Boxer, Mark Kirk and Ed Markey for their stance on issues concerning Turkey’s denial of the Armenian Genocide, the Turkish-Azerbaijani blockade of Armenia, and other critical issues affecting the region,” stated Armenian Assembly of America Executive Director Bryan Ardouny. “Following in the footsteps of Henry Morgenthau, the U.S. ambassador to the Ottoman Empire who in 1915 alerted the world to the Armenian Genocide, it is important that our Foreign Service officers execute a foreign policy that appropriately reflects America’s values,” he said.

Also on Wednesday, the Senate Foreign Relations Committee heard testimony from President Obama’s nominees to be the next U.S. ambassador to Armenia and Azerbaijan, Richard M. Mills and Robert F. Cekuta, respectively. Both are expected to be confirmed by the full Senate sometime during the lame-duck session, which is scheduled to begin on Wednesday, November 12th.