Fort Roupel, 1914, was in early planning stages along the mountainous border between Greece and Bulgaria when World War I erupted. In the mid-1930’s that war’s Macedonian Front was transformed by Prime Minister Ioannis Metaxas into a 200-kilometer line of 21 state-of-the-art fortifications. World War II, April 1941, the German and Bulgarian armies attacked all 21 forts on the Metaxas Line with overwhelming force – Fort Roupel was outnumbered (and out gunned) 7 to 1.

I had just crossed the Bulgarian border at Kulata into Greece traveling from the resort town of Bansko through the beautiful mountains of Pirin National Park into Central Macedonia. Sofia Bournatzi, and her father, Theodoros, greeted me in Promachonas on the Greek side. I couldn’t have had more knowledgeable guides since the region has been the Bournatzi family home for generations.

I was told we’re on our way to Fort Roupel. The fortress has a hallowed World War II history. So why was I being taken to a major World War II site when my assignment was to focus on World War I’s Macedonian Front?

As our guide at Fort Roupel – a young, English speaking, university educated, Greek Army Private – explained the surrounding geography I clearly could see Kulata where I’d crossed the Bulgarian/Greek border just an hour before. It struck me that our guide would be within similar age of my late uncle Leo who, in 1915, fresh out of university in Canada, perished in the carnage of Ypres, France. For the journalist the visit started feeling personal.

Fort Roupel was part of the First World War’s Macedonian Front. That “war to end all wars” was supposed to have made the border “permanently” safe. Yet the forces of Germany, Bulgaria and their allies would invade Greece in both wars. At Kulata some decades later I was just one of many tourists crossing the Bulgarian-Greek border to enjoy the sea and mountains of these NATO/EU allies.

Fort Roupel was a key fortification because at a 322-meter elevation (1,056 feet) it guarded routes that for centuries had provided trade access to the port of Thessaloniki, capital of Macedonia. At a short distance was the narrow Roupel Gorge through which the Strymon River flows North-South connecting Sofia, capital of Bulgaria, with Central Macedonia. This has been a traditional link between the two nations and a fast route for invaders.

Greece started construction on Fort Roupel in 1913 as part of fortifying a strategic 200-kilometer (125 miles) long border of mountainous terrain with Bulgaria. (There was a long history of enmity between the two countries). But with the outbreak of war in 1914 little of the present fort, with the exception of a few of the surface buildings, existed until the mid-1930s.

Although the Macedonian Front, the military designation for the border region, generally prevented significant invasions during the war it was affected by political chaos embroiling Greece in 1916, which led to the “National Schism” – a rupture in the power balance between the Monarchy and Parliament. But this internal turmoil energized the Allied/Greek forces and by the end of 1917 neither Germany nor Bulgaria were in a condition to invade Greece.

Growing political tensions in Europe by the mid-1930s prompted Prime Minister Ioannis Metaxas to restart the construction of 21 state-of-the-art, largely underground, fortifications along the Macedonian Front. All the forts on the renamed Mataxas Line were to have been connected by one continuous underground tunnel but construction stopped in 1940 with the outbreak of World War II.

Fort Roupel was the largest. It had 143 hidden fortified positions interconnected with underground tunnels radiating from the central bunkers. The mountain was so thickly forested that except for a few surface buildings Fort Roupel was invisible.

The Fort’s underground bunkers were built to accommodate a garrison of 3,000 for up to three weeks stocked with all supplies, air and water filtration systems and electric generators (although most interior illumination was by kerosine lamp – quieter). The bunkers were sealed by doors specially designed by the Greek Navy. Camouflaged entrance doors led to the surface, and interior doors could seal off sections of the bunker tunnels in case of a successful enemy intrusion.

In the Heroic traditions of Greece

By April 1941 a combined German/Bulgarian army had amassed along the entire 200-km Mataxas Line. General Wilhelm List, German commander, was confident that his superior air and tank power would smash through Greek defenses at Fort Roupel with few problems. He had every reason to feel confident: 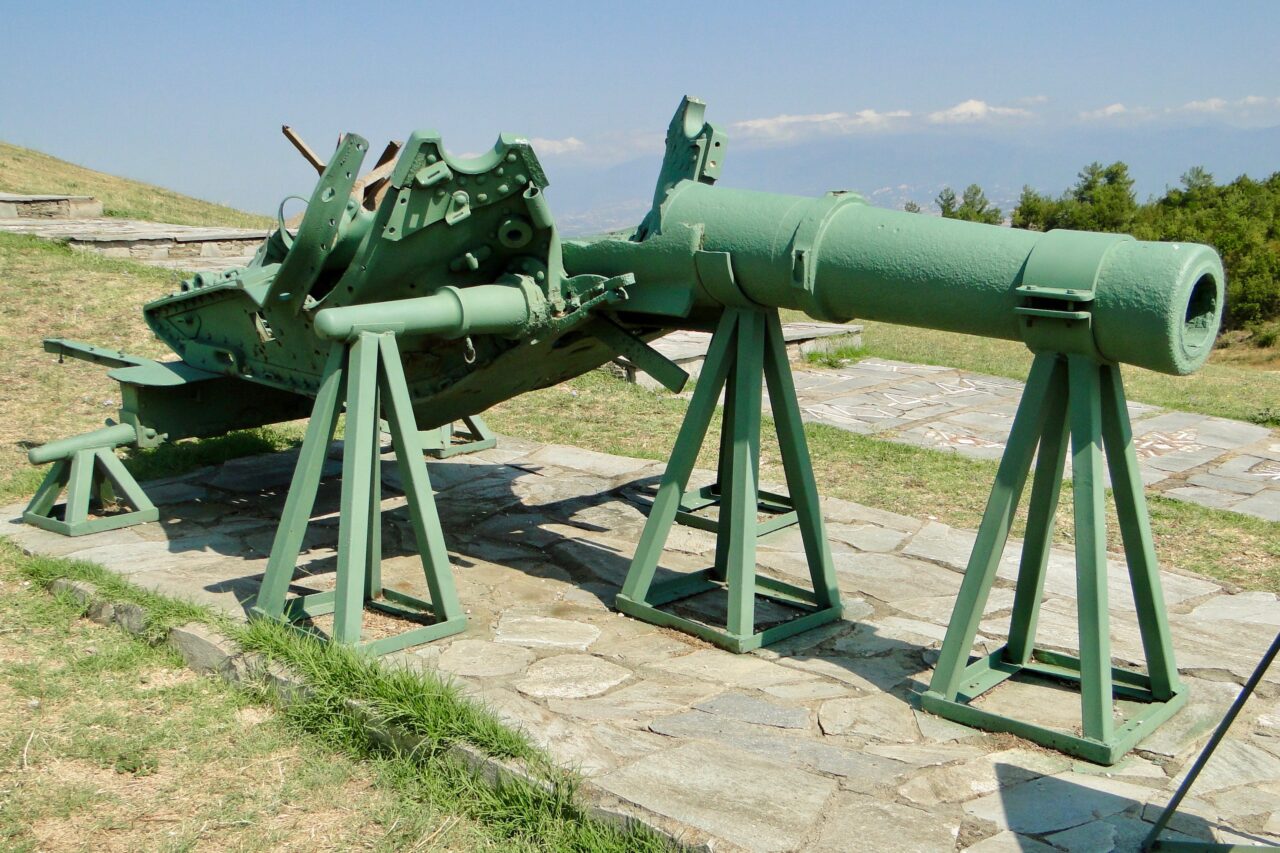 6 April 1941 Heavy German artillery bombardment started at 5:00 a.m. followed by bombing raids by Luftwaffe aircraft. Only five of Fort Roupel’s fortified postions and surface buildings were unavoidably visible from the air. The German’s were perplexed considering the heavy return fire they were receiving, but they could not see from where?

To complicate matters, in what the German’s thought would be an easy route while the Fort was distracted by battle became a disaster. A German invasion force of 18 rubber boats started making their way down the Strymon River but were stopped by the underwater barbed wire installed by the Greeks. The Germans were forced to retreat under heavy fire from the Fort. The day ended with German and Bulgarian forces dazed.

7 April 1941 Realizing through reconnaissance the Greeks had no aircraft, anti-aircraft artillery or tanks, the Luftwaffe dived low and relentless. What the Luftwaffe pilots were not aware were the hundreds of Greek eyes and riffles trained on the aircraft from their hidden positions. The pilots could not make out the artillery locations even though reports from Greek soldiers said the aircraft were so close to the ground the faces of the pilots were distinguishable. The air battle failed to silence the Fort simply because it could not be seen.

8 April 1941 The German Command, frustrated by the resistance of what they expected to be a simple invasion through the Roupel Gorge, ordered tank divisions moved east and broke through the less defended Yugoslavia and Greek borders while the Mataxis Line battles continued. Thessaloniki fell but with communication down Fort Roupel did not receive the news.

General Wilhelm List demanded Fort Roupel’s surrender while commenting on Greek Commander Lieutenant Colonel Georgios Douratsos and the garrison’s extraordinary resistance and bravery. But the demand to surrender was rejected. In a response that every Greek school child now memorizes, Georgios Douratsos said, “Forts cannot be given away they can only be conquered.”

The Greeks would continue resisting despite the Metaxas Line being surrounded by German forces and the occupation of both Thessaloniki and Athens. Fighting continued until April 23 upon the surrender of Greece.

In an unprecedented display of admiration for the heroic resistance of Fort Roupel, General List took no prisoners (not the case at other forts) and declared that the garrison was free to leave with their war flags on condition that they surrender their arms. He also ordered his soldiers and officers to salute the departing Greeks.

Crossing a border sends a travel writer into overdrive. The same for an invader. The drive to cross may be different and so will the border over time. Yet that never diminishes a fluid human factor of what a border represents and its effects on life.

When you go: If you wish to request an English speaking guide arrange to call Fort Roupel before you visit (+30 2321 095100).  Fort Roupel is still an active Greek Army base and all guides are soldiers. There are no fees to visit. Allow at least 2 to 3 hours for the guided tour, which includes the underground bunkers (a virtual living museum), time in the Fort Roupel Museum and exploring the grounds.

Special thanks to Sofia Bournatzi of Pass Partout DMC , Visit Central Macadonia and Thessaloniki Tourism Organization for facilitating my stay.