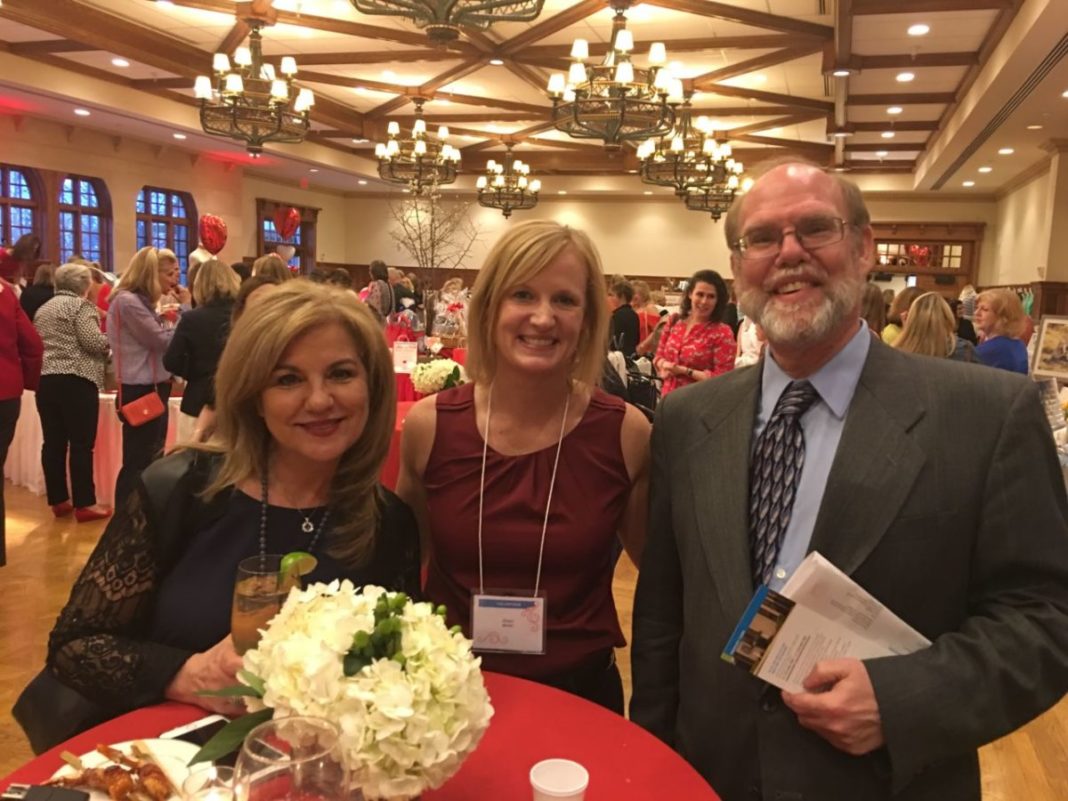 It was ladies shopping night as guests strolled through the ballroom of the Aronimink Country Club, checking out the luxury products from more than 18 local artisans, boutiques and businesses. Guests were treated to light food and drink, as they gathered amongst red heart-shaped balloons and decorations.

“If you have a graduation gift, a mother’s day gift, wedding gift, shower gift, something on your bucket list, this is a great place to shop and you’ll be supporting the Women’s Heart Initiative  as you do so,” said the evening’s guest emcee,  Caroline O’Halloran, editor-in-chief of SAVVY Main Line.

The women were there for a good time, but there was a lot more going on than just a fun night out.  The Women’s Heart Initiative made sure that guests left with several key messages: Recognize their risks for heart disease. Learn about heart attack symptoms women experience. Act right away when you have any of those symptoms.

Educating women is an important mission.  Statistics show heart disease as the leading killer for women, with one in three dying of heart disease.

“More women die of heart disease than if you combine all the women dying of cancer,” said Dr.  Maribel Hernandez, MD, medical director of the Women’s Heart Initiative for Main Line Health. “Close to 400,000 women die of cardiovascular disease a year. Around 40,000 die of breast cancer a year, so it’s truly the number one killer of women.”

“Breast cancer is everywhere but you don’t hear many people promoting this heart disease issue and more women are dying of heart disease than breast cancer,” said Carol Cutler, a heart attack survivor from Lankenau who chairs the fundraiser.

Education was mixed in with the shopping at the Wednesday night event.  Women heart attack survivors mingled with guests, eager to tell their story.  Some of Main Line Health’s 13 women cardiologists chatted it up with anyone who wanted to hear about the risks of heart disease for women as well as the medical options available to treat them. Guests could stop at a table and learn about their own heart risks.

Heart attack symptoms for women are different than those for men.  Although women can have chest pains during a heart attack, many do not. Symptoms instead can include indigestion, shortness of breath, backache, fatigue and nausea. Victims may get some or all of the symptoms and they may occur at different times, so they are often easy to explain away.

“A lot of times women tend to ignore them,” Cutler said. “So what we’re finding is more and more is when women have symptoms they tend to push them off and say ‘I’m OK, I’m fine’ and they don’t put themselves first.”

The goal is to convince women that if they are symptomatic they should do something about it.

Funds raised at events like Paint the Town Red are used to help those who can’t afford it, pay for heart health risk assessment screenings.  Benchmark tests to see if you’re at risk for heart disease usually aren’t covered by insurance, Cutler said. Funds also go to educating women in the community about the risks of heart disease through community talks and programs with primary care physicians and specialists like gynecologists and obstetricians.

“We’re starting to work together to educate the women that they see, to recognize the symptoms of heart disease,” said Dr. Hernandez.

Every year draws more people to events like Paint the Town Red.  Cutler estimated about 200 people came to the April 5 shopping fundraiser.  The Initiative does a second event at Lankenau in November, when five female cardiologists head up an educational panel.

Traditionally, heart disease has occurred in older women, after menopause, but cardiologists are seeing younger women with heart disease.

“We’re seeing more women presenting [symptoms] in the late 40s, early 50s.This is at a time when a lot of women don’t think they have heart problems,” Dr. Hernandez said. They end up delaying their care making the situation worse because there is more damage to the heart.

“Most people are familiar with cholesterol, high blood pressure, cigarette smoking as risk factors but women have these additional risk factors that I mention and many times they are at risk and they are not even aware of it,” she said.

One of the issues with women and heart disease is that a lot of the research has been focused on men,” she added, so there isn’t as much available data.

“They have a heart problem and they delay the care, even though they might call 911 for their husband, when it comes to them, they try to minimize, they don’t want to cause problems,” Dr. Hernandez said.

For heart attack or stroke victims, heart damage can be minimized if doctors can open up the blocked artery within two hours of the initial attack. The Main Line Health System actually has a system in place to make sure arteries are opened within 90 minutes of a patient reporting an attack.

“The whole system is timed to do everything in that window,” Dr. Hernandez said.  “So right now, if you are having chest pains, you need to call 911 immediately and that activates the system.”

Sue Lawhead knows first-hand about the perils of ignoring heart attack symptoms.  She almost didn’t make it to her 70th birthday after suffering multiple heart attacks.

“I always say the best byline is ‘cardiac arrest at 69, jump out of an airplane at 70,” the Chesterbrook woman joked.

Lawhead described herself as “perfectly healthy”, though there was a history of heart disease in her family.  She took no medication, didn’t smoke, didn’t drink and wasn’t’ sick. She had been getting an annual physical, though she stopped for three years when her doctor retired.

She started using food as a way to cope and had already been a yo-yo dieter all of her life. Constantly losing and gaining back weight puts a tremendous strain on your heart, she explained.

Lawhead had symptoms but they were easy to explain. She had back pain, but she was doing Christmas decorating, lifting and carrying boxes at the time. She had shortness of breath and fatigue in her jaw.

“The symptom that got me the worst was the indigestion.  It was the worst pain I’d ever had,” she said.  She figured it was indigestion because of all the garbage she was eating.

“That’s why my jaw hurt, don’t you know. Even today it still makes perfect sense,” she said.

That’s why it’s so important for women to find out the symptoms of a heart attack, especially if you have a history of heart disease in your family.

The pain from the indigestion got so bad at one point she agreed to go to the hospital.

“I still never connected it to my heart. I even had the nausea,” Lawhead said.

She ended up arresting at Paoli, waking up five days later at Lankenau Hospital. They were eventually able to put three stents into her right coronary artery.

Two weeks later she was back home, than spent a week at the Bryn Mawr Rehabilitation Center getting her post-heart attack life back on track.

“I know I’m here by the grace of God and the people, the expertise of the people that He had there for me. All those things, I know I’m very blessed,” she said.

Her heart health improved significantly thanks to a prescribed exercise and diet program, to the point where she was able to sky dive a year later, after getting a skydiving recommendation from her cardiologist.

“What I want to try and get across to women is you have to make sure that you’re in the best place, mind, body and spirit before you run out and try and help the world. If I had been, perhaps I wouldn’t have put my family through the trauma and angst that I did.  If we don’t then that’s possibly what you’re going to put your family through. And that’s not OK,” she said.