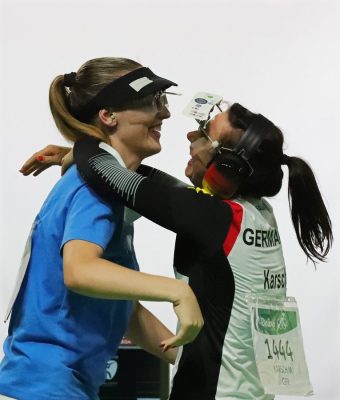 It is the second medal won by the young champion from Drama, in the most unexpected success of Greece in the last 20 years. Since Pyrros Dimas and Voula Patoulidou “sprang” and gave our country two gold medals in 1992 in Barcelona.

The 20-year Korakakis made history as it became the first in 100 years to win two medals in the same event. Last were Constantinos Tsiklitiras 1912 in Stockholm. It is also the first gold medal of Greece after twelve years, since both in Beijing (2008) and London (2012), our country was reduced to silver and bronze.

The silver medal was won by Swiss Heidi Gerber who defeated the Chinese Zhang 8-4 in the match for 3rd place.

How qualified for the final

The Greek champions with new stunning appearance in the semifinals, took first place with 19 targeted efforts and the ticket to the final of the event where a rival German Monica Marsh.

The gold medal Korakakis is the first for the Greek colors in the Olympic Games since 2004 and the organization of Athens. Then on the highest step of the podium had risen Athanasia Tsoumeleka and Fani Halkias the arena, the Thomas Bimis and Nikolaos Siranidis in synchronized diving, Demosthenes Tabakos in Gymnastics, Sophia Bekatotou the Emilia Tsoulfa in Sailing and Ilias Iliadis Judo.

The first with two medals from 1912

With today’s success, the Korakakis Anna came in and in a particularly “a lean ‘club, that of the Greeks gained more than an Olympic medal in the same event and the first that succeeds from 1912.

Kostas Tsiklitiras was the last to have achieved in 1908 and 1912. They were preceded in 1896 John Orphanides shooting, Stamatis Nikolopoulos in cycling, Dionysis Kasdaglis tennis and Sotiris Versis to athletics and weightlifting.

Three medals in the same event in 1896, had taken John Frangoudis shooting and Stathis Choraface swimming.

Previous articleThe under construction Leounes/ Laconian Museum at UCONN
Next articleOn the Trail in Greece: The Mycenaean Civilization at the National Archaeological Museum of Athens