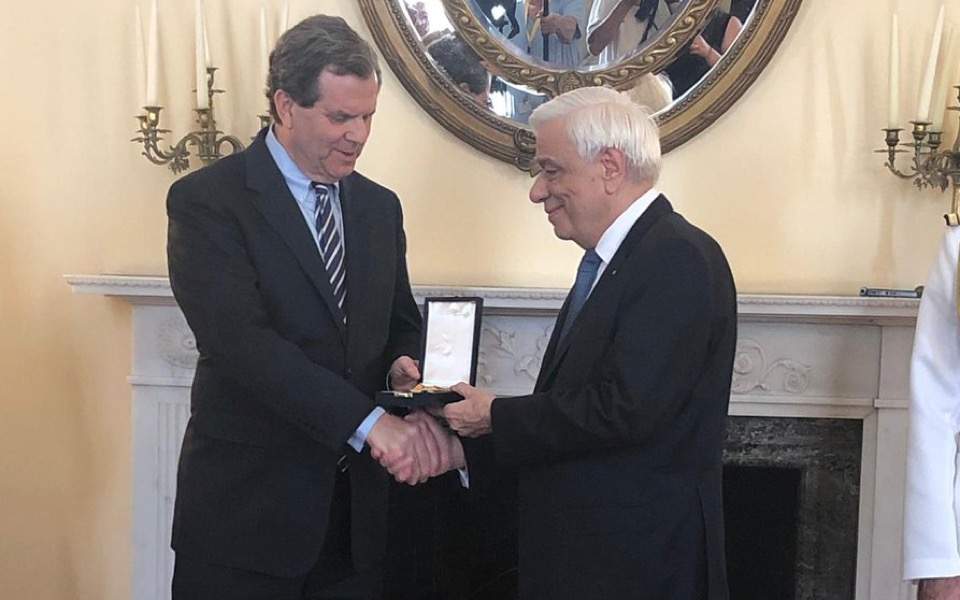 American Jewish Committee (AJC) CEO David Harris was honored today by Greece with one of the country’s most prestigious awards, the Order of the Phoenix.

“I award to you, with deep feelings of honor, the Commander of the Order of the Phoenix. As CEO of American Jewish Committee, and on the basis of the legacy of the Holocaust, you have defended human rights around the world and you have defended the dignity of humankind, so that we can all now say, effectively, never again,” said Greek President Prokopis Pavlopoulos, who presented the award to Harris in recognition of his long-term engagement with Greece on behalf of AJC.

“The second reason for this award is the fact that you have made a critical contribution to strengthening relations among Greece, Cyprus, Israel and the U.S., which are now at their best, and, with your help, they will only continue to improve.”

Harris has visited Greece dozens of times, beginning in the 1980s, meeting regularly with the country’s prime ministers and other top officials in Athens, as well as in New York and Washington, D.C., to advance Greece’s interactions with American Jews, Israel and the United States.

“With a long and rich history, and geographically significant, Greece today is playing a vitally important role in the Balkans and Eastern Mediterranean region,” said Harris. “Strengthening Greece’s ties to the U.S., Israel and other allies is of paramount importance.”

Harris’s vision and diplomatic efforts have been credited by regional officials with nurturing close trilateral relations among Cyprus, Greece and Israel. AJC also has forged cooperative relations with the Hellenic-American community, including the Hellenic American Leadership Council (HALC).

Harris has pursued this while also working with the Jewish community in Greece and Greek authorities to ensure that the memory of Greek Jews who perished in the Holocaust is preserved and honored. Eighty-seven percent of Greece’s pre-war population of 80,000 were deported and murdered by the Nazis. The Central Board of Jewish Communities in Greece (KIS) is an AJC international partner.

Described by the late Israeli President Shimon Peres as the “foreign minister of the Jewish people,” Harris has previously been honored by the governments of Azerbaijan, Belgium, Bulgaria, France, Germany, Italy, Japan, Latvia, Moldova, Poland, Spain, and Ukraine a total of 16 times for his international efforts in defense of human rights, advancement of the transatlantic partnership, and dedication to the Jewish people.