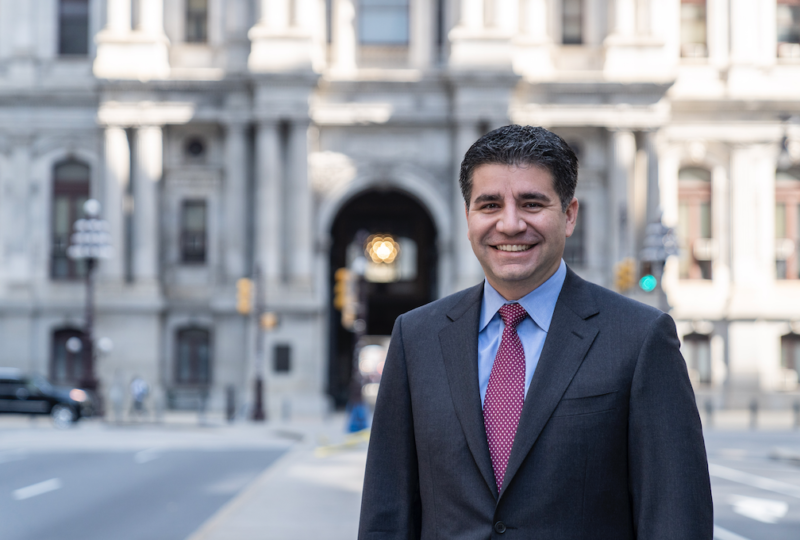 As Anthony Kyriakakis campaigns for Philadelphia Common Pleas Court Judge, he brings the wisdom of the ancient Greeks with him.

“I was interested in the ideals of justice that were described by our ancient Greek philosophers,” says Kyriakakis, a Greek American. “I seek to serve as a judge because of those ideals of fairness and justice.”

Kyriakakis is one of 27 candidates running for judge in the May 21 primary election, but was one of only two who received the Philadelphia Bar Association’s top rating of “Highly Recommended.” The rating goes to those who “possess a reputation for utmost integrity, and significantly will enhance … the quality of the judiciary,” according to the Bar Association’s ratings criteria. Kyriakakis thinks they appreciated the experience he could bring to the job.

Besides 18 years as a trial lawyer, he has also been a federal law clerk, civil litigator, a federal prosecutor for eight years with the U.S. Attorney’s Office in Philadelphia, a criminal defense attorney and a law professor at Temple and Penn law schools.  He’s focused on vulnerable victims and low-income defendants.

Fairness for all is an important part of his desire to be a judge. “I’m running because I want to devote the rest of my career to protecting the rights of the residents of our city and making sure everyone is treated fairly with dignity and respect,” he says.

Every day, judges are making life-changing decisions; separating defendants from families and communities for years, separating parents from their children. 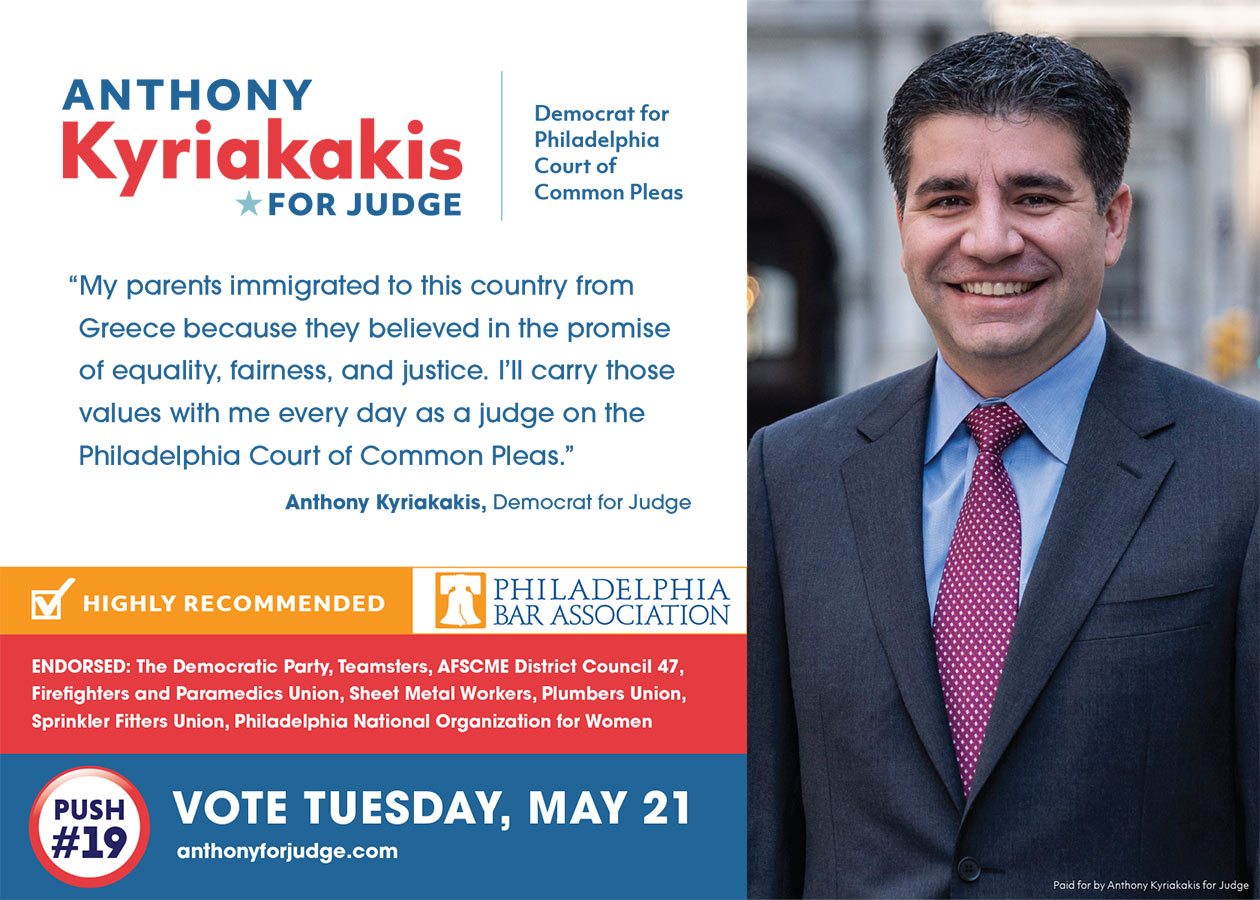 “As a judge, I would serve an important role to ensure that every single party, whether it’s a defendant or a victim in a criminal case, or a plaintiff or defendant in a civil case, gets a fair shake and all parties are treated fairly,” he says.

He’d like to work with other judges to put reforms in place guaranteeing fair and equal treatment for everyone, regardless of race, gender or socioeconomic status.

Kyriakakis picked up his desire for public service from his immigrant parents. “I was the son of two Greek immigrants who came here with little more than a suitcase but then got very involved in our community,” he said. His father was on the parish council at St. Barbara’s Church in Toms River, New Jersey and a member of AHEPA. His mother was part of the Ladies Philoptochos Society. Kyriakakis joined G.O.Y.A. (the Greek Orthodox Youth Association), eventually becoming president.

With scholarships from AHEPA, and support from the church community and his parents, Kyriakakis was able to graduate from Yale University in 1998 with a history degree, than go on to Harvard Law School. “That’s what motivates me in part to find ways to give back to the community,” he says. 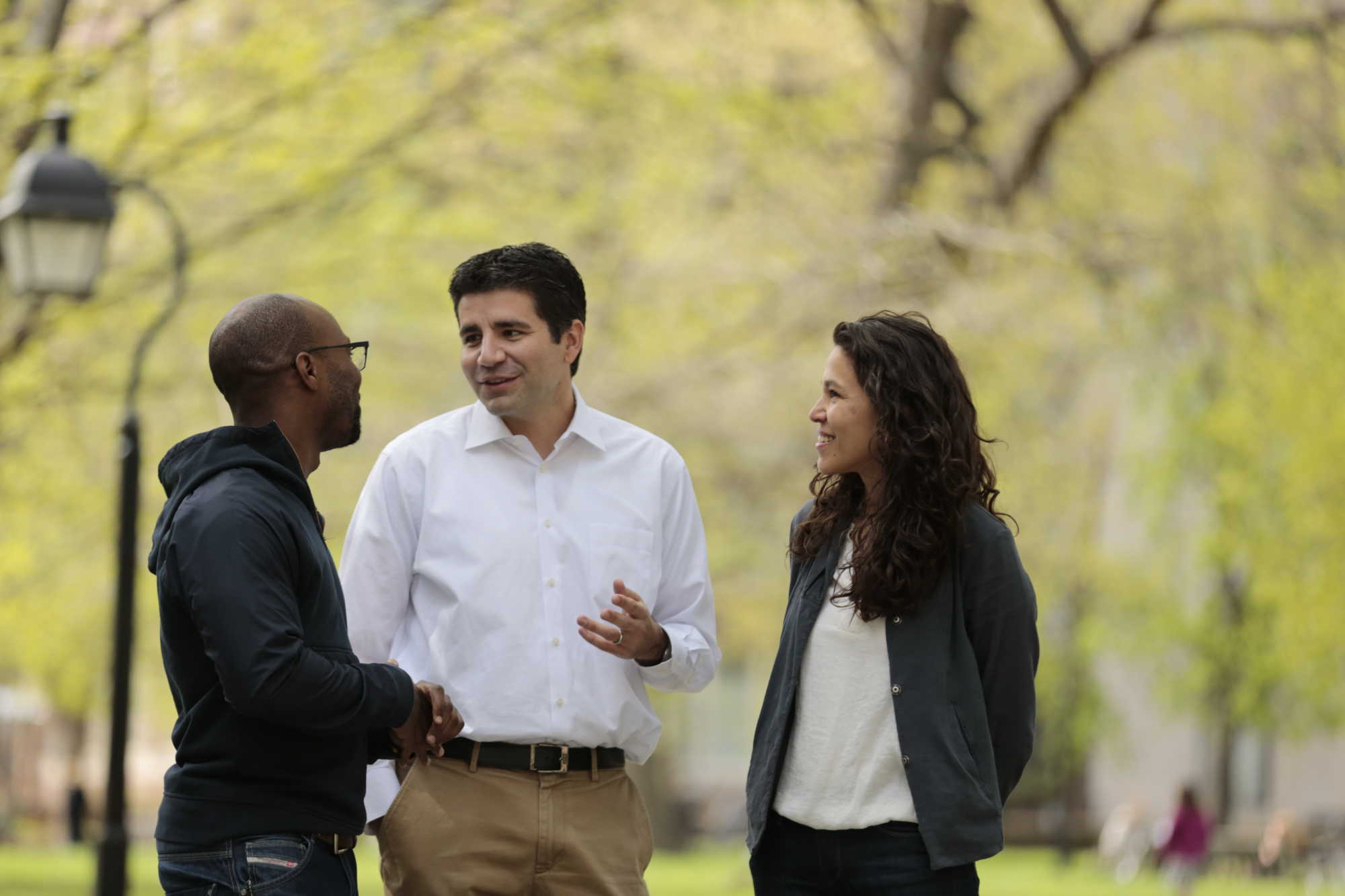 One way he serves is through Big Brother. He’s mentored a little brother for more than seven years and serves on the board as Program Committee chairman.

Kyriakakis has his own children, ages 10 and 7. He and his wife, Aleni, also Greek American, have been married for 12 years living in Philadelphia. His children attend Greek school.

He was born in Livingston, New Jersey and grew up in Ocean County in a town called Brick. His parents came to the United States in 1971. His mother grew up in Pireas, near Athens, while his father was raised in the village of Elika in the southern Peloponnese.  His father joined the merchant marines in his 20s, met and married his mother, before coming to America, where he joined the Teamsters and repaired diesel engines on garbage trucks. His father’s union helped Kyriakakis with a scholarship to Yale and endorsed him for Common Pleas judge.

His mother worked at a textile factory outlet. The woman who had been such a major influence in his life passed away the summer after Kyriakakis graduated law school but was able to share in the joy of seeing her son be the first in the family to graduate college and go to law school. “That was a really great and happy moment for our family,” he says.

His parents never lost sight of their Greek roots and Kyriakakis remembers traveling alone to Greece in the summer to visit his grandparents, aunts and uncles. The lessons he learned there and in Greek school stayed with him.

“I’ve always been proud of the strong ideals that came out of Greece with respect to democracy and justice. “

He’s also fascinated by the Greek immigrants who came to America in the early 20th century and overcame challenges by supporting each other to create opportunities for themselves, and for the generations to come. 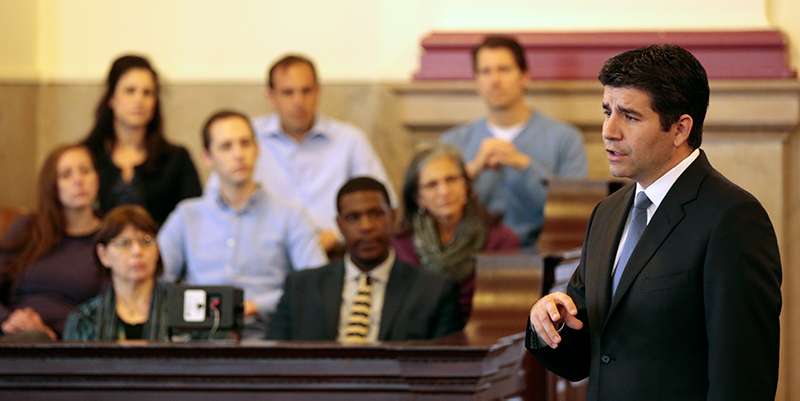 He likes the idea of advocating for others and donates his time to help those who can’t afford legal counsel. He’s a child advocate in family court for Philadelphia’s most vulnerable children, sits on the board of the Center for Families and Relationships in Northeast Philadelphia and is a trustee at the University of the Arts.

Kyriakakis also volunteered with President Obama’s Clemency Project, identifying non-violent offenders for early release from prison.  The U.S. incarceration rate is about the highest in the world, 700 people for every 100,000. “I think it’s important that we, in appropriate cases, find alternatives to incarceration,” he says. Earlier releases mean lower costs and a second chance for non-violent offenders to reunite with families and communities.

In Philadelphia, individuals sit in prison awaiting disposition on probation violations, or because they can’t pay bail. “I believe that someone’s ability to pay for cash bail shouldn’t be what keeps them in prison awaiting trial,” he says.

He’s also concerned about the large number of high-pressure guilty pleas put on defendants to expedite a case.  Over 95 percent of convictions are guilty pleas.  He would work to ensure that every defendant in a criminal case gets afforded their full due process rights.

“Anytime someone is convicted who is actually innocent is one of the worst things that can happen in our justice system and we have to take that problem very seriously,” he says.

To find out more about Anthony Kyriakakis and his campaign for Philadelphia Common Pleas Judge, visit his website at www.anthonyforjudge.com.