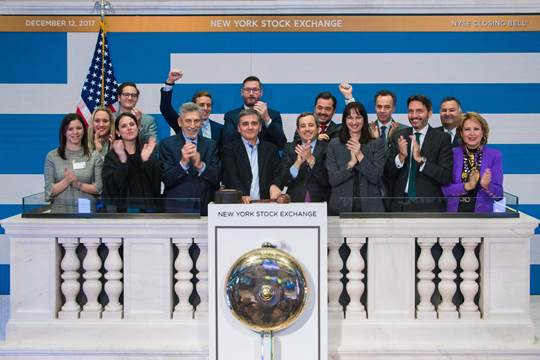 Within the context of the 19th Annual Capital Link Invest in Greece Forum the New York Stock Exchange in cooperation with Capital Link organized a special ceremony in honor of Greece entitled “Greek Day at NYSE”.

The New York Stock Exchange (NYSE) flew the Greek flag on Wall Street and issued special commemorative medals to honor the members of the Greek Delegation.

This year’s “Greek Day at NYSE” featured Greek Government Officials and executives representing companies listed in the US stock markets as well as companies that participated at the 19th Annual Capital Link Invest in Greece Forum, which held in great success the previous day. 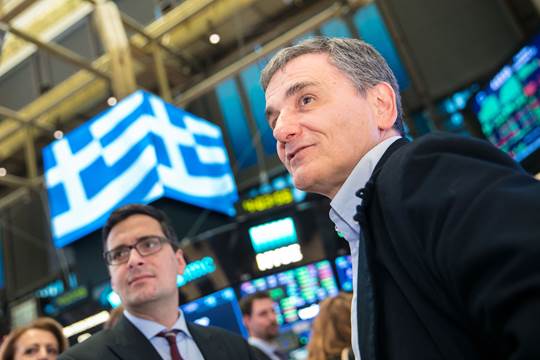 The active support and participation of NYSE, the world’s largest stock exchange, enhances the prestige and the visibility of the Forum and of Greece to a wide international investment audience. It also shows the stable support to Greece, the Greek companies, the Greek shipping industry and the Diaspora.

The Securities and Exchange Commission of the United States of America is a major source of capital for the growing number of Greek interest companies and the NYSE plays playing a leading role in this.

Capital Link is an Advisory, Investor Relations and Financial Communications firm. Besides the customized Investor Relations programs tailored to each specific client, Capital Link is also known for the organization of large scale high quality maritime and investor forums in key industry centers, such as in New York, London, Athens, Shanghai, Limassol and Singapore. Capital Link organizes fourteen conferences annually, of which seven are focused on the maritime sector. Capital Link’s events draw the elite of the financial, investment and maritime communities and provide a unique combination of superior informational content, marketing and networking opportunities. Capital Link’s global marketing platform enhances the visibility and reach of these events during the year on a global scale that lasts well beyond the date on which each event is held, becoming a continuous reference point for market participants.

Capital Link’s efforts have been recognized by the 2011 Lloyds’s List Greek Shipping Awards, in 2012 and 2013 by the InterContinental Finance Magazine and in 2016 by the Wealth & Finance Magazine, Also, by the International Propeller Club of the United States and AHI-American Hellenic Institute.