Greek Grandfather's life lessons are a blueprint to success
Featured

Greek Grandfather’s life lessons are a blueprint to success 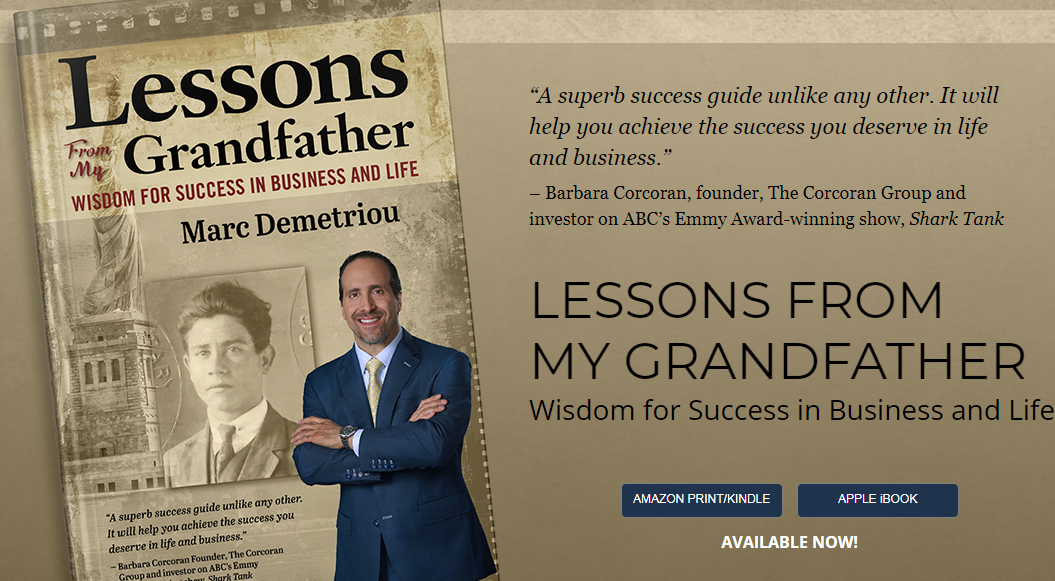 The words of his grandfather reach across time, their meaning resonating as strongly today as when they were first spoken.

“Lessons From My Grandfather: Wisdom for Success in Business and Life” is a new book by Marc Demetriou, a tribute to a remarkable man who figured out the meaning of life and lived it to the fullest.

Demetriou is a mortgage expert with Residential Home Funding and has been ranked in the top 1 percent of loan originators in America for over 10 years in a row. Now he is an author sharing 15 of his grandfather’s lessons and much more in his new book.

“He left home at 16 years old with nothing but a passion to get ahead in life no matter what,” Demetriou said.

Haralambos “Charlie” Pistis grew up on the island of Cyprus but left his childhood behind to head out into the world and stake his claim. He left penniless but retired a millionaire at age 60, enjoying 37 years of retired life before passing away at the age of 97.

But there’s more to his story than a quest for fortune.  It’s also the story of an immigrant overcoming obstacles by bringing to the world the best he could offer, and teaching what he learned to his grandson.  Demetriou wrote the book “to share my grandfather and mentor with the world, to inspire, motivate and empower all with his story and lessons.” He also wanted to share the immigrant experience of starting with nothing. He wants younger generations to understand the hardships these immigrants went through and the contributions they made toward building America.

“He had such a burning desire and drive inside of him,” Demetriou says. His grandfather found joy in the opportunity to work and the labor of the job. He learned from everyone around him, growing his mind,” Demetriou says. He once said, “I realized at a young age that if I did my work excellently and people liked me … and I was honest and I was trustworthy and had a passion for what I did, I realized it would get me ahead in life.”

Some lessons from his grandfather? Attitude is everything; Never give up; Take risks;  Be joyful;  Believe in yourself;  Be humble; Go the extra mile; Be sensitive to the suffering of others.

Pistis grew up poor on the island of Cyprus. His father was a horse and buggy taxi driver who worked hard to provide for his family. Pistis left high school in his junior year to help his father with the horses, but decided there was more for him out in the world.

They lived next to one of the wealthiest families on the island. “He got to see wealth and what it was like,” Demetriou says.  “Seeing wealth made him ambitious, but not envious. He grew up with the neighbor’s children and they were friends.  Faith would have it that years later those neighbors would come to America and he wound up marrying the girl of his dreams.”

He departed Cyprus by bartering a free ride on a merchant ship to Greece in exchange for feeding and taking care of the animal’s for the 14-day journey. While in Greece he found employment with a lawyer. After two years in Greece, he traveled to London and became a telegraph operator, a position he held for two years until he saved enough money to come to America.

He arrived at Ellis Island on Nov. 15, 1929, three weeks after the fatal stock market crash that marked America’s plunge into the Depression.

“His early years in the United States were rough,” Demetriou says. He settled in Washington Heights, New York, sharing an apartment with six other Greek guys. They took turns sleeping in the bed one night a week and he was barely eating once or twice day. That didn’t last too long because he hit the streets and started shining shoes to make money. “He was thankful to shine shoes because he knew it was a stepping stone to the next job, which did end up coming rather quickly as a bus boy. He found honor and pride in each job he had.” Demetriou says.

When America entered World War II, Pistis ended up as one of the oldest draftees, at age 43. He served on board a naval vessel and was assigned the task of placing artillery shells in the gun turrets, but the 5-foot-2-inch man was struggling with the heavy shells. The captain yelled to him to be careful with the shells or he would get them all killed. He said, “They’re heavy. I’m a small guy. What else can I do? I’m a cook.” The captain immediately reassigned him as a cook, beloved by the crew from that point on, Demetriou says. 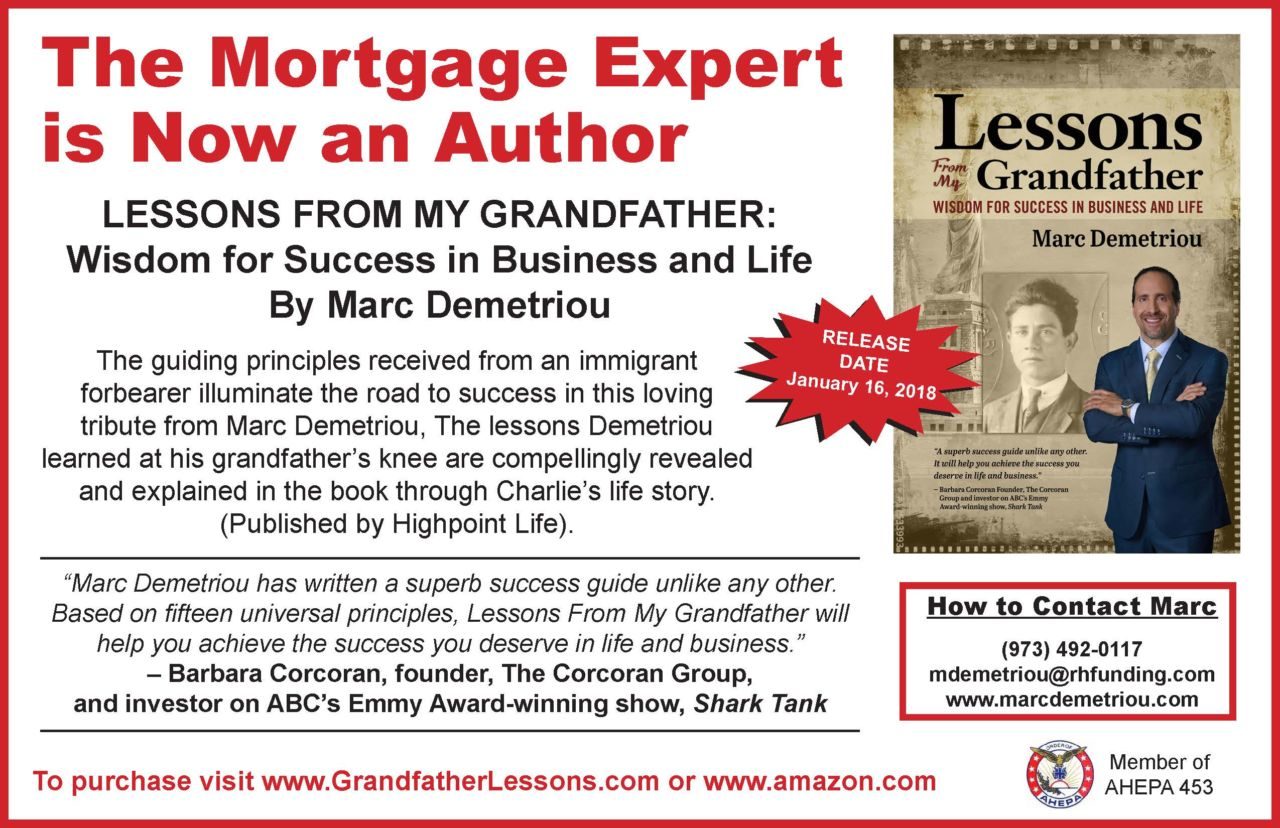 In his career, Pistis went from bus boy, to waiter, to bartender, to manager. He worked his way in to the Zeta Psi Club, a national fraternity clubhouse where he met many career minded college students and highly successful business professionals.   He was a manager there for 27 years and mingled with the wealthiest and smartest people in New York City. When he left to take a job as manager at the West Side Tennis Club, the fraternity made him an honorary member.

Pistis earned the respect of patrons at the West Side Tennis Club. It was a prestigious club that hosted the US Open annually. His grandfather was liked because he genuinely cared for all the guests and also because he took the time to remember their names, what people drank and even where they liked to sit.

He mixed with the likes of Frank Sinatra and John Kennedy Jr.  “Frank Sinatra said to my grandfather, ‘Charlie. You’re the only person I trust in this facility. You have carte blanche access to my tab. If any of my friends come here, you make sure you take care of them. You have my open tab.’”

“Every job opportunity he got was because of who he was.  It wasn’t because of a college degree or anything else. He wanted to help. He was a good guy, hard worker, passionate, trustworthy, honest, fun and joyful. He was magnetic.” Demetriou says.

Pistis retired with homes in North Jersey and Clearwater Beach, Florida and continued to enjoy life with friends and family. “During the retirement years, I always saw him tip the hostess, bus boy and even gave an extra tip the waiter on the side. He had been in their place. He appreciated every soul,” Demetriou says.

Demetriou hopes his grandfather’s wisdom can provide clarity and inspiration that readers can use to recognize their unique talents and achieve their goals in life and business. Demetriou says this to his readers, “Hopefully this makes you a better person, makes you enjoy life and get ahead in life.”

“Lessons From My Grandfather: Wisdom for Success in Business and Life” is available through Amazon. To find out more about the book, visit www.grandfatherlessons.com . You can also find out more on Instagram at @marcdemetriou.