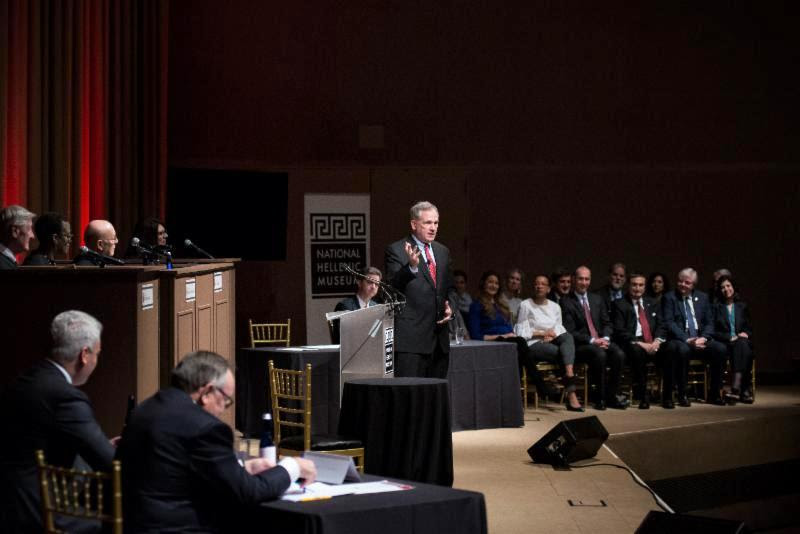 History repeats itself when a guilty verdict is delivered at NHM Trial
A jury composed of community leaders, academics and journalists, along with an audience of hundreds, presented their verdict of guilty to a presiding panel of federal and state court judges in the National Hellenic Museum’s Trial of Megacles, held Thursday in Chicago. This fifth installment of the NHM Trial Series debated whether the ends justified the means when a government leader lied in the name of protecting democracy. On Thursday, just as it was determined in 632 BCE, it does not.
Moderated by WGN’s Andrea Darlas, the event featured a re-trial of Megacles, an ancient Athenian leader who ordered the death of a traitor to the city’s power. When Cylon, a populist Olympian hero, led an unsuccessful coup and then claimed sanctuary in the Temple of Athena, Megacles promised him and his followers a fair trial. Instead, he ordered Cylon’s execution without due process.
The judiciary panel was composed of four judges: from the Seventh Circuit Court of Appeals Judge William J. Bauer, U.S. District Judge Charles P. Kocoras and Cook County Circuit Judge Anna H. Demacopoulos and, new this year, U.S. District Judge Sharon Johnson Coleman.
Prosecuting Megacles for violating the sanctity of supplicants and subverting the laws of Athens were former U.S. Attorney Patrick J. Fitzgerald of Skadden, Arps, Slate, Meagher & Flom and Patrick M. Collins of King & Spalding. Megacles’ defense team was composed of Robert A. Clifford of Clifford Law Offices and Tinos Diamantatos of Morgan Lewis. Christina Faklis Adair of Gozdecki, Del Giudice, Americus, Farkas & Brocato examined expert witness Katherine Kelaidis, Ph.D., a Visiting Assistant Professor at DePaul University.
Attendees of the NHM Trial of Megacles experienced the court in the style of ancient Athens where juries were often composed of hundreds of citizens. An added modern element to this courtroom was the mix of wit and humor in the dynamic legal presentations. All in attendance were in rapt attention following the arguments that made ancient history relevant through modern references. “In Athens, the responsibility to act as a juror was incumbent on all citizens,” said expert witness Dr. Kelaidis. “This is what we did Thursday night. We gave everyone a vote.”
The verdict breakdown was 11 guilty and 1 not guilty among the jury of 12. The jury’s determining verdict was supported by the hundreds of attendees when the scales of justice were literally tipped to guilty by the majority of the voting chips. The esteemed panel of judges unanimously found Megacles guilty, while acknowledging the strength of the arguments by defense counsel.
Share
Facebook
Twitter
Pinterest
WhatsApp
Linkedin
Email
Viber