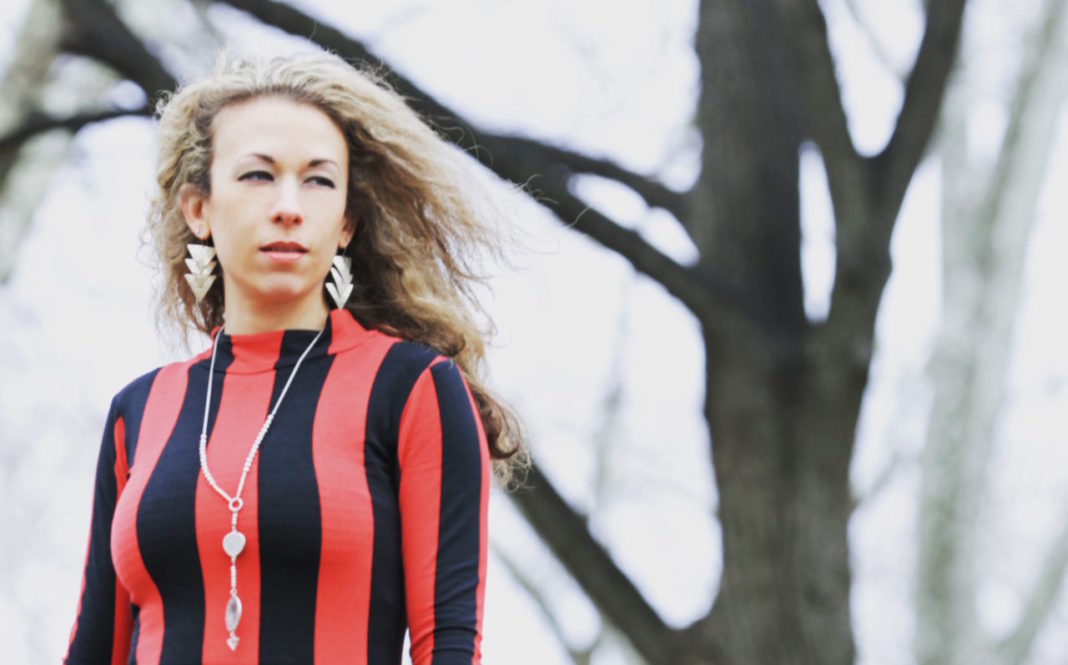 In recent years many international performers have made it to the American shores to spread their wings in any way possible. This would be the case for Greek native Lola de Hanna who took on the music scene with much fervor. At first she actually came to New York to study psychology but her love for music was clawing at her. She eventually looked into performing and recording her own lyrics.

Lola admits that metal, punk and Goth were ingrained in her growing up. Acts like Iron Maiden, Megadeath, The Gathering, The Clash and the Dead Kennedy’s influenced her most. She learned to appreciate the angst and edginess of their music, which she has incorporated into her own style.

She soon established herself as a pop-rock, alternative, electronic and metal singer/songwriter. On her journey to being an independent artist she first offered her vocals as a session singer for producers Gate 57, YZMusic and Timothy House. Her wings would begin to spread as many took notice of her infectious voice. Lola joined the group Chordslinger n Lola which they managed to lock in the #4 position on the Global Reverbnation Charts. At present the duo is not active but talks of working on new music is possible.

Another accolade for Lola was being included in Deli Magazine’s NYC Top 300 charts in the indie-pop category.  As her credits began to grow she would link up with Dembiak Productions and release music for TV & film libraries. It turned out one of the songs was chosen for an ad in Belgium and a children’s show in Australia. The track was entitled “It’s Not Easy”. Eventually, her Greek community took notice and she was invited to appear on RadioNeo and Cosmos FM along with rising Blues –rock artist Afro Nick.

“It was a pleasure to be on the show with Afro Nick who I have performed with. I am looking to link up with him again for some upcoming shows this year.”

Besides Afro Nick, she also performed with Nikolas Christopoulos and collaborated on the track “Looking for Something” with the group Sugar Puppies. At this point of her career, she released her debut EP “The Other Side” in 2015. The EP was a combination of various genres of electronic, indie, pop-rock and middle-eastern sounds.  Lola admits that the first EP featured some of her ethnic music infused into the melodies. One specific track that offers that flavor is “Thin Air”.

“On my first EP it had more of an eastern style and heavy piano. The new EP is more of a personal, reflective not as upbeat as “The Other Side”.”

Besides recording Lola has performed all over New York. Two of her favorite venues are Public Assembly in Brooklyn and Otto’s Tiki Bar on the lower East Side. She has also played the Bitter End but seems to enjoy the more intimate settings. Lola has also performed in her native Greece in Hania, Crete with artist Afro Nick.

Lola would then link up with an ongoing project called Void Vessel that is set up for music submitted for TV and videos. The music was compiled at Mercy Sound Studios and mixed by Kanky Lora from Straight Line Stitch and mastered by Studio Pros. They released a track called “Believer”.

Her talent was growing in many ways and her vocals became a part of larger collaboration overseas. The collaboration was for HIMMEL’s release “A Long Cold Winter” the project was spearheaded by Luca Giancotti and other international singers. Since then Lola was busy in the studio working on a new EP which she recently released.

The new EP is titled “Welcome” which she is working hard to promote. Prior to the EP she released the single “A Place of Fire” which made some noise and well received by blogs like Indie for Bunnies and the Revue.  Currently, she is looking to set up a series of seven shows starting with the Knitting Factory on October 2nd.  Her goal at this point is to perform as much as she can until she feels it appropriate to lash out new lyrics. The new EP “Welcome” can be found on her website and wherever music is sold.