In the Footsteps of Byzantium: Empress Theodora of St. Vitale Basilica 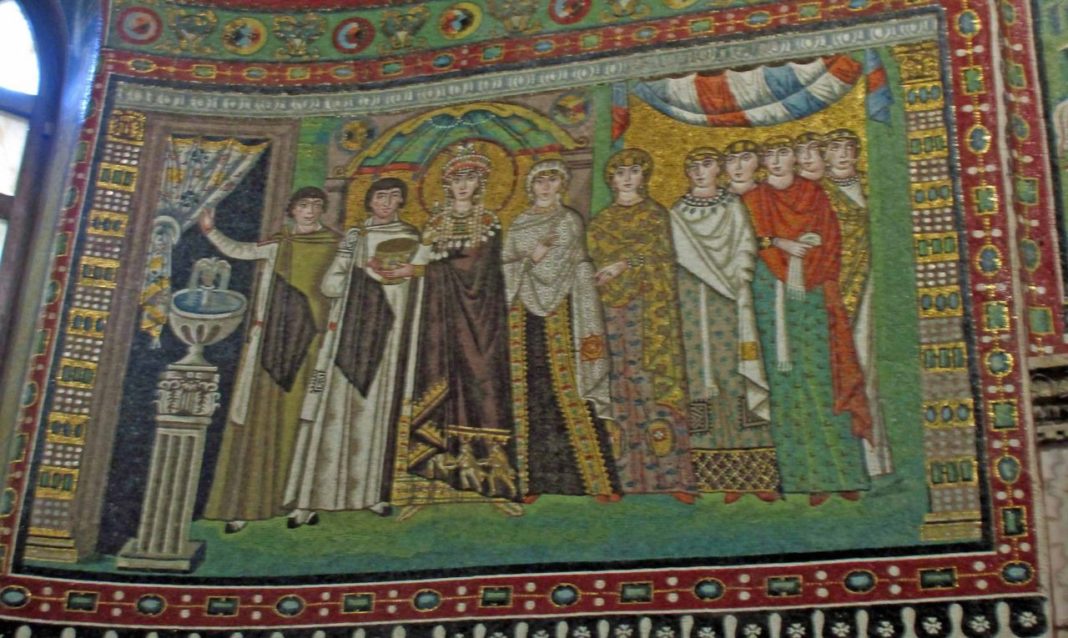 by Catherine Tsounis, Contributing Editor
“I know it’s the belief that women should never show daring in front of men. Never be bold when men hesitate. I know flight is not the answer; even to save our lives.”
― Empress Theodora1
Greek civilization gave us Cleopatra, Macedonian Queen of Egypt. Byzantine civilization gave us Theodora of Byzantium. Both women vilified unfairly by the victors or by surviving ancient and medieval writers. We visited the Theodora Mosaic in the Basilica of St. Vitale in Ravenna, Italy with our guide Marta Chiero.
“Empress Theodora, whose uncertain background was criticized by the historian Procopius and others as being one of disrepute, is also draped in a royal purple chlamys over an embroidered gunna—the etymological root of the modern-day English word “gown.” The bottom edge of her chlamys features a tapestry-woven depiction of what has been convincingly identified as the three magi bearing gifts; the actual garment was most likely woven with gold-wrapped thread. Theodora herself holds up a jeweled chalice, reaffirming her identity as the generous patron of the building.”2

Procopius describes a scandalous person. Let’s look at the facts:

The Nika riots, which began during a hippodrome (stadium that equaled over five football fields) chariot race as a rivalry between two political factions in the year 532, declared a new emperor and overwhelmed sitting Emperor Justinian and his forces. Justinian and his governing council were ready to flee the country when the empress spoke up in the meeting. And because she used part of her short remarks to shut down complaints that a woman should not be speaking in public, we today received a glimpse of how unusual her speech was for its day in the beginning of this article. “The royal purple is the noblest shroud,” Empress Theodora said. Instead of fleeing, the emperor and his officers attacked the rebels, killing a reported 30,000 and saving the throne. Justinian’s general, Belisarius, herded the rioters into the Hippodrome and cut them to pieces No wonder this short speech has been retold again and again through the centuries.3
Theodora was a champion of women’s rights.  She had laws passed which prohibited the trafficking of young girls and changed existing laws impacting divorce to give more benefits to women. Today Theodora is remembered as one of the first leaders to champion the rights of women.4
Theodora was probably the most powerful woman in Byzantine history. Her intelligence and political acumen made her Justinian’s most trusted adviser and enabled her to use the power and influence of her office to promote religious and social policies that favored her interests. Theodora exercised considerable influence, and though she was never coregent, her superior intelligence and deft handling of political affairs caused many to think that it was she, rather than Justinian, who ruled Byzantium. Her name is mentioned in nearly all the laws passed during that period. She received foreign envoys and corresponded with foreign rulers, functions usually reserved for the emperor.5
She also mitigated the persecution of non-Orthodox Christians within the empire. With her husband, she built the famous Hagia Sophia Basilica and transformed Constantinople into one of the most elegant cities of the time. Following the suppression of the revolt, the Emperor and Empress rebuilt Constantinople, making it one of the most elegant cities in the world at the time. They constructed 25 churches, including the Hagia Sophia. They also built bridges and waterways. Theodora may have done more than any ruler in the ancient world to promote the status of women.6
Her death, possibly from cancer or gangrene, was a severe blow to Justinian. Her importance in Byzantine political life is shown by the fact that little significant legislation dates from the period between her death and that of Justinian (565).7
We were happy to see a representation of Theodora in her mosaic at the Basilica of St. Vitale in Ravenna, Northern Italy.
Cover photo: Empress Theodora of the Eastern Roman Byzantine Empire
All photos by Despina Siolas, MD/Ph.D.
References:
1.     https://www.goodreads.com/author/quotes/8096295.Empress_Theodora
2.     https://www.metmuseum.org/exhibitions/listings/2012/byzantium-and-islam/blog/topical-essays/posts/san-vitale
3.     https://sites.google.com/site/persuasionpast/home/empress-theodora-the-royal-purple-is-the-noblest-shroud
4.     https://www.awesomestories.com/asset/view/Empress-Theodora-San-Vitale-Mosaic-in-Ravenna
5.     https://www.britannica.com/biography/Theodora-Byzantine-empress-died-548
6.     http://www.newworldencyclopedia.org/entry/Theodora_(sixth_century)
7.     Britannica.com
Share
Facebook
Twitter
Pinterest
WhatsApp
Linkedin
Email
Viber